One of Amy Reding’s art pieces is of a woman overtaken by blooming flowers of hibiscus and Hawaiian ginger rooted in her neck and chest.

The figure is inspired by Reding herself, who faced Hodgkin’s lymphoma — which metastasized in her neck and chest — twice.

“You feel like your body let you down,” she says. “I just looked at [the drawing] and it brought me some level of peace.”

Reding was 25 and working remotely as a writer in Hawaii when she began experiencing fatigue and a long-lasting cough. After a friend pointed out swelling in her neck, she decided to get checked out. An x-ray soon revealed a mass in her chest.

Within days, Reding flew home to Calgary and received her diagnosis of stage 4 Hodgkin’s lymphoma on June 27, 2019.

“I was in shock,” says Reding.

She began chemotherapy immediately, which shrunk the mass in her chest.

Treatment was a success. Just a month and a half after Reding began chemo, her doctors told her she was cancer-free. She threw a celebration in December before heading back to Hawaii.

With the onset of the COVID-19 pandemic in March 2020, Reding came home to Calgary again following the call for Canadians to return from abroad.

In April, she felt a new lump atop her lymph node scar, and a doctor’s visit confirmed her cancer had returned.

“My heart just broke,” says Reding. “It was such a grieving process for me.”

Chemotherapy this time was much more intense, with new long-term risks including possible impact on her fertility. She stayed at the Foothills Medical Centre through much of August and September.

It was a lot to process, and typically Reding would turn to journalling to make sense of things. But when that felt like too much, she began doodling. That’s what led to her first cancer-inspired piece of the woman in bloom.

While she’s always dabbled in art, her cancer-inspired work was Reding’s first venture into selling it. Buyers responded to her art and her pieces began to sell. Proceeds were initially meant to help offset Reding’s fertility treatment costs associated with possibly freezing her eggs, but they have since become a way to help her support herself during the pandemic.

Reding also decided to donate 25 per cent of sales to the Alberta Cancer Foundation’s Patient Financial Assistance Program (PFAP), through which Albertans undergoing treatment can receive relief for expenses like rent and transport costs. While Reding didn’t access PFAP herself, she says she related to the cause after her own financial concerns.

So far, Reding has raised more than $600 for PFAP, with matching donations from the Alberta Cancer Foundation bringing the total above $900.

Reding’s drawings have since expanded into a collection called “Superwoman,” still featuring women and flowers, and often inspired by cancer. One print is dedicated to an aunt. Another highlights the difficult treatment choices patients make.

Reding received the news that she was cancer-free again in October 2020. She says her second round of cancer was a lesson in gratitude and acceptance.

“One of the best things I’ve learned is [asking myself], ‘What can I do with what I have around me right now?’” says Reding. “‘What can I create?’” 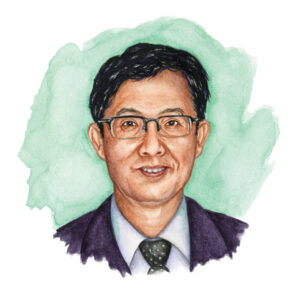