The 14 years after Eileen Rattner was treated for head and neck cancer were among the most challenging of her life.

She was grateful to the medical team at the Tom Baker Cancer Centre in Calgary that helped make her cancer- free, but the treatment’s side-effects were debilitating.

Once an active woman who loved family activities, cooking, baking and singing in the church choir, Rattner, who was diagnosed in 2005, was often unable to speak clearly, let alone sing. Dysphagia (the name for swallowing difficulties) had become not only painful but dangerous. Because Rattner choked and coughed at almost every meal (and aspirated twice, leading to pneumonia), she felt anxious and fearful about eating. Limited to a diet of soft foods and liquids, she lost interest in cooking and baking.

Rattner’s experience isn’t unique. Dr. Jana Rieger has seen countless patients with dysphagia at Edmonton’s Misericordia Community Hospital, where she has worked as a rehab medicine specialist for more than 20 years. Currently the director of research at the Institute for Reconstructive Sciences in Medicine (iRSM) and a professor in rehabilitation medicine at the University of Alberta, Rieger has helped guide the development of a device to help resolve the difficulties many patients face.

Finding a way to improve patients’ quality of life

A desire to make things better is what led Rieger and two colleagues to develop Mobili-T. A pocket-sized biofeedback device, Mobili-T helps strengthen swallowing muscles and, consequently, aims to improve a patient’s quality of life.

“Eating is something we do every day. It keeps us alive and provides us with a lot of pleasure,” Rieger says. “For [head and neck cancer] patients, all of that is taken away and replaced with the fear that every time they eat something or drink one of their blended meals, they’re going to choke and get food in their lungs and not be able to breathe. And, if it gets bad enough, they may have to have a tube in their stomach to receive nutrition.”

Head and neck cancer affects approximately 500 Albertans annually. Treatment usually includes surgery and radiation, both of which can damage the 30 pairs of muscles that enable normal swallowing. Like Rattner, many survivors go on to be cancer-free but must learn to live with the ongoing debilitating effects of dysphagia.

Around 12 years ago, Rieger set up a research protocol to provide intensive therapy to help patients strengthen those muscles. Three times a week for about three months, patients came to the clinic and were hooked up to a machine where they could observe their muscle function while performing swallowing exercises.

The trial didn’t last long: nobody could commit to thrice-weekly hospital visits. Sending patients home with exercises didn’t work, either: there was little motivation when they couldn’t see what they were doing. Most gave up. At the time, Rieger’s staff included two biomedical engineers and a speech-language pathologist, the latter of whom proposed making a small, mobile version of the machine. The team got to work. In 2014, the Alberta Cancer Foundation provided them with funding for the device that eventually became Mobili-T. In 2019, the team began an Edmonton-based feasibility study to see how it worked with patients.

“It will change the way we understand patients who have dysphagia and how exercise helps them.”—Dr. Jana Rieger

Rattner had long since resigned herself to living with a significant swallowing disability when she learned about the study in Edmonton. Her post-treatment rehab had not significantly improved her dysphagia, so she leaped at the opportunity to fly to Edmonton to pick up a Mobili-T, learn to use it, and bring it home to test it out.

“Mobili-T was a life-changing therapy for me,” she says. “The specific exercises target the muscles that you use in swallowing. It’s easy to use. The biofeedback technology immediately gives you information with each and every swallow, so you can practice and gradually strengthen your swallow.” Mobili-T is about the size of a thumb drive and weighs 15 grams. It attaches under the chin with adhesive strips and works in conjunction with a mobile phone or tablet. The software sets daily targets for users and also tracks and stores information in the cloud for clinicians.

Rattner was guided through the program by Gabi Constantinescu, the speech-language pathologist who completed her PhD work on the device. Her encouragement motivated Rattner, who likened the experience to being “part of an exercise class and having others with you.”

That kind of motivation is key to getting people to use a device, says Rieger. By the end of the trial, which wrapped up in February 2020, almost 80 per cent of the participants had done their exercises 100 per cent of the time, which is rare. “Typically, only about 20 per cent of patients do that,” she says.

Mobili-T became available in the United States in September 2020. Because Canada has a different regulatory structure, the device isn’t yet on the market here. Rieger says a larger, Alberta-wide clinical trial is in the works, but the pandemic has pushed back the start date.

Although Mobili-T was designed for head and neck cancer patients, Rieger is optimistic that it can improve the quality of life for elderly dysphagia patients, people who have had strokes, and those with Parkinson’s disease, ALS, MS and brain injury.

While waiting for the Alberta trial to get underway, Rieger and her team at True Angle, the company she formed with Constantinescu and biomedical engineer Dylan Scott, continue to improve the Mobili-T software. They are looking forward to collecting data from users in the United States: the more information they have, she says, the better the device will be.

“It will change the way we understand patients who have dysphagia and how exercise helps them. That is really exciting for us — it’s the most exciting thing about this.” 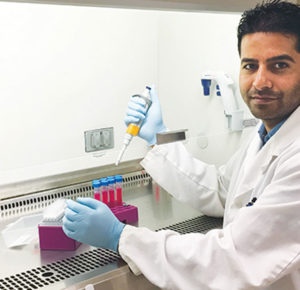 Next Gen: Tanveer Sheikh works to find a cure 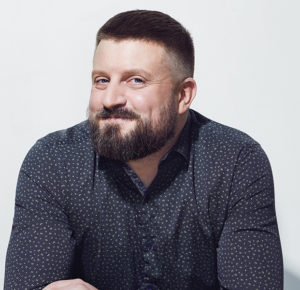