For Gelaine Pearman, donating her time and money to causes close to her heart, including supporting cancer patients, feels like a meaningful and practical way to give back.

Pearman’s connection to cancer is personal. Her parents both passed away from the disease when she was in her early twenties, leaving her and her four siblings to care for each other. Her husband, Cam, is currently receiving treatment for colorectal cancer, and Pearman was diagnosed with breast cancer in 2007. At the time, she was given around a 55 per cent chance of surviving beyond five years. Fortunately, she is defying the odds, and then some.

Over the years, Pearman has been actively involved with several not-for-profit boards in Calgary. She served as chair of the Breast Cancer Supportive Care Foundation for three years, an organization providing leadership in developing and delivering supportive care to people diagnosed with breast cancer. And, in 2016, Pearman was appointed to the Alberta Cancer Foundation Board of Trustees.

“I believe in being involved and active in my community. I’ve had lots of cancer in my world, so I have seen the dramatic difference in cancer care now, compared to when my parents went through it,” she says. “We’ve advanced through research and also by listening to the patients’ needs — we have a fantastic cancer-care system in Alberta.”

Pearman knows first-hand that a cancer diagnosis can be a stressful time from both a financial and emotional standpoint. She recalls feeling alone as her family navigated her parents’ cancer diagnosis but is inspired by the advancements and level of support available to patients and their families today.

“The Patient Financial Assistance Program came from the grassroots level; from hearing the needs of the patients and their families, saying, ‘I’m struggling to put food on the table and to make it to my appointments.’ But there are also programs to help with psychosocial support for patients and their families, too, and that is hugely impactful because if the patient passes on, it’s the family that’s left behind,” she says.

“Big or small, whatever people can afford, whether that is time, money or both, it makes a bit impact” — Gelaine Pearman

“I understand how complex and diverse the health-care system is,” she says. “[We] need to be a close partner with Cancer Care Alberta, as they are responsible for delivering cancer care to Albertans, but at the heart of it all is the patient and their families, so there’s a lot on the line.”

Over the years, Pearman has donated to and supported many initiatives and community events, including the Enbridge Ride to Conquer Cancer, an annual summer cycling event in support of the Alberta Cancer Foundation that raises funds for cancer research, treatment and care.

Most recently, Pearman has contributed to a matching gift as part of the Foundation’s 2020 end-of-year campaign. Her funds have been put towards a range of investments from supporting emerging priorities to rural cancer centres throughout Alberta.

“We want to ensure that we have representation from rural and smaller centres, not just Edmonton and Calgary, so we are truly a provincial organization,” says Pearman.

While some donors direct their funds to specific programs, research, clinical trials or treatments, Pearman provides support to wherever the need is greatest, giving the Foundation the flexibility to invest money where it is needed most.

“Big or small, whatever people can afford, whether that is time, money or both, it makes a big impact. The innovations and research [projects] are so inspiring. It just gives me hope.” 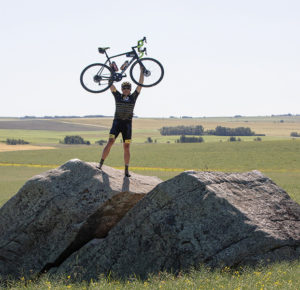 Under the Tuscan sun