Faced with the uncertainty of entering their own cancer journey, the joyful environment Guzzwell has fostered at the GPCC can come as a surprise to newcomers, though the approach is at the core of what she brings to her role.

“Kindness is the philosophy that I walk in here with every day,” says Guzzwell. “If we can make part of [the patient] journey more comfortable, if we can put a smile on their face, if we can, for even a half-hour, take their mind off the worries that they have, we’re certainly going to do that.”

Guzzwell is the ambulatory and systemic therapy unit manager at the GPCC, where she’s overseen the outpatient cancer treatments for Grande Prairie and a wide range of surrounding communities for the past four years. It’s a position that calls for diligence in heading new initiatives and ensuring the cancer centre continuously offers the best treatment options available. It also involves overseeing day-to-day treatments, which include chemotherapy and biotherapy, with an extensive team of medical professionals.

While paperwork and administrative tasks occupy a good portion of her time, Guzzwell also makes a point of doing twice-daily rounds of the GPCC, checking in with staff and patients to gather feedback and connect with everyone. “I know the patients that are in the clinic,” says Guzzwell. “I’m trying to create an atmosphere that’s as positive and inviting as it can be, for both staff and patients.”

Guzzwell was prioritizing personal connections long before she arrived at the GPCC.

Originally from Newfoundland, Guzzwell initially pursued a career in social work, although her education is diverse and varied. She received a bachelor of arts specializing in sociology and psychology, a bachelor of social work and a diploma in criminology from Memorial University of Newfoundland. She went on to obtain a masters of arts in social work from Rockville University in the U.S. She also holds a variety of diplomas and certifications, including qualifications in palliative care and supervisory management.

Guzzwell’s social work pursuits initially drew her to roles in community and institutional corrections — while living out east she organized individual and group counselling in prisons and federal halfway houses, developing connections in challenging environments.

Guzzwell’s interest in health care was first sparked in the early 2000s while she was living in Norman Wells, a small town in the Sahtu Region of the Northwest Territories. As manager of Child and Family Services for the region, she helped facilitate adoptions and provided a range of family violence, alcohol and drug counselling. Much of the job entailed working directly with health centres.

“I discovered that I really liked the health centre aspect and helping people get matched up with the services that they needed,” says Guzzwell.

In 2006, Guzzwell made the move to Alberta, where she worked in a variety of roles with the Peace Country Health region including a job as an accreditation advisor in Grande Prairie in 2013. The accreditation position involved ensuring best practices throughout northern Alberta, travelling and assessing community health facilities in the region. This process gave her insight into the challenges rural health-care providers often face, and the ways facilities can overcome them.

In her own community of Grande Prairie, where she lives with her husband, Paul, and their two dogs, Parris and Lucky, Guzzwell clicked with the high level of care and services being provided at the GPCC, leading her to find her current manager position.

“I worked with the people here, I got to know the program and certainly believed in what they were doing,” she says. “I discovered that I had a passion for helping the staff here deliver services to patients.”

While the jump to health care represented a major transition in her life, Guzzwell says previous skills made the move feel natural.

“The skills that I had, even in corrections with regards to listening, being accountable and intuitive, transferred over to my job in Norman Wells,” she says. Those skills, combined with her understanding of best practices and experience helping people get medical services were immediately put to use in her current position at the GPCC.

Guzzwell’s continued efforts ensure the GPCC is at the forefront of cancer care for both patients and staff.

“We make sure that the care we’re offering here in Grande Prairie matches the cancer care that you’re going to get anywhere else Alberta,” says Guzzwell.

Beyond typical treatment, this translates into services such as psychosocial therapy, an on-site dietician, a dedicated pharmacy and more. Following the completion of the new Grande Prairie Regional Hospital, scheduled to open later this year, Guzzwell notes the programs and treatment offered through the new, larger cancer centre will further expand to include a full range of radiation oncology services, eliminating the need for certain patients to travel to Edmonton.

Guzzwell has also helped shape improved education initiatives at the centre, most notably the patient navigator program, an initiative largely made possible thanks to the generosity of Alberta Cancer Foundation donors. Through individual and group teaching sessions, the GPCC offers information and preparation for patients and families, with guidance from diagnosis and onwards through the cancer journey. Guzzwell says the program has been invaluable in alleviating patient and family stress, shining a light on what to expect and preparing patients to take on treatment with more confidence.

Creating a more comfortable and welcoming environment is also a key part of Guzzwell’s leadership philosophy. During her rounds at the centre, she checks in with staff to ensure they have all the required resources in place to extend the best possible care to patients — a key element in the whole operation running smoothly. Beyond the operational aspects, the connections she’s developed with staff have allowed her to thrive in her role.

“I care about my staff. I can tell you their husbands’, wives’ and children’s names,” says Guzzwell. “Staff are why we’re successful and able to do what we’re doing for patients.”

While the tight-knit community was part of what attracted Guzzwell to the GPCC, its location also comes with some challenges. Due to the surrounding rural landscape, the GPCC serves patients within a radius that stretches to the B.C. border to the west, the Northwest Territories border to the north, Grande Cache to the south and midway through the province in the east. The area served makes it the largest geographical patient base of any cancer centre in Alberta.

To reduce the need for patients to travel long distances, Guzzwell has helped usher in an emphasis on providing Telehealth options. From the GPCC, the resident radiation oncologist can connect with community doctors to organize virtual appointments and check-ups for patients close to their homes. The initiative has seen follow-up appointments, which previously warranted multi-hour drives, replaced with videoconference.

“The same thing would occur as if they were in the room except it’s safer for some patients not to travel,” says Guzzwell. “We try to minimize travel for them as much as possible.”

Carol Robertson, former CancerControl Alberta director of Cancer Care teams for Northern Alberta, worked with Guzzwell when she oversaw the GPCC. Robertson says finding solutions to challenges such as reducing unnecessary travel for patients exemplifies the level of care Guzzwell and her team provide.

“It sounds mundane, but it can be very challenging for frail patients and their family or support to get to the cancer centre,” says Robertson. “Sandra and her team are attuned to those issues.”

Beyond her memories of Guzzwell’s care for patients, Robertson says the environment Guzzwell fosters for her staff stands out from her visits to Grande Prairie. Robertson notes Guzzwell is always quick to give credit to others and exhibits pride in her team, creating an infectious positivity within the walls of the GPCC.

“It’s always fun going up to see them,” says Robertson. “It has that sense of family and a very close-knit environment.”

Recently, Guzzwell says a new patient came to the centre shortly after being diagnosed with cancer. Noticing the man’s natural hesitation ahead of his first treatment, she introduced herself, welcoming him into the family dynamic at the GPCC. While still hesitant, she says the patient began asking questions and making conversation, finding ease in the friendly environment fostered by Guzzwell and her staff. After the first six hours of treatment, she recalls the patient standing and hugging his nurse.

A few weeks later, as the same patient returned to the GPCC, Guzzwell says his greeting spoke volumes to the resonance of her and her team’s approach. 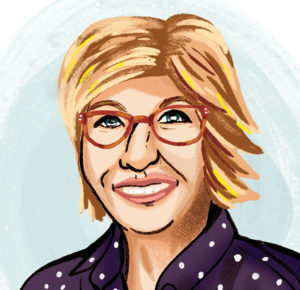 The Importance of Community-based Support Programs 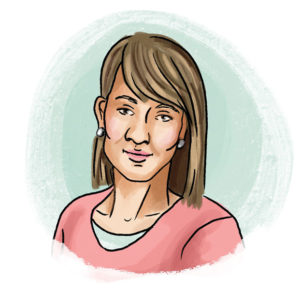