Created in 1941, the Edmonton Civic Employees Welfare Chest Fund raised money to support veterans and their families during World War II. Today, this funding machine — which was renamed the Edmonton Civic Employees Charitable Assistance Fund (ECECAF) in 1945 — consists of nine unions/associations and almost 14,000 employee members. Managed by a board of directors, the non-profit collects over $1.2 million annually from member contributions (employee contributions represent one quarter of one per cent of salaries). Operating under two separate trust agreements — Educational and Financial Assistance Fund and Charitable Assistance Fund — the fund provides scholarships for members’ children and helps finance the work of registered charities in the capital region.

From 1996 to 2016, ECECAF donated over $1.3 million to the Alberta Cancer Foundation, a charitable organization close to the hearts of many members.

“Many of our members have travelled the hallways of the Cross Cancer Institute (CCI). They know it all too well,” says Reg Meinczinger, a training specialist with Capital Power who is secretary-treasurer on the ECECAF Board and a representative of Unifor 829.

According to Brenda Waluk, former ECECAF board chair and a project manager with the City of Edmonton, ECECAF’s funds have been directed toward two revolutionary pieces of technology for the CCI — a positron emission tomography (PET) MR scanner and a made-in-Alberta linear accelerator (Linac) MR machine. Waluk played an instrumental role in allocating funds to the CCI. “I was honoured to be part of this donation decision,” she says.

These investments have been game-changing for patient experience at the Cross. The Linac MR, for example, merges the imaging abilities of an MRI system with the treatment capabilities of a Linear Accelerator, meaning doctors can see and treat cancer with radiation using real-time MR imaging. Thanks to the ECECAF’s incredible generosity, the PET MR has been in use since 2018 and the Linac MR will be ready for clinical use later this year. ECECAF has a proud history of supporting charities related to cancer. These include Kids with Cancer, Children’s Wish Foundation, Make-A-Wish Foundation and Rainbow Society. It has also donated to cancer-related research conducted through the department of surgery at the University of Alberta.

In addition, ECECAF provides assistance to other health charities, as well as to education, welfare and culture sectors. It has touched the lives of thousands of people through donations to approximately 80 groups, from $1,300 to the Alberta Council on Aging in 1995 to $2 million to build a tower at NorQuest College in 2018.

Dollars donated to charities are targeted for specific projects (a recent renovation of the intensive care unit at the Stollery Children’s Hospital, for example). They cannot be used for wages or day-to-day operations. This type of donation model represents 75 per cent of annual ECECAF distributions, with the remaining 25 per cent of monies going to post-secondary scholarships for members’ children. Funds are distributed in accordance with the rules and regulations of the Canada Revenue Agency. In return, charities provide impact statements back to the board to demonstrate how meaningful the donation has been. This can be brief write-ups about projects, photographs and/or tours highlighting special events or services. ECECAF accepts applications year-round from scholarship hopefuls and charities. The nine board/association representatives meet monthly (except during the summertime) to make decisions about recipients.

“Board members feel honoured being part of a well-run, organized group that operates with integrity, grace and dignity,” says Meinczinger. “And employees feel a proud sense of ownership.”

In a tough economy, this model works well and generates a secure, predictable amount of income. Meinczinger suggests other employee groups consider something similar to help their communities.

“You might find yourself needing these charities one day, so you want them to be well supported,” he says. “You are paying it forward.” 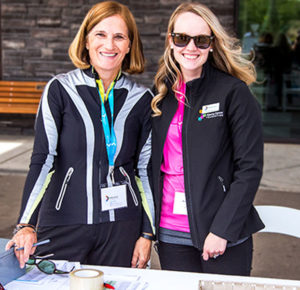 Don and Rita Bosch make a lifetime of commitment