From spending winters in California  and summers in the Okanagan to celebrating 50 years of marriage in the Mediterranean, travel has been a big part of Larry and Joanne Pollocks’ lives.

“Travelling has given us such an appreciation for our way of life in Canada and exposed us to fantastic cuisine from different countries, as well as terrific scenery and historical sites,” says Larry.

While travel has been important to  the Pollocks since Larry retired from his role as CEO of Canadian Western Bank  in 2013, it certainly hasn’t been their  only focus. The couple, who live in Edmonton, have also continued to foster their long-time commitment to community involvement, both as volunteers and as donors.

Over the years, they have funded kids’ camps and financial literacy programs. But when a dear neighbour died of cancer five years ago, the Pollocks decided they wanted to do something even more significant — with a personal twist.

In 2015, they created the Pollock Family Foundation as a vehicle for their philanthropic donations. Following its creation, they continued to support various charities and planned a donation for cancer research — in memory of their neighbour.

Then the unthinkable happened. In 2017, Joanne was diagnosed with  endometrial cancer. She had surgery using the da Vinci Surgical System (which  allows surgeons to perform minimally invasive surgeries with robotic tech nology,) at the Lois Hole Hospital for Women in Edmonton and is now,  thankfully, cancer-free.

Grateful for the exceptional care Joanne received, the couple began conversations with staff at both the Royal Alexandra Hospital Foundation and the Alberta Cancer Foundation about how they could contribute financially to the quest to conquer cancer. In 2018, they entered into a commitment with both funding groups, through which the Pollock Foundation will dispense a certain amount of money per year to each foundation for five years. These moneys are not targeted. They will  be spent at the discretion of the two foundations.

“I wanted them to point the hose at the biggest fire,” Larry says.

For the Alberta Cancer Foundation, one of the priorities the Pollocks are supporting is improving treatment for bone marrow patients at the Cross Cancer Institute. Specifically, the demand for malignant hematology stem cell transplantation is on the rise at the Cross. Between 2016 and 2017, there was an increase of 31 per cent in the number of referrals the facility received. Having a dedicated space, the latest technology and the right people in place will mean the Cross and its patients can be at the forefront of innovation.

In addition, the Pollocks have engaged in a “matching donor” campaign with the Alberta Cancer Foundation, where they and another family will match donations that come in so each dollar goes three times as far.

Today, the Pollocks have two grown children and three grandchildren and are also part owners of the Play Estate Winery in Penticton. In his retirement, Larry continues to find other ways to give back, as well; he provides financial mentoring to a young technology guru and sits on two corporate boards.

Donating money is one way to help the cancer community. But according to Larry, it’s not just the money you personally donate that is significant. “It is the effort you put in — whether it is by raising money, volunteering, mentoring or being on a board,” he says.

He recommends making other people aware you have donated or served on a board as a way to steer friends and colleagues to worthy charities and causes.

The Pollocks are pleased to enter into this kind of philanthropic framework. It is also their way of saying thanks to the cancer community who supported Joanne when she needed it most.

“Dr. Valerie Capstick (an oncologist at the Cross) was absolutely terrific looking after Joanne,” says Larry. “It turned out well for us.” 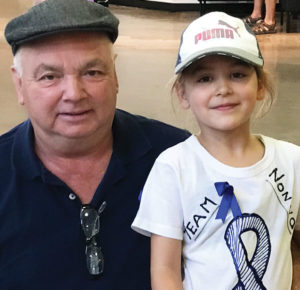 How a Six-Year-Old Started the Tiny Prancer vs. Liver Cancer Run