For more than 30 years, Calgary’s Tom Baker Cancer Centre has been providing excellent care for patients, but as the city grows, the centre has begun to run short on space to meet the needs of the growing population.

Over those same three decades, PCL has supported the Alberta Cancer Foundation as donors, sponsors and participants in events — all in the hopes of helping Albertans facing cancer. Now, the company has been awarded the chance to use its expertise to design and build Calgary’s brand-new cancer centre.

Plans for the development of the new Calgary Cancer Centre (CCC), which will be located at the Foothills Medical Centre, were announced in 2015. In 2017, after a rigorous competition process, PCL was awarded the contract for the facility. PCL is an employee-owned construction company that operates in Canada, the United States, the Caribbean, and Australia, and has offices in Calgary and Edmonton. “Our approach [to designing and building the CCC] has been to focus on creating a high-quality building,” says Toby Hendrie, senior construction manager of PCL in Calgary. “When people walk into the front door, we want them to feel like they’re in the right place and know they’re going to be treated with respect and given a fighting chance of getting through it.”

Set to open in 2023, the CCC will be a first-rate cancer treatment centre, providing state-of-the-art care to those in need from across southern Alberta. The 127,000-square-metre facility will have approximately 160 inpatient beds, 100 exam rooms, 100 chemotherapy chairs, and more — a significant addition to cancer care services in the province.

Hendrie has spent many years constructing health facilities while in his role with PCL — including helping in the creation of the $1-billion Victorian Comprehensive Cancer Centre in Melbourne, Australia, and renovations to the Cross Cancer Institute in Edmonton — but the cause became more personal last year, when he lost his brother to the disease.

“It was tough,” he says. “I have a real personal interest in making sure that we’re doing a great job to build this right.”

In designing the CCC, with input from staff, physicians, and patient and family advisors, the PCL team wanted the facility to evoke a sense of welcoming. From a bird’s-eye view, the building itself is meant to mimic the appearance of two people hugging, with two of its four branches enveloping the other two.

“It’s a very pure vision of two people in an embrace,” says Hendrie.

After being a part of building cancer centres around the world, Hendrie emphasizes that it’s important to think of the people on the ground.

“I’ve gone to see patients and families on site after a cancer centre is complete, and I get to see their reaction,” he says. “Those moments stand out because I know that what we built will help thousands of people every year. [Cancer] is such a common disease, all of us have been impacted in some way.”

As well as helping to improve the lives of cancer patients through the design and construction of the CCC, PCL’s offices in Calgary and Edmonton have provided sponsorships, donations and support to the Alberta Cancer Foundation for the Tom Baker Cancer Centre and the Cross Cancer Institute through various past events, including Edmonton’s Bust A Move and the Tom Baker Cancer Centre Golf Classic. This year, PCL will be sponsoring the Alberta Cancer Foundation Golf Classic and is part of team “Building Hope” in the Enbridge Ride to Conquer Cancer.

“The odds of getting cancer in your life are now almost one in two,” Hendrie says. “It makes an impact wherever you live. Here in southern Alberta, we want to know that we’re doing our part to give back.” 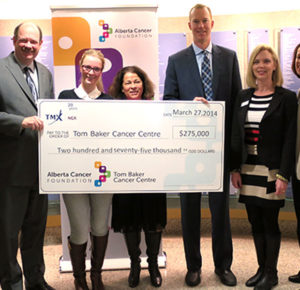 Donating a day of work 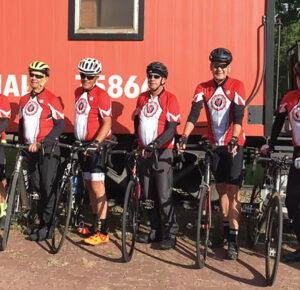