After skiing with a friend in March 2016, Cheryl Goodwin was driving to her cabin in Fairmont, B.C., for the weekend when she felt a lump on her right breast. She had a feeling that it might be breast cancer but didn’t know for sure, and Goodwin had to wait until Monday to talk to her general practitioner. Her doctor scheduled a mammogram the following Wednesday, and within a matter of days Goodwin was diagnosed. Having supported her mother through breast cancer a few years earlier, Goodwin knew exactly what she wanted to do — have both of her breasts removed. Goodwin opted out of breast reconstruction surgery. She also made the decision to not go through radiation or chemotherapy after she did further genetic testing, called Oncotype DX, to confirm that she was at low risk for cancer recurrence.

April 15, 2019, marked her third year cancer-free, but Goodwin hasn’t slowed down in her job as principal of a company called good nrg consulting or her hobby as a travel photographer. Along with exploring the globe with Beanie, a stuffed animal she travels with, and co-captaining the Women on Wheels team for the Enbridge Ride to Conquer Cancer, the nearing 50-year-old is passionate about sharing her journey with cancer. Here, she reflects on remission.

“[Now that I’m in remission] I have new awareness about my body. My joints are falling apart, because I’ve had such a great life exploring the planet, but if some weird bump comes along on my body — I’m just hyper aware of that type of thing, now. I can’t imagine going through [cancer] and not being that way with yourself. But maybe some people aren’t — we all cope differently.

“For me, I’m not worried about it coming back. I’m aware, of course, that it can, but you can step out of your front door and get hit by a gravel truck — it’s just life.

“And of course, not having breasts. I was [recently] at the [annual] Breast Reconstruction Awareness Day at the Foothills Medical Centre. [A plastic surgeon and I] had our own table, and it was really amazing because this one woman and her husband came over and she asked, ‘What made you choose to stay flat?’ I just told my story. I looked up at her husband as I was finishing and he was getting tears in his eyes. He said, ‘Listening to [you], it’s like [my wife] talking,’ and they both started tearing up. If I can help anyone’s journey be clearer — I just want to help other people. It’s so nice to be able to give something back, and I think part of that for me is the emotional healing [aspect of breast cancer].

“I don’t think I’ve ever been angry about [my cancer diagnosis]. It was never, ‘Why me?’ It was, ‘Why not me?’ Because I’ve had such a good life, I take it as this is the way my journey is meant to be, and how do I make the most of it.

“[Since my diagnosis] I have been slowly getting my life as simple as it possibly can be. That’s another thing that has happened since the cancer: I want to be able to experience life as it comes, with as simple a footprint as I can put down.

“I think [the cancer] made me a better person and a better human being. The travel taught me how similar we are as humans, but the cancer has made me more authentic and more genuine.

“Not that I used to be a false person before. The best part of this is I don’t ever have to wear a bra again in my life. I am who I am and you can love me or hate me. I want to be happy and healthy and comfortable.

“I read about other women who’ve had cancer and are in remission and [some say], ‘I’m going to eat everything that this article and this diet says.’ My journey is, ‘I’m going to be as healthy as I possibly can, but I’m going to live every day as full as I can possibly make it.’ If I want to eat a hamburger and drink a glass of wine, then that’s what I’m going to do.” 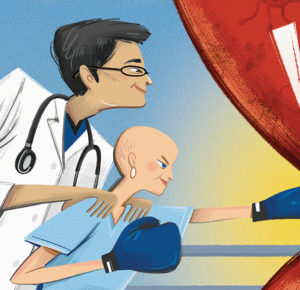 Getting Personal With Dr. Xiaofu Zhu 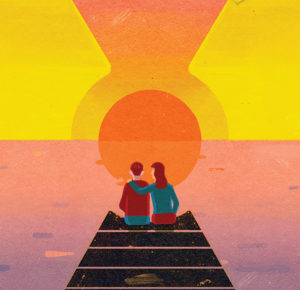 Getting Personal With Cynthia Stulp