Dr. Michael Chu is convinced immunotherapy is a game-changing treatment in the stand against cancer, and he sees the potential for this type of medicine as nearly limitless.

“For decades we’ve been relying on surgery, chemo, and radiation, [but] immunotherapy has really changed how we look at oncology. We can now target the actual cancer cells directly through this treatment,” says Chu, a clinician and researcher at the University of Alberta’s (U of A) department of oncology. “It’s changed melanoma from an entirely palliative disease to something where about 50 to 60 per cent of patients are cured of it.”

Chu, 34, is a born-and-raised Edmontonian who did his medical training at the U of A. Four years ago, his career focus shifted to immunotherapy after a combined clinical and research fellowship at Stanford University in California. Now a member of the Cancer Research Institute of Northern Alberta (CRINA), and currently practicing at the Cross Cancer Institute in Edmonton, Chu is leading the development of a clinical trial to manufacture CAR T-cells in Alberta to treat leukemia and lymphoma.

A breakthrough immunotherapy approach to treating cancer, CAR T-cell therapy is an adoptive cell transfer (ACT) approach that involves collecting and using the patient’s own immune cells to treat their cancer. T-cells, known as the workhorse of the immune system for their ability to find and kill cells infected with a pathogen, are genetically modified using a disarmed virus.

“The virus introduces the gene that does the manipulation to the T-cell,” Chu says. “The virus is like the vehicle or the chaperone; the gene is what actually does the action.”

These genetically modified cells develop receptors on their surface called chimeric antigen receptors, or CARs. The newly created CAR T-cells are then reproduced in a lab in the hundreds of millions and infused back into the patient. If successful, the CAR T-cells will naturally proliferate in the patient’s body.

CAR T-cells are programmed by their newly-engineered receptors with a fresh battle plan: first, identify a unique protein, or antigen, that exists on the cancer cell’s surface, then kill it — and only it — leaving healthy cells intact.

CAR T-cell therapy has shown to be incredibly effective in treating patients with relapsed leukemia, and lymphoma patients who would have exhausted all other options. While most researchers will shy away from the c-word, Chu calls it a “curative therapy” that has also shown early promise in treating solid mass cancers like breast and lung.

But, he says, as more common types of cancer start being sent into remission using ACT approaches, Canada could see a “crisis of access.”

“The pharma version of this treatment is around half-a-million dollars [American] per patient, so as a society we’re going to have to decide, are we going to bankrupt ourselves in order to do this?”

Enter the latest trial designed by Chu, which aims to begin within the next few months and will take between two and three years to complete. It will treat 57 adult and pediatric patients with relapsed leukemia and lymphoma using “point-of-care” CAR T-cell manufacturing. Rather than outsource the entire process to one of the three companies manufacturing CAR T-cell treatment, Chu will use two manufacturing sites in Edmonton and Calgary to create the “living treatment” for each patient in the study. The trial will also look to further prove the clinical merits of CAR T-cell treatment for relapsed leukemia and lymphoma patients. Chu says the bulk of the funding for this innovative study will be provided by the Alberta Cancer Foundation.

Chu’s trial will still partner with a biologics company to license the virus that carries the gene that manipulates the T-cells. But even with the cost of the patented sequence, point-of-care manufacturing will reduce CAR T-cell treatment to approximately $54,000 per patient — or a 90 per cent drop in overall cost.

In addition to a more sustainable cost for the Canadian taxpayer, the point-of-care model will likely have numerous clinical benefits. Unlike the pharmaceutical model, point-of-care-made CAR T-cells do not need to be frozen because, as the name suggests, the freshly created treatment can literally be walked from the lab to the treatment sites and given to patients.

“I think of it like buying groceries at the supermarket,” Chu says. “We think the fresh cells actually work better than the frozen, so that’s a major plus.” Chu says this system will also eventually cut down the lead time to create the synthetic cells from between 12 to 17 days to a goal of just under one week, which is critical when dealing with patients facing aggressive cancers that may have relapsed several times.

While he is thankful Alberta is fertile ground for this type of initiative (having already built the lab infrastructure), he admits Canada is a few years behind several nations leading the charge in immunotherapy. He’s hoping this trial will help to catch us up, lead to new immunotherapy breakthroughs, and, most importantly, aid Canadians facing cancer for decades to come.

“I’m hoping we’ll lay the groundwork to demonstrate how CAR T-cells can be introduced into the Canadian health-care landscape,” he says. 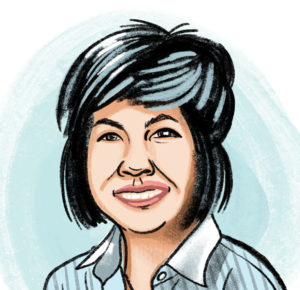 Trevor Campbell is Focusing on Solutions