March is a busy month at Holy Redeemer Junior/Senior High School (HRH) in Edson, Alta. On top of classes and extracurricular activities, students spend many of their lunch hours and evenings participating in a variety of events for the March 4 A Cure fundraiser in support of the Alberta Cancer Foundation. The calendar of weekly events includes bake sales (with a “cake war” competition), candy jar guessing games, a basketball shooting competition, hot lunches for sale and more.

Founder and organizer Michael Bachinsky, who is the phys. ed and industrial arts teacher at HRH, was inspired to start the fundraiser 13 years ago for a deeply personal reason.

“Over the course of a year or two, my Grandpa Bachinsky and my aunt both passed away from cancer,” he says. “March 4 A Cure actually started in my parents’ backyard as an auction with my family and friends. We wanted to support the Alberta Cancer Foundation because it makes an immediate difference close to home.”

When Bachinsky began working at HRH in 2010, he introduced the fundraiser to the school. “When I held my first meeting nine years ago, 25 kids showed up, from Grade 7 to 12, and we just brainstormed. I let them run with it and they took full responsibility for the month of events.”

Every year, HRH student volunteers set a target fundraising goal and decide on what events to run and how to run them, including everything from making posters to managing budgets. This year’s goal was to break the $100,000 mark for the total funds raised since the fundraiser began in 2010.

“We have this core group of volunteers and I always joke, if you talk about the youth of today, these kids are going to change the world,” Bachinsky says. “They’re super keen, super intelligent, want to make a difference and are willing to give their time.”

Over the past nine years some of the fundraising initiatives have been more successful than others. For a few years, students and teachers participated in a head-shave-for-donations event, which left Bachinsky — who let the students choose his shaved hairstyle — with a mohawk, tri-hawk and a “friar-tuck.” When that event lost steam, mainly because students didn’t want to cut their hair or already had, Bachinsky challenged the student volunteers to come up with other fun ways to raise money.

“If the kids are no longer into it, you can’t force it,” he says. “So, there are few events we do consistently, but we also regularly come up with new events every year.”

Bachinsky, who oversees March 4 A Cure, encourages the students to find a balance between raising awareness and raising funds.

“One year, they had an idea to stick a kid to a wall with tape. So, you’d pay $5 and tape a kid to the wall in the gym and see how long they’d stick. But when I looked at the cost of duct tape I had to come back and say, ‘Guys, this is not cost-effective.’”

One event that is consistently successful and a highlight of the fundraiser is the March 4 A Cure Silent and Live Auction. Held this year on March 15, it took place in the lobby of HRH in the evening and was open to the public.

“Students canvas the community for donations the month before in April and the community really rallies around them,” Bachinsky says. “Even in a recession year we were able to get 140 items donated. We had a full concession and there was a dance recital in the gym at the same time, which got even more people through the door. It was really successful.”

When the dust settled, this year’s March 4 A Cure raised a little over $7,000, which left the final tally of total funds raised at $98,000. Despite falling just short of the $100,000 goal, Bachinsky says he and his passionate student volunteers are not discouraged.

“We’re excited to go bigger and better for the 10th anniversary of March 4 A Cure, and the kids and I have already started to brainstorm how we’re going to do that. We know we’ll meet our $100,000 goal next year and surpass it. It’s going to be a celebration of our students, too, and 10 years of amazing volunteer work.” 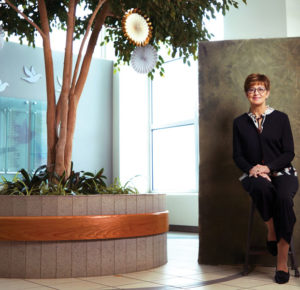 Fundraising for the Cure