At 81, Joan Charbonneau has enjoyed wearing many hats during her lifetime. Formerly a nurse, Joan is a mother, grandmother and great-grandmother, an avid golfer, bridge player, traveller and a passionate advocate for persons with mental disabilities (her son, Dean, 53, was born with Down syndrome). For the last three decades, she has also been a committed donor to the Alberta Cancer Foundation.

Like many donors, the rationale for this long-term relationship is a personal one. Joan’s granddaughter, Taylor, died of childhood leukemia in 1996. Two years later, her husband, Ken, died from complications related to prostate cancer.

“Donating to the Alberta Cancer Foundation is very important to our family,” explains the resident of Alberta Beach. “Losing a granddaughter at the age of four is something you never get over. It is part of our legacy to her (and to Ken) to help others.”

This mission started back in 1990, when Ken was undergoing treatment for cancer. His company, Metals West, began sponsoring the 18th hole during the Cross Cancer Institute’s annual golf tournament at the Derrick Golf and Winter Club in Edmonton.

After Ken’s death, Joan continued the sponsorship. While she golfs during the event, her daughter, Tana, and one of her six grandchildren, oversees the hole, which is now called the Charbonneau Memorial Hole. The hole has a unique feature — golfers imbibe in an assortment of pre-made shooters (B-52s are popular) in memory of Ken, and cookies, chocolate chip or oatmeal, in memory of Taylor.

“Ken believed there needed to be booze at his hole,” says Joan. “And the funny combination gives us the opportunity to talk about our story and cancer’s impact on a family.”

Joan’s own story began on a farm outside Daysland, Alta. She and her family moved into town when she was five. She took her nursing training at the Royal Alexandra Hospital and practised as an operating room nurse for a time before staying home to look after two daughters and Dean. “It was a challenge back then to find after-school care for children with disabilities,” she says.

While parenting at home, she became president of Inclusion Alberta and vice president of the Canadian Association for Community Living. She was poised to become president when Ken became ill, and she turned down the opportunity to care for him. “I learned a lot during my terms and my involvement benefitted Dean as well.”

Today, Dean — who lives with Joan’s youngest daughter, Michelle, and her teenage twins — is retired from the recreation facility at the University of Alberta, where he worked in the equipment room. He now spends his days working out, on a stationary bike and with weights, at his local gym. Tana, 55, works as a vice principal and Michelle, 50, is an accountant with the City of Edmonton.

In addition to the annual golf tournament sponsorship of $3,000, Joan gives $100 per month to the Foundation and makes donations in memory of friends and family members who die of cancer. She has also made a planned giving arrangement in her will. “I don’t believe in giving flowers,” she adds. “I think it is a much better use of dollars to donate to worthwhile charities. The Cross Cancer Institute and the Alberta Cancer Foundation are nearest and dearest to my heart.”

Joan encourages others to donate to research, treatment and support initiatives related to cancer experiences. “Cancer affects every family, and it is such a complicated disease,” she says. “If we can find a cure, it would be a wonderful thing. Any help that we can offer is moving in the right direction.” 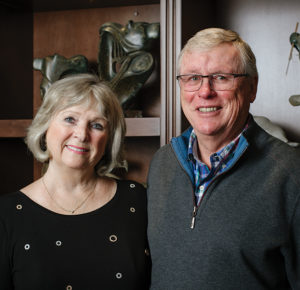