When Mokarram Hossain read a groundbreaking 2016 research paper by Drs. Jing Wang and Paul Kubes, it sparked an idea. The paper determined that immune cells exist not only in our blood, but also in the peritoneal cavity — the space housing our abdominal organs. Hossain asked himself: what if those same immune cells meant to protect us could be fooled into protecting cancer instead?

The notion was so innovative that it led him to win the Alberta Cancer Foundation’s 2016 Fred Coles Cancer Research Fellowship at the University Calgary (U of C), where he currently conducts cancer research under Dr. Kubes.

“I told Dr. Kubes that these immune cells may be very beneficial to injuries, but the same healing property of these cells can be very dangerous for diseases like cancer,” Hossain says.

Dr. Kubes was intrigued by the idea and preliminary experiments Hossain had conducted that involved metastatic colorectal cancer cells that grow in the liver. The results suggested that immune cells could not distinguish tissue from tumour — offering the researchers a chance to solve a previously undetected problem and potentially optimize cancer treatment.

Born in rural Bangladesh, Hossain learned to value academia from his father, a high school teacher. Math and science came effortlessly to Hossain from an early age, but he was uncertain how to apply his talents; meeting people, he says, introduced him to possibilities, and aspirations to teach and work in academia became his focus.

Hossain obtained both a bachelor’s degree in pharmacy and a master’s in pharmaceutical sciences at Jahangirnagar University in Bangladesh in 2007. In 2010, he moved to Canada to obtain his PhD from the University of Saskatchewan in pharmacology. The Fred C. Coles Cancer Research Fellowship brought him to the U of C in 2016, where he works to optimize immunotherapy with his research. (The fellowship ended in March 2019).

When a tumour grows in an organ like the liver, Hossain says, it can rupture the membrane surrounding the organ, which is called a “capsule.” Those existing immune cells in the peritoneal cavity that Dr. Kubes helped discover are designed to heal injuries, fight disease and race to the rupture to assist healing. But they are unable to differentiate between healthy tissue and the tumour — leading the immune cells to sometimes protect the tumour.

“We have found that if you inject immunotherapies directly into the peritoneal cavity you will get [a] much better effect of treatment than if you inject directly into the blood,” Hossain says. Based on this observation, Hossain anticipates that administrating immunotherapies this way will show better effectiveness for people with cancers growing in organs within the peritoneal cavity.

So far, injecting drugs that remove immune cells from the peritoneal cavity first, then burning the tumour with radio-frequency ablation — the use of electrodes to generate heat and destroy abnormal tissue, and commonly used in clinics to treat unresectable liver metastases — has shown promising results.

“I think all researchers actually dream of [doing] something that will be meaningful, that will be translatable, that can be taken to the clinic for the benefit of patients,” Hossain says. “I have the same ambition.”

This ambition is not misguided: Hossain’s work has shown such promise that, in February 2019, he was awarded the Banting Postdoctoral Fellowship by the Canadian Institutes of Health Research to continue working under Dr. Kubes. It is considered the most prestigious post-
doctoral fellowship in Canada.

One can safely assume that through cancer research — and with continued aspirations to teach and to share his knowledge — Hossain has found where to apply his talents.

“If we can make [even] a tiny bit of an impact to help cancer patients, that would be [incredible],” Hossain says. “That’s what we’re striving for.” 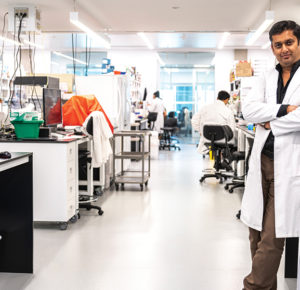