Every game day, the distinctive clanging of cowbells can be heard as fans cheer on the Edmonton Eskimos football team at The Brick Field at Commonwealth Stadium in Edmonton.

But elsewhere in the city, at the Cross Cancer Institute, the cowbell is used to cheer on something else entirely. The Cross has its very own “Bell of Hope” that patients ring once their cancer treatment is completed.

Len Rhodes, president and CEO of the Edmonton Eskimos, hopes to ring that bell this November, when his radiotherapy treatment for prostate cancer is set to finish. He is currently undergoing brachytherapy at the Cross Cancer Institute.

“The Cross Cancer Institute is a blessing for our community, there’s no doubt about it,” says Rhodes. “I just admire all the staff that work there, from the doctors to the nurses to all the support staff. It’s just an incredible place.”

Rhodes was diagnosed with prostate cancer in November 2017, after a routine blood test indicated something was off. “Luckily, I was diagnosed at stage one, and I quickly realized that early diagnosis improves your prognosis and allows you to have so many more options, as far as treatment is concerned,” says Rhodes.

Rhodes’ diagnosis also spurred him to find more ways to give back to his home community of Edmonton, and to the Cross Cancer Institute. After first raising $56,000 through his own network for prostate cancer research, he looked to bigger opportunities.

“I feel like I’ve been given a platform, and I’ve got to use that platform to do whatever I can to help this community and be genuine when I’m involved with a cause,” says Rhodes.

He met with Peter Wilkes, co-chair of Show the Love, a campaign celebrating and raising money for the Cross in honour of its 50th anniversary. After talking with the Show the Love committee, Rhodes pledged to dedicate an Eskimos home game to their cause. The game, between the Eskimos and the Ottawa Redblacks, took place on October 13, with proceeds from cowbell sales and a portion of designated seat sales going to the Cross. A significant centrepiece of that game was the cowbell — thousands were sold to spectators as part of a stirring celebration at halftime that included 50 cancer survivors ringing the bell on the 55-yard line.

“So many people have been impacted directly or indirectly by some form of cancer. It’s really important to bring it to the mainstream so people can talk about it and build awareness around the need for medical attention and annual checkups,” says Rhodes.

As a team, the Edmonton Eskimos have backed other causes before. They had a “pink game” to support the fight against women’s cancers, and also host annual dinners that have raised more than $600,000 for ovarian cancer research at the Lois Hole Hospital for Women. 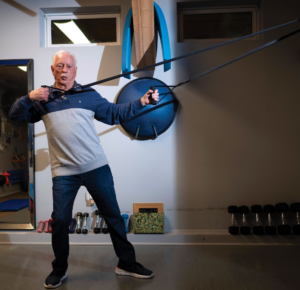 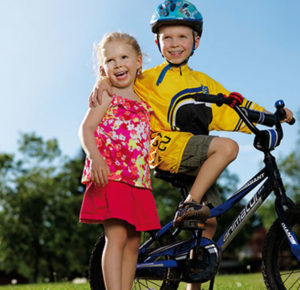