In 2010, Kelly Liebe’s 32-year-old daughter Christina was diagnosed with stage 3 breast cancer. Liebe was at the appointment when the doctor outlined a treatment plan, and the experience was surreal — not because Liebe was unfamiliar with the disease (she survived an identical diagnosis in 1998), but because Christina’s treatment plan was so familiar. During her own illness, Liebe had participated in a clinical trial for people whose cancer had spread to their lymph nodes. The evidence gathered from that trial had
contributed to the development of a high-dose treatment method, the method the doctor was now describing to Liebe and her daughter.

“You know you do clinical trials for other people, but you don’t know you’re going to be sitting with your own daughter,” Liebe says.

No one would describe cancer as kind or predictable, but for Liebe, it’s been an especially cruel nemesis. Liebe has lost friends to the disease. She herself has been through treatment twice. Her daughter was diagnosed with breast cancer a second time in 2012 and lost her life to the disease later that year. And on Boxing Day 2017, her husband, also named Kelly, noticed a lump on the left side of his neck, which was diagnosed as squamous cell carcinoma of the tongue, a form of oral cancer. In April 2018, he began chemotherapy and radiation treatment.

Through it all, Liebe has never lost her determination to help others. She’s taking part in the 10th annual Enbridge Ride to Conquer Cancer, a two-day, 200-kilometre bike ride held each August that raises funds for the Alberta Cancer Foundation. Liebe’s husband first signed up for the ride back in 2012, when Christina was battling cancer for the second time.

“He decided that he wanted to do that for her,” Liebe says. “She was in the hospital when the ride was on and she really spurred her dad on.”

After losing Christina, Liebe’s husband kept riding year after year in his daughter’s memory. Inspired by his determination, Liebe decided she would join him for the 2015 event. She knew it would be a difficult ride, but says she’s always been a “pretty tough cookie,” and she was motivated — she believed her participation would honour Christina’s legacy and support those in need of treatment, now and in the future.

Since that first ride, Liebe has continued to participate. She even took part in the event last year, despite being re-diagnosed with breast cancer and undergoing a mastectomy in early 2017. On the first day of that 2017 Ride, Liebe fell off her bike and sliced her leg, but she didn’t consider stopping. She says she felt lifted (even up the ride’s gruelling hills) by her fellow riders and by the event’s extraordinary sense of camaraderie.

“Whenever I think I can’t, I know there are others who really can’t,” Liebe says.

In the months leading up to this year’s Ride, Liebe has trained through spin classes, running and elliptical training. In six years, the team she’s been a part of, “2xkl2015 & Krew,” has expanded from one to seven riders, including family members and friends she and her husband have made during past rides. Collectively, their goal is to raise $17,000 in 2018.

Despite the heartbreaking loss of Christina, Liebe believes her family has received a lot of support in the form of medical expertise, kindness, friendship and community. She says people assume places like the Cross Cancer Institute are sad, but she knows care centres can be full of friendliness and laughter.

“There are so many talented, professional, care-giving people,” she says. “The connections that you make are connections you carry with you.”

Liebe and her husband Kelly are now raising Christina’s children, a 17-year-old granddaughter and a 16-year-old grandson. Liebe says she hopes one day the word “cancer” doesn’t exist, and that families won’t have to go through the pain of it. Until then, she’ll keep riding and keep giving. “I want to dream big,” she says. “I just love life so much.”

This year’s Enbridge Ride to Conquer Cancer takes place on August 18 and 19. 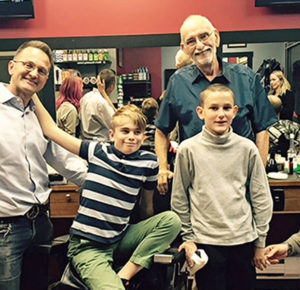