If you’re looking for a low-intensity exercise that can strengthen your body, reduce your stress level and sharpen your mind, it’s time to consider Tai Chi Chuan, more commonly known as Tai Chi.

Developed in China centuries ago, Tai Chi is a martial art form consisting of distinct poses performed in succession, and it has long been respected in Chinese culture for its benefits: extending life, improving health, and connecting mind and body.

“It’s kind of like moving meditation for me, very slow, but very gentle and very focused,” says Danny Lai, a Tai Chi Master who teaches out of his home studio, Dharma-Zen Tai Chi Studio, in Calgary and occasionally leads Tai Chi classes at Mount Royal University.

Characterized by its guiding principle of seeking balance — which comes from the religious tradition of Taoism — Tai Chi requires a person to remain focused and present as each move glides into the next.

Lai stresses the importance of mindfulness and balance even in the way he organizes his classes: before each lesson he and his students have tea together, allowing for a moment to pause and connect.

There are five traditional styles of Tai Chi from which most other styles originate: Chen, Yang, Wu Hao, Wu and Sun — named for the families that developed each one. Originally trained in several martial art forms in Taiwan, Lai utilizes a 99-movement Chen-style approach.

As Tai Chi is based on executing an unbroken flow of a set number of movements, much of its mastery comes with diligent, at-home practice and patience, says Lai. The proper way to execute each movement into the next is modelled in class and then left up to the student to perfect as each class adds more poses.

The meditative and intentional approach of Tai Chi has been shown to lower blood pressure, lessen stiffness and pain, improve sleep quality, and even boost self-esteem. Its slow, methodical movements also make the practice an accessible exercise for people recovering from cancer, as well as for those seeking low-intensity workouts while undergoing cancer treatment.

Currently, the effectiveness of Tai Chi in cancer patients is being examined as part of a five-year Mindfulness and Tai Chi for Cancer Health Study (better known as The MATCH Study) at the Tom Baker Cancer Centre in Calgary and the Princess Margaret Cancer Centre in Toronto, with an aim to recruit more than 600 patients from Calgary and Toronto.

Now finishing its second year, the MATCH Study is gathering feedback from two groups of recovering patients, one group practicing meditation and yoga, the other trying Tai Chi and Qigong (another Chinese martial art connected to Tai Chi and centered on posture, breathing and mental focus). The study will compare how each approach benefits patients, and pinpoint where there might be different outcomes.

“There are few [Tai Chi-focused] studies in cancer care, but broader research shows that Tai Chi can really help people with balance, flexibility and strength, as well as [with] psychological things like stress reduction and decreasing anxiety,” says Dr. Linda Carlson, principal investigator for The MATCH Study and Enbridge Research Chair in Psychosocial Oncology at the Tom Baker Cancer Centre.

Carlson, who has also co-authored a paper on Tai Chi and Qigong’s impact on the quality of life of cancer patients in recovery, says that participants in The MATCH Study are already sharing positive feedback.

One patient who was experiencing peripheral neuropathy (a side-effect of chemotherapy that can cause numbness in the hands) reported that, after practicing Tai Chi and Qigong, “some of the feeling in their hands had been restored,” says Carlson. And another “has found improvement in balance, flexibility and mobility.”

Tai Chi is one of many low-intensity, low-impact exercises that can benefit the body and mind when facing cancer and recovery. Here are three more low-impact ways to get the body moving while reducing stress.

Developed from a discipline associated with spirituality and connection to oneself, yoga’s many benefits include increased strength and flexibility, and it has also been shown to help with high blood pressure.

Adding a regular walk to your routine can have enormous pay-off when it comes to overall health. Not only is walking gentle on the body and easy to start, but by reducing sedentary time you can shed body fat, boost your mental health and improve stamina.

Whether you’re on a machine or on the water, rowing is a simple movement that engages the whole body and improves cardiovascular health. It’s also extremely trendy these days: instructor-led rowing classes are offered at many gyms in Edmonton and Calgary.

The Power of Prayer 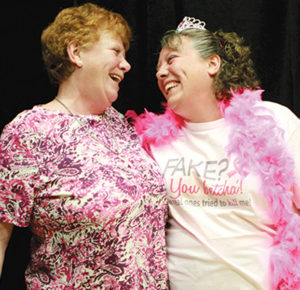