To Tricia Antonini, life is all about living fully in moments with other people.

Antonini has spent much of her life facing cancer. She was first diagnosed with acute lymphocytic leukemia in 1997 at the age of 23. Bone marrow transplants saw her through two occurrences, but the leukemia returned in 2006, and, following successful battles with flesh-eating disease and pneumonia, she was told a third transplant was not favoured. Antonini and her medical team fought hard (and successfully) to receive the transplant and, miraculously, she recovered. In 2014, she was faced with a new challenge: breast cancer, for which she underwent a bilateral mastectomy and chemotherapy. Then, in 2017, at age 42, Antonini discovered the breast cancer had metastasized to her brain, and she is now in palliative care.

Over her 20-year cancer journey, Antonini has found a deep sense of purpose in truly connecting with all those who cross her path: fellow cancer patients in waiting rooms, health-care providers new and familiar, or colleagues she hasn’t seen in years.

“Just a smile, and then starting to talk … the feeling that comes from those conversations and interactions is so good,” she says. “It feels like you’ve engaged the moment. You’ve not just let it float by. You’ve given paint to it, and you’ve taken paint from it.”

An accountant by trade, Antonini has a passion for painting and is an artist at heart. She sees beyond words and circumstance to the masterpiece that is created when people share their stories with one another. “The whole purpose of being here in this human experience is to impact and learn from each other,” she says. “Sharing stories is the best way to do that.”

Antonini has been sharing her own story for more than 10 years through her blog, Tricia’s Tides. The blog began as a way to keep close friends and family up to date on her condition, dissuade visitors when her immune system was vulnerable and acknowledge the lighter side of things through humour to help loved ones feel at ease.

Tricia’s Tides has only grown in importance for Antonini, and, at more than 100,000 page views, her audience has grown, too — readers respond to her experiences and her candour. “Inevitably, you’re hesitant to share bad stuff with people. That’s just the way our society is. But I think there’s such value in sharing where we have challenges and what we’re doing about it,” Antonini says.

She receives feedback from people around the globe about how sharing the details of both her good and bad times has made a difference, however small, in their lives. “Everyone takes something different from the blog because they’ve had a different life, they’ve had a different path,” she says. “People have told me they’ve read [something from the blog] that made them take action. It might just be a slight adjustment to how they were approaching their own challenge, but it helped. That, to me, is the goal.”

The blog isn’t the only way Antonini reaches out to others. A member of the Cancer Provincial Advisory Council and a patient advisor to the Cancer Strategic Clinical Network, she has given countless presentations and speeches and doesn’t hesitate to share her story openly with anyone who asks, including nursing students, hospital administrators and families facing cancer. What some may call bravery is her way of advocating for a smoother road for all patients who may follow in her path.

“The bravery is just in being truthful. And that’s something that can be hard,” she says. “But everyone faces challenges; that bravery is all around us. I’m not the only one [sharing my truth], I’ve just got a cancer label on it.”

Antonini’s cancer journey has also inspired her to create a body of visual art — largely paintings — and short writings that accompany the visuals, to communicate life learnings she’s gleaned since her first diagnosis. Her ultimate hope is to have made a positive impact in others’ lives.

“I hope that I’ve shared and experienced moments with people that they remember, and that they’ve used to move forward with something, or to make their lives more valuable,” she says.

Through her words, her advocacy, her art and her kindness, Antonini has left paint on a great number of canvases — and the paint is there to stay.

In the fall of 2017, the Tricia Antonini Award was established as a way to honour Antonini’s years of advocacy and leadership in smoothing the road for cancer patients. Supported by the Alberta Cancer Foundation, the prize recognizes anyone (including patients, families, health-care workers and organizations) who has gone above and beyond to make a positive difference for bone marrow transplant patients. In Antonini’s words, “[It] is for anyone who has been generous with their paint.”

The Tricia Antonini Award is determined via nominations, which can be made by anyone who has a connection to the Bone Marrow Clinic at the Tom Baker Cancer Centre. Its first recipient was Elaine Moses in November 2017. She was honoured for providing accommodation for more than 100 out-of-town patients and families who require long-term stays in Calgary for their treatment. 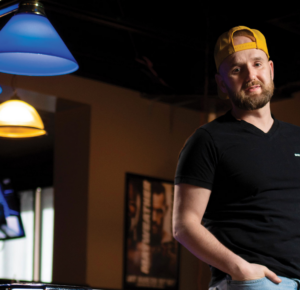