As Tom McKay approaches his 10th year of participation in the Enbridge Ride to Conquer Cancer presented by Evraz, and benefiting the Alberta Cancer Foundation, he can’t help but reflect on the mileage he’s covered so far. Since the inaugural two-day, 200-kilometre event in 2009, McKay has logged more than 1,800 event kilometres, countless training kilometres and has raised close to $50,000 for the Foundation.

Like many of the thousands of riders who participate in the event each year, McKay’s motivation stems from a personal connection to cancer. He lost his mother to breast cancer when he was in his twenties, and he was diagnosed with testicular cancer in 2005 — and declared cancer-free in 2011. Then, in 2016, McKay’s younger brother passed away due to pancreatic cancer, six short months after being diagnosed.

“In my family, cancer is just a huge problem,” says McKay. “Anything I can do to help, that’s what I’m going to do.”

McKay is one of 46 riders who have participated in the Ride to Conquer Cancer every year since it came to Alberta. In his first year, he rode a 1978 Raleigh 12-speed racing bike with the Rail Riders Team from CP Rail. It was his first experience riding amid such a large group and riding for such a long distance — and, thanks to his vintage bike, he did it with no easy gears.

“It was tough,” he says. “The route had a lot of wind on day two, and a lot of really tough hills.”

Still, McKay was in good shape and he crossed the finish line with a sense of accomplishment, raising just over $3,100. After that, he was hooked, returning year after year to ride, raise funds and reunite with volunteers and familiar riders. He also likes to share his ample experience with new riders each year.

“I always look for new riders who look kind of lost at the start area, and I talk to them to reassure them and let them know a bit of what to expect,” he says.

McKay has long since replaced his vintage racing bike with a road bike, mounting a yellow “survivor flag” on its back. Over the last 10 years, he has ridden with teams that include the Rail Riders, Paladin West and, most recently, with Team Cross Cancer Institute — the Cross Cancer Institute is where his brother received treatment.

Now retired after a long career in finance at CP Rail, McKay no longer fits part of his training into his commute. Finding a five-hour window for a training ride, and dedicating hours to fundraising, means time spent away from his family — but he does it because he believes in the cause.

“I’m not a doctor, I’m not going to come up with a cure,” he says. “But by raising money, I feel that I’m helping in a small way.” 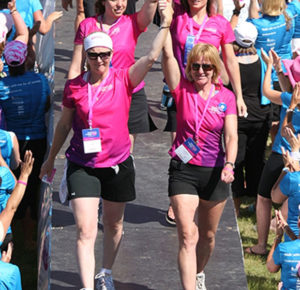