Picture this: Pulsing, coloured lights fill a 60,000-square-foot enclosed arena where more than 250 people sporting neon-tinted spandex follow the lead of an enthusiastic HIIT (High-Intensity Interval Training) instructor. Forty-five minutes of this passes, and then a kickboxing instructor takes the stage to kick the group into action, only to have a yoga practitioner replace her 45 minutes after that.

What you’re envisioning has been nicknamed a “fitness extravaganza,” but the event’s official title is Bust A Move For Breast Health (BAM).

BAM is an approximately six-hour, activity-focused fundraiser that is held each year to raise money for breast cancer research at the Cross Cancer Institute, and to celebrate the breast cancer community. Participants take part in activities that include yoga and ballet barre, and that run back-to-back during the event.

“It’s unbelievable. There’s so much energy — even by the sixth hour when people have basically been working out all day,” says Kate Gallagher, one of the organizers of BAM Edmonton.

Gallagher participated at BAM with her “Buxom Buddies” team when the event first took place in Edmonton in 2011. After just one year of attending, she knew her professional experience as an event manager could help make the initiative even better, so she joined the BAM event team.

“This is a cause that is near and dear to my heart,” says Gallagher, who has seen breast cancer take lives in her community, and whose own mother was recently diagnosed with the illness.

Over the years, BAM events have taken place in various cities across Canada, but Edmonton is the last remaining city in the country that still hosts it — and its next BAM event takes place on June 2 at the University of Alberta Butterdome.

“The reason we’re still alive [as an event] is because of the community support we’ve received,” says Gallagher. “It’s a unique event and the community loves it. We just see overwhelming support year after year.”

To date, BAM Edmonton has raised more than $2 million in support of the Alberta Cancer Foundation, where funds are directed toward research and clinical trials at the Cross Cancer Institute.

But beyond fundraising, the event serves to bring the breast cancer community together, according to Dr. John Mackey, director of clinical trials at the Cross Cancer Institute and an annual BAM Edmonton volunteer.

“I think it’s a reminder that everybody can do things even when they’re difficult,” says Mackey. “We’ve got to look after each other, and this is one way of giving back.”

Mackey also believes that BAM helps to demonstrate the benefits of exercise for cancer patients and survivors, and he has even donned a tutu for the event in years past.

“BAM is special because we have a strong team from the Cross Cancer Institute that comes out every year,” says Mackey. “Not all fundraisers have that level of involvement from cancer care providers.

8%  of attendees are self-identified cancer survivors

The average age of BAM participants is 36 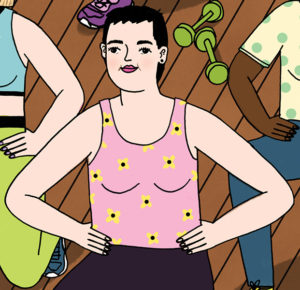