As owners and operators of Lochend Luing Ranch (located in the foothills northwest of Calgary and established in 1974), Dr. Bob Church and his wife, Gina, have long been committed to helping young families in Alberta’s rural communities. One of the many ways this help takes form is through the couple’s annual donation to the Alberta Cancer Foundation’s Patient Financial Assistance Program.

Over the years, Bob and Gina have heard many stories of rural families who are struck by cancer and are struggling to access care or to make ends meet. “We see the Patient Financial Assistance Program as an effective way to help these young families, and to relieve some of the financial pressures so they can concentrate on getting better and not stress over how to pay the bills,” says Gina, whose rural roots reach back to her grandparents’ farm in Balzac., Alta.

Bob himself grew up on a farm in Balzac, too, and he credits his early membership in the 4-H Alberta Club as a major influence in his lifelong philanthropic efforts. “Being a 4-H member in the 1950s set me up for a lifetime goal of helping others,” he says, adding that his enduring commitment to the 4-H pledge — my head to clear thinking, my heart to greater loyalty, my hands to larger service, my health to better living for my club, community and my world — continues to guide him to this day.

Considered a pioneer of molecular genetics and embryo transfer technology in cattle, Bob is now a professor emeritus of the Faculty of Medicine at the University of Calgary and has enjoyed a locally and internationally distinguished career in agriculture, medicine, biotechnology and cancer research. In fact, in addition to serving on boards and committees for a variety of provincial and national initiatives, he played a key role in helping to establish the Alberta Cancer Foundation in the early 1980s. At the time, he was an advisor to the Government of Alberta on health care and was motivated by the desire to ensure all Albertans had timely access to cancer care.

Bob has always believed in the dedication of Albertans when it comes to creating opportunities for the future. “The reason we helped set up the [Alberta Cancer Foundation] was that we knew Albertans were very generous people, and we also knew that we could not always count on the powers-that-be in the government to be able to pay all the costs [related to cancer].”

Like so many others, Bob and Gina have their own personal connections to cancer — each has lost a parent to the disease. For Gina, giving to the Alberta Cancer Foundation helps to honour her mother’s memory.

“My mother had signed her donor card early in life, but couldn’t be a donor due to her cancer,” Gina says. “This is a way for me to honour her wish to help others.”

The Churches’ most recent donation to the Patient Financial Assistance Program was also made in recognition of Myka Osinchuk, CEO of the Alberta Cancer Foundation from 2011–2017, who happens to have rural roots as well. “We strongly admire the work Myka has done, and her sincerity, compassion and commitment to the Foundation,” says Gina.

“[Myka] led the charge in getting record-setting contributions from across the province,” adds Bob, who feels that her efforts, and the Patient Financial Assistance Program, both “make a significant difference in Albertans’ lives.”

Learn more about how you can support the Alberta Cancer Foundation Patient Financial Assistance Program at albertacancer.ca. 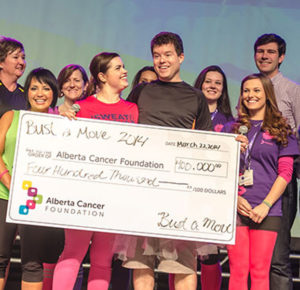