Over the years, Calgary-based airline pilot and endurance adventurer Laval St. Germain has spent a great deal of time away from home. When he isn’t flying airplanes for a living, he’s often off running ultra-marathons, climbing some of the world’s tallest mountains or cycling great distances in the Arctic.

But on one evening in January 2016, St. Germain found himself in town, visiting a good friend at the Foothills Hospital. For more than 15 years, Korey Hazelwood had worked as an airline captain alongside St. Germain, but he’d spent the last year dealing with a persistent cough, a number of misdiagnoses and a lot of questions. He would soon learn he had lung cancer.

As St. Germain sat with his friend that night, an idea began to take form. For months, he had been planning his latest extreme
adventure: rowing a tiny boat across the Atlantic Ocean. In support of Hazelwood, he would turn his personal adventure into the Confront Cancer Ocean Row, a fundraising effort in support of the Alberta Cancer Foundation.

“Imagine that I led you by the hand to a dock on a cold morning and I put you on a boat,” says St. Germain. “You’d ask, ‘What are you doing?’ and I’d shove you off and say, ‘You’re gonna row this thing, here are your oars — head east.’ I thought to myself that a patient going into a doctor’s office and getting a cancer diagnosis would feel a lot like that.”

In June 2016, St. Germain boarded his specially designed 20-foot rowboat at a Halifax dock and set off on the more than 5,000-kilometre journey to France. Armed with ample supplies and a hot Tim Hortons’ coffee, he still wasn’t sure he was ready.

“You have this bit a dread knowing that you’re about to do something that’s fairly dangerous,” he says. “But I was able to temper that, telling myself that I’m going to row the ocean, I’m not going for chemo. This could be a lot worse.”

In the following days, St. Germain confronted all kinds of highs and lows on the sea, from being tossed violently on the waves during seemingly endless storms, to watching a fleet of dolphins dance around his tiny vessel. He stayed in contact with friends and family, including Hazelwood, through a satellite phone, but largely went through the experience alone.

After all the solo triumphs and struggles at sea, he rowed into the dock in Brest, France, a record-breaking 53 days from when he’d first set off. He’d planned for the journey to take 100 days, but a generous current had helped to narrow the time frame. Met by his wife, and facing days of shaky legs, his epic journey was complete — and he raised more than $60,000 for cancer research.

St. Germain says he’d hoped to raise more, but he intends to continue pushing his body and spirit to support important causes. He’s currently planning on teaming up with the Alberta Cancer Foundation for another fundraising expedition in early 2019.

It’s been two years since St. Germain sat in that hospital room with Hazelwood, who is currently responding positively to treatment. But St. Germain knows there isn’t always a happy ending. He has recently lost another fellow pilot, as well as his father-in-law, to the disease.

“I just want to somehow help,” he says. “Having my friends and family go through cancer was an inspiration for me, and I hope this inspires people to challenge themselves, too.

5,000 Number of kilometres travelled.
53 Days it took to complete the trek from Halifax to Brest, France.
60,000 Dollars raised for the Alberta Cancer Foundation.
20 X 5 The length and width (in feet) of St. Germain’s custom-built boat.
26 Kilometres per hour was the fastest speed he reached during his row.
9 Number of months it took to train and prepare for the journey. 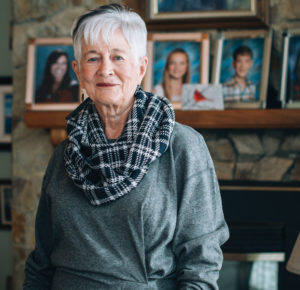 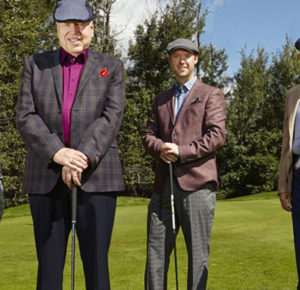