In 1991, when she was just out of university, Joan Hauber landed a temporary job with the Cross Cancer Institute in Edmonton. As her term was coming to a close, she joined the Institute’s fledgling mobile mammography screening program, which originally consisted of sending a van full of screening equipment across north central Alberta and setting up in community centres or other buildings.

“At that time, I didn’t even know what a mammogram was,” she says. Now, 26 years after taking that job, Hauber is the manager of operations for the Screen Test mobile screening program — and the difference that program makes to families across the province gives clues as to why she would stay with it for so long.

Mammograms, which look for small changes or abnormalities in the breast, are crucial for early detection of breast cancer, which increases survival rates. But, for Alberta-based women who don’t live in communities with mammography facilities, or for women who have disabilities or can’t drive, it can be difficult to get screened regularly.

“If women can’t come to us, we’re going to take the mammograms to them,” Hauber says.

And she means it.

Thanks to the generosity of Alberta Cancer Foundation donors, two mobile mammography units were purchased so that Hauber and her team can travel to around 120 communities in well-equipped trailers that serve as mobile clinics, working from 7:00 a.m. to 7:30 p.m. each day to schedule and screen as many women as possible. “Some women are thrilled because it saves them from driving,” Hauber says. “But for others, it truly enables them to do something they couldn’t do otherwise.”

Mammography by the Numbers
Every year, the mobile units screen upwards of 15,000 women.
Mammograms can detect breast cancers up to 2 years sooner than physical exams can.
Between 2015 and 2016, 63% of  Alberta women from ages 50 to 74 had a screening mammogram.
It is recommended that women between ages 50 and 70 should have a mammogram every two years.

Dr. Jana Rieger has similar aims through her work. Rieger is a professor in the Faculty of Rehabilitation Medicine at the University of Alberta and the director of research at the Institute for Reconstructive Sciences in Medicine (iRSM), a joint initiative of the University of Alberta, Covenant Health and Alberta Health Services. She studies the effects of head and neck cancer, and she says the overwhelming majority of patients with these forms of cancer have some kind of problem swallowing after they undergo treatment. That might seem like a mere inconvenience to outsiders, but it can cause immense disruption in patients’ lives.

When Rieger began her research in 1999, she says “people were really focused on a cure, but no one was really talking about what the patients were left to live with after they got treatment.” She adds, “One of the most common things we hear from patients is that [problems with swallowing] stop them from socializing the way they did before. They’ve avoided social outings because it’s just too awkward for them.” The good news is that there’s intensive swallowing therapy, and it works. About 80 per cent of people can eat better after the therapy, and 30 per cent of patients who had a tube in their stomach could, post-therapy, have it removed.

“If women can’t come to us, we’re going to take the mammograms to them.” — Joan Hauber, manager of operations for the Screen Test mobile screening program

The bad news, however, is that the therapy requires the patient to go in for treatment every day, which about 90 per cent of patients wouldn’t do because of the time-commitment involved. “Even for patients in Edmonton, it’s almost a half-day event,” Rieger says. “People just weren’t doing it.”

Enter something called Mobili-T. The result of a $1.9-million investment from the Alberta Cancer Foundation, Mobili-T is a small, square interface device that replaces the large clinical equipment, allowing patients to do the therapy at home. Placed on the chin, and measuring just two inches by two inches in size, it records muscle activity and feeds the information back to an app that can be downloaded onto the patient’s phone. A clinician can then use that data to put the patient into specific therapy exercises and track how they’re progressing each day, week and month, to help patients hit targets.

Mobili-T is currently in its clinical trial phase, and Rieger hopes the final product will wind up all across the world. “Our hope is to help more people enjoy more foods, swallow more safely, and get back to living a regular, normal life,” Rieger says. “Now they can go to a friend’s place without worrying about what kind of food will be on the table.”

To make a difference in the lives of Albertans facing cancer, click here. 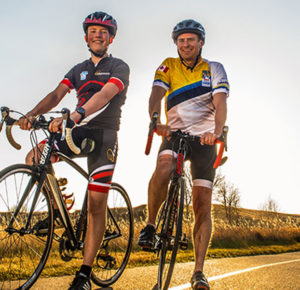 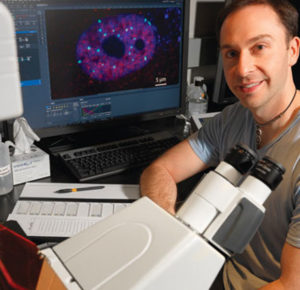