By his own admission, he’s more of a baseball guy. But, every third February for the last 15 years, Dr. Brent Saik has laced up his skates for a game of hockey on an NHL-size arena he built in his yard in Sherwood Park — all for cancer research.

There’s a subtle connection between hockey and cancer: you might endure one hit after another, but you persevere, and you never, ever, hang up your blades until it’s really over.

In Saik’s case, that’ll be at least 10 days, 10 hours, three minutes and 22 seconds. That’s exactly two seconds longer than the current Guinness World Records’ “World’s Longest Hockey Game,” and it’s the target Saik and 39 other players will need to hit in order to reclaim their ownership of the record this February, which will be Saik’s sixth time hosting the event.

Saik started the game in 2003 after his father died from cancer. A few months after that game, he hosted the event again after his wife, Susan, passed away from cancer, too. Each player in the World’s Longest Hockey Game, in fact, has some kind of tie to cancer. “The ultimate goal is to make sure the treatments and equipment we’ve supported are helping to cure people’s cancers, and, of course, helping to cure all cancer,” Saik says. In other words, he’s in it to win the long game.

Saik hopes to raise $2 million this year, which would bring the total amount he’s helped to raise for the Alberta Cancer Foundation over the years to about $6 million. This year’s fundraising will benefit PROFYLE, an acronym for Precision Oncology for Young People. Led by the Terry Fox Research Institute, PROFYLE is a national program that provides adolescents and young adults with individualized treatment. The process for determining and delivering this treatment varies, but, essentially, PROFYLE collects samples, sequences them genomically, and then provides personalized — or precision — treatment. “You look at the cancer at a molecular level and see if there might be some other answer,” says Patrick Sullivan, a B.C.-based lawyer and advocate of the program.

For Sullivan, a cancer fundraising legend himself, PROFYLE is personal. His son, Finn, was 20 months old when he was diagnosed with rhabdomyosarcoma, a rare childhood cancer that took his life in October 2008.

“When we were told Finn was incurable in 2008, [we didn’t have the technology] to do any of this,” Sullivan says about PROFYLE, which he’s been instrumental in helping to fund and develop. “It would have given us a chance at hope and maybe we would have [had] more time.”

Saik is eager to support the work of PROFYLE and, though he acknowledges the upcoming World’s Longest Hockey Game will be painful, he knows there’s a purpose to it. “You have this very small feeling of what it’s like to suffer, and you’re all going through it,” says Saik, who also points out the game isn’t really about beating your competitor. When it comes to cancer, we’re all on the same team.

The WLHG takes place February 9 to 18, 2018. To donate, visit albertacancer.ca/wlhg

Ask the Expert: The Benefits of Core Exercises and Practising Yoga During Treatment 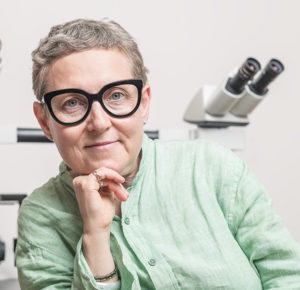