Among the 1,500 blue-and-yellow-clad riders who took part in the 2017 Enbridge Ride to Conquer Cancer, Presented by EVRAZ, there were 10 cyclists who couldn’t be missed. Sporting white jerseys covered in black polka dots, this small group of standouts were being commended for their impressive fundraising efforts.

Every year, the Polka Dot Jerseys are awarded to the first 10 Ride participants who reach the $15,000 fundraising mark; the jerseys are a sartorial symbol of determination and perseverance.

Ride participant Mike Peters says he didn’t initially set out to get the special jersey, but he got excited once he realized he might be among the first to reach the fundraising threshold. Peters, who was diagnosed with kidney cancer in 2015, started wondering who else might be wearing the Polka Dot Jerseys alongside him on the two-day, 200-kilometre ride that sets out from Calgary every August.

“I couldn’t help but wonder who they were and what their stories were,” says Peters. “You’re kind of surrounded by other people with a cancer story; it’s comforting.” Peters organized a photo shoot in hopes of creating some camaraderie among the group — and of having a bit of a keepsake.

“Everybody agreed to do it, and we got together the night before the Ride,” says Peters. “It was neat to see who they were, and then it was even more inspirational to get them together.”

The Ride raised $6.7 million for the Alberta Cancer Foundation in 2017 and celebrates its 10th anniversary in 2018. 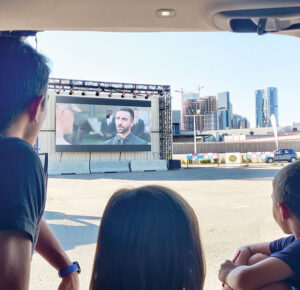