It’s a Tuesday afternoon in July and the Medical Physics Design Lab at the Tom Baker Cancer Centre is buzzing. “Fortunate Son” by Creedence Clearwater Revival plays through crackly speakers – just audible above an oscillating hum of clanking and whirring.

“Without these guys, we couldn’t dream of doing the kind of testing that we’re doing,” says Jose Eduardo Villarreal-Barajas.

“Let me grab a chunk of clay and then I can chat,” says Christian Bagg, a mechanical designer and the silver-hair-streaked veteran of this cauldron of invention. Matt Skarsgard, a 19-year-old Queen’s University student clad in a white lab coat and safety glasses, darts in and out of the room. He’s experimenting with different coatings to get a material to more closely resemble a tumour when viewed with ultrasound.

Will Gill, a recent mechanical engineering graduate from the University of Calgary, strolls by carrying a face carved from blue Styrofoam. Adam Yarschenko, a design engineer and the lab’s other permanent staff member, plugs in a small robot that he built to mimic the movement of lungs during respiration.

“No one comes in and says, ‘We need a bicycle,’ ” says Bagg, summing up the challenge and ex-hilaration that comes when collaborating with medical physicists on their quest to quell cancer with radiation. Bagg is at the lab’s main work bench, the focal point of the 1,500-square-foot room that includes welding equipment, 3D printers, saws and a variety of lathes, drill presses and mills, all of which are huge, heavy machines that can sculpt, carve and manipulate metal.

The room is crowded with top-of-the-food-chain tools – the kinds of tools that make other tools. Bagg, however, is using his hands to sculpt the brown clay into the shape of a breast. The mould needs a specific geometry as outlined by Jose Eduardo Villarreal-Barajas, one of the Tom Baker’s 12 medical physicists.

The Design Lab is in the basement of the Tom Baker Cancer Centre along with the rest of the physics department. Medical physicists are generally basement dwellers because one of their primary tools, the linear accelerator, requires several feet of concrete insulation in the surrounding floor, walls and ceiling to protect against errant radiation. The rooms that house these devices – floor-to-ceiling contraptions that accelerate electrons and then crash them into a heavy metal such as tungsten to produce precisely targeted, DNA-shredding photon beams – are called vaults. The Tom Baker has 10 such bunkers, although only eight are currently in operation.

About half of cancer patients get treated with some form of radiation therapy and Wendy Smith, director of the Tom Baker’s department of medical physics, says her team helps treat about 3,600 patients a year. This brainy behind-the-scenes crew reviews every patient plan that includes radiation. They know the linear accelerators backwards and forwards and continuously test their accuracy. When they’re not helping to treat patients, medical physicists research new techniques and troubleshoot how to safely apply radiation in atypical cases. Treating cancer with something as powerful and dangerous as photon beams demands an unusual alliance between atomic physics and practical know-how.

“There’s a certain amount of fulfillment from understanding how the universe works,” says Smith. “But at the end of the day, what do you really accomplish?” The chance to apply high-level science to real-world problems is what motivated Smith to make the switch from theoretical astrophysics to medical biophysics. This hands-on dimension is also what makes the work of people like Bagg and his team indispensable for comprehensive cancer centres – at least in Canada.

“Not having this workshop would be terrible for us,” says Villarreal-Barajas. The senior medical physicist worked at the University of California San Francisco, which had no counterpart to the Design Lab, before coming to Calgary and the Tom Baker 10 years ago. Villarreal-Barajas explains that if he wanted to research a new radiation technique, he would be limited to online videos, attending conferences or, if he was lucky, one or two site visits to watch the procedure done at another hospital. Observation, says Villarreal-Barajas, is no substitute for first-hand experience.

The clay mould Bagg was shaping on his work bench will form part of a model of a woman’s torso and breast. Medical physicists use these models, or phantoms, to research new treatment methods. Sometimes that can mean a completely novel approach for radiating cancer cells, but phantoms are also handy for training oncologists and radiation therapists (medical physicists do not actually deliver treatments) on techniques already in use at other centres. Phantoms are put through the entire rigmarole from CT scans to treatment plans, quality control checks and linear accelerator treatments. “We practise and practise until we master the process,” says Villarreal-Barajas, estimating that Tom Baker physicists introduce two or three new techniques every year. “Without these guys, we couldn’t dream of doing the kind of testing that we’re doing,” Villarreal-Barajas says of Bagg and his team.

Tyler Myer, a Tom Baker medical physicist who grew up in Castor, Alberta, is also advancing his research with help from the Design Lab. Brachytherapy is another method of treating cancerous cells. Radioactive seeds are implanted with a needle and slowly release radiation to the surrounding tissue. The first-ever seed implant for breast cancer was done in 2004 at the Sunnybrook Health Sciences Centre in Toronto. Twelve years later it’s still a rare procedure performed by a handful of surgeons worldwide.

“Not everyone is an F1 race car driver,” says Myer, explaining how the current technique demands extraordinary dexterity. Results of breast brachytherapy vary widely from centre to centre because it’s so physician dependent. Myer is working to standardize the procedure and reduce that element of surgical wizardry. “We want to make it safer and easier for more clinics to be able to offer this treatment,” says Myer, who consulted the Design Lab on ways to improve the technique.

Bagg ended up creating the Stepper, a sleek L-shaped device that attaches to the patient’s bedside and has a series of knobs that allow the surgeon to precisely adjust the angle and placement of the needle. “He just went and built it,” says Myer, who began working at the Tom Baker a decade ago as a grad student. Myer remembers reviewing his CV at one point and realizing that every paper he has been involved in publishing has relied on one device or another that was developed at the Design Lab.

“It’s better to do a functional decomposition of what they need rather than ask what they want,” says Yarschenko. It’s inevitably a trial-and-error process as the physicists and Design Lab staff whittle their way from abstract concepts to designs to tangible inventions. The small robot, called a sinusoidal wave form phantom, methodically rises and falls on the wooden table in front of Yarschenko. Its minutely calibrated movements are used to measure the amount of radiation absorbed at various heights. When we breathe, our chest expands away from our heart. The robot phantom helps plan linear accelerator treatments where radiation is released at the exact moment when it will do the least amount of damage to the heart.

Yarschenko joined Bagg at the outset of 2016. He’s the first engineer to work at the lab, which had been the sole domain of machinists since its inception in 1963, when the Calgary Cancer Centre was located at the Holy Cross Hospital. Yarschenko is part of a new trajectory for the lab as it expands its capacity to support medical physicists as they push the frontiers of radiation therapy.

“Pull the logo up,” says Bagg. Gill turns to a laptop on a desk behind the work bench. A symbol of an atom pops on screen. Instead of a nucleus, the three elliptical orbits, white arcs on a blue circular background, swoop around two gears with different sized metal teeth. It’s a succinct depiction of how medical scientists and metalworkers collaborate to provide individualized care and pioneer new treatments at the Tom Baker Cancer Centre. 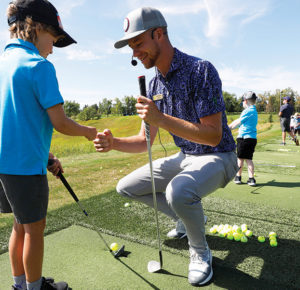