Across the country, fitness enthusiasts are transforming basic ballet moves into a heart-pumping, full-body workout.

“We really focus on working out everything and making sure we hit every muscle group,” says Megan Clark.

Barre classes – a fusion of Pilates, yoga and ballet – are part of a growing fitness trend that promises to give your body strength and definition as well as improve posture, endurance and flexibility.

For Megan Clark and Elissa Jamieson, it was a no-brainer to open their studio, Barre Body Studio, in Edmonton three years ago. The duo was ahead of the curve when it came to bringing the workout style to Alberta’s capital city.

Clark tried her first barre class while on vacation in Portland and was immediately hooked by the unique style. Soon afterwards, she began teaching barre at a local dance studio. “I thought it sounded interesting so I tried it and I absolutely loved it,” she says.

Eventually, the wheels were put in motion and the first Barre Body Studio was opened in the city’s northwest. It has since expanded to three locations. “It’s kind of taken off,” says Clark, noting that boutique barre studios are popping up across the city. “People love it, and it’s growing.”

A typical barre class consists of a combination of using the barre for standard ballet dance moves – such as pliés, pelvic tucks and fourth position – along with mat exercises and free-weight circuits. The Barre Body Studio’s workout method is a fusion of low-impact movements done in a high-energy environment that target common problem areas and focus on strength and flexibility, Clark explains. “The moves are really small and really controlled.”

Barre is a great way to work out because it’s low impact and can actually help people relieve their back and joint pain, says Clark. “It’s easy on the joints, but it still gets deep into the muscles.”

Barre Body Studio has a variety of different classes for barre enthusiasts to try. On top of the standard one-hour class, there is a Barre Body Blast class, which, in addition to the standard barre movements, includes two cardio components. Also offered is a Barre + Core + Stretch class, which combines typical barre movements with stretching and core-strengthening exercises.

No matter what class, Clark says Barre is a complete full-body workout. “We really focus on working out everything and making sure we hit every muscle group,” says Clark. “We’re also doing it in a very safe and functional way.”

Clark says barre is suitable for everybody, no matter their fitness level. “The movements are so small they’re really easy to follow and really easy to modify,” she says, noting each class offers modifications both for beginners and those who may be more advanced. “Listen to your body. If you need to take a break, take a break.”

But don’t get the idea that the workout won’t challenge you. “There will be a burning in your body that you’ve never felt before,” says Clark. “People say they’ve seen changes in their body in just three classes,” she says. “Barre is going to help you live your life better.”

At one Calgary studio, they are putting a new spin on barre classes.

Barre Belle, a boutique fitness studio located in the city’s southwest, is transforming the barre craze into an ultra high-energy experience. Owners Jill Belland and Kristi Stuart opened their studio in February of 2016 and thought regular barre classes needed an overhaul. “We thought there was a missing component and that we could take the classes up a bit,” says Belland.

At their studio, workouts are done to lively, loud music. For instance, the Cardio Dance class is described as a “dance party without the club but with the sweat.”

“Barre Belle has kind of changed the landscape of barre, and Barre X is phenomenal,” says Belland, referring to a class that provides close to an hour of high-intensity cardio. “You use the music to motivate you; it makes you seem as if you’re working as part of a team.”

The pulse-pounding classes still incorporate all aspects of barre, with clients using the barre, mats and light hand weights. “You’ll be out of breath; we use lots of props,” says Belland. “But it’s fun. Sometimes it’s so fun, it doesn’t even feel like you’re working out.”

The classes incorporate high-repetition exercises to help fatigue and stretch out the muscles, with some classes including a nine-minute arm circuit using light weights. “We tone all the muscles women want,” says Belland, who notes that barre classes are no walk in the park.

“You get a full-body workout and you will be challenged,” says Belland. “It’s some of the most challenging work you can do. You will leave sweaty.”
Classes have always been well-received by clients, and some have been coming to the studio since it first opened its doors. “We’ve watched our clients’ bodies change before our eyes,” she says.

A trained dancer-turned-runner, Belland instantly found her passion with barre. The workout style has allowed her to combine her two passions and help others achieve their fitness goals.

She initially tried it on a whim and found that the unique workout style brought her back to her days as a ballet, tap and jazz dancer. “I loved barre; it totally changed my body,” she says.

While all of the instructors at Barre Belle have strong dance backgrounds, no dance experience is necessary for those wanting to try barre. “I want everyone to try it,” she says. “People get intimidated because they think you have to be a dancer, but it’s really just getting through the front door for the first time.”

That’s the case for Elaina Smith, who has no dancing background and tried barre out of curiosity. Now she’s hooked and she has been going to classes steadily for the past year.

“Barre seemed different than all the other classes I normally do, it’s more of a workout,” says Smith. The first class, although fun, had her muscles screaming. “It’s really tough,” she says, noting the dancer poses put emphasis on the legs.

Smith, an athletic swimmer, says she’s most definitely noticed a change in her body thanks to pushing herself with barre. “The classes have gotten easier as I’ve gotten stronger,” she says. 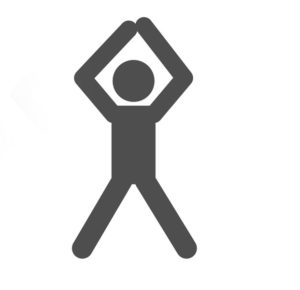