Head and neck cancers, with their low survival rates and drastic physical consequences, are one of the most traumatic cancers a patient can go through. Often, treatment requires the removal of parts of the patient’s skull or face, making it difficult to do things like eat, drink and speak as they had before. Afterwards, they undergo intensive therapy and rehabilitation: clinicians may ask patients to come in as often as three times a week, and therapy requires patients to exert a lot of effort in order to see an improvement.

“It’s the patients and their stories that motivate me,” says Gabi Constantinescu.

Edmonton’s Institute for Reconstructive Sciences in Medicine (iRSM), a clinic and research body, has been working to ease the effects of cancer treatment by advancing the science behind reconstruction and rehabilitation. Right now, the Alberta Cancer Foundation is fundraising $2 million for a trio of researchers that are working to develop a swallowing therapy device that will allow patients to complete therapy at home.

Gabi Constantinescu is a speech pathologist and PhD candidate, on education leave from her clinical position at iRSM. She noticed seven years ago that patients were having difficulty attending their swallowing therapy appointments. They either couldn’t take the time off work, they had conflicting appointments or they couldn’t drive to the clinic in Alberta’s sometimes less-than-ideal driving conditions. The clinicians also couldn’t always fit them in three times a week.

Since then, Constantinescu has been researching what patients want and need from a mobile swallowing device. Along with Daniel Aalto, who is using mathematics to detect when a patient swallows, and Li Liu, who is helping to develop an adhesive that places the device under the chin, her work at iRSM is supervised by Dr. Jana Rieger. Through one-on-one interviews with patients, Constantinescu has worked to determine the facilitators and barriers to unsupervised home therapy.

“[Gabi] was the clinician who originally came to me and said, ‘Hey, wouldn’t it be neat if we could develop a mobile device?’ ” says Rieger. “So, she deserves a lot of credit.” With a background in biochemistry and genetics, Constantinescu began her work in speech therapy because she wanted to see the immediate effects of her work on patients. “It’s the patients and their stories that motivate me,” she says.

Her work has introduced patients to design concepts and possible options for what is known as “biofeedback swallowing therapy.” For this therapy, clinicians use surface electromyography (sEMG), a type of visual feedback that involves attaching sensors to the patient’s skin, which detect muscle contractions while the patient is doing exercises. It allows the patients to assess their efforts and determine next steps.

The team’s work is ultimately centred on improving patient quality of life. For Liu, a graduate student in chemical and materials engineering at the University of Alberta, this means improving a key part of treatment: the mobile swallowing device that patients use has an adhesive pad that often irritates the skin and leaves a residue. Since patients must wear the device several times a day, Liu is working to pioneer a reusable adhesive that’s comfortable.

In developing an improved adhesive, Liu has been researching which silicone gel needs to be used and how thick it should be. Liu was introduced to Rieger when her supervisor learned that Rieger wanted to develop a new adhesive. “I find it interesting to develop something new and [to] help the patient,” says Liu of what motivates her in her work.

After completing his PhD in mathematics, Aalto set out to find a way to apply his skills – now, he’s developing an algorithm for the mobile swallowing device that will detect when a patient swallows. His work will determine how to provide immediate feedback to the patient after they swallow. He’s also helping the lab turn their assessment into 3D images by tracking jaw movements.

“What motivates me is seeing these powerful mathematical tools change how things happen,” he says. 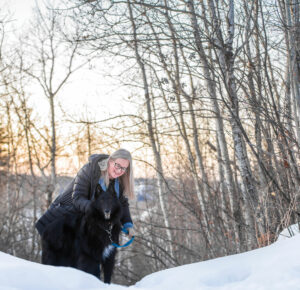