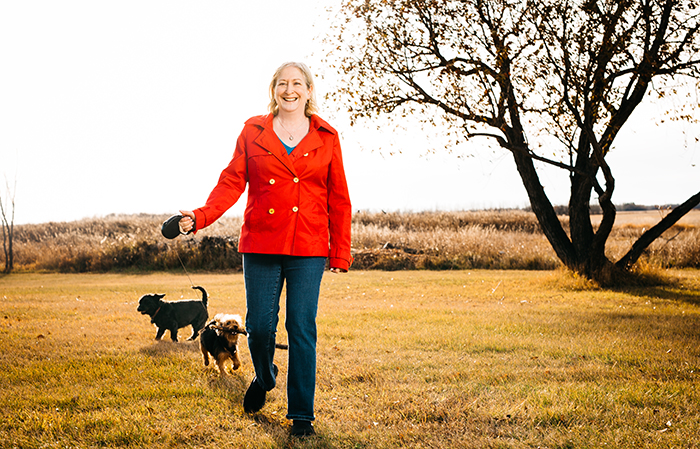 In her role as a social worker, Vivian Collacutt calls all of Alberta her office. Taking a break between business trips to Toronto and Newfoundland, she shared what her days look like as the director of supportive care and patient experience with CancerControl at Alberta Health Services. It’s a complex, busy role, and the scope of her work is broad – a typical day could involve everything from helping her social work staff support the needs of cancer patients in rural areas, to participating in collaborative initiatives at the national level.

No matter where she is, though, Collacutt has an awe-inspiring capacity to care. That capacity, combined with an unimaginable work ethic, is the essential factor shaping both her professional and personal life.

“I think Viv is just so amazing. To look after six kids and put herself back through university – that’s just not what most people do,” says Scott Collacutt.

From 1989 to 1993, for example, Collacutt and her husband Scott were living in Halifax, where they fostered 35 children, not counting those they took in for emergency respite situations. “Most of our foster children were under the age of five, and most of them were boys,” she says. “We had some kids for many months, some off and on for years, and some for only a day or two.”

During this time, they adopted their first two sons. From 1993 to 1995, the family had several more changes, as they moved to Calgary and adopted four more children. “All four of our boys have the same biological mother, and our two girls are full biological sisters,” Collacutt says. With six children, and their four boys having a variety of special needs including ADHD, FASD and brain injury, the Collacutts did not foster children after moving to Alberta.

While raising their family, Collacutt decided to pursue her passion and make a career change: “In the mid-’90s, I decided to become a social worker,” she explains. “My intention was to work in adoptions, but I took an awesome health-care course and changed focus to a medical career.” Scott supported his wife’s decision, as he felt it was “a genuine fit for her,” but he still marvels at her ability to get everything done. “I was in the military at the time, and I was away on exercise and overseas a lot,” he says. “I think Viv is just so amazing. To look after six kids and put herself back through university – that’s just not what most people do.”

Upon graduation in 1999, Collacutt began a full-time job as a social worker at Sturgeon Hospital in St. Albert. She was also a student again, earning her master of social work from Dalhousie University. Plus, she ran two marathons and over 15 half marathons during that time. “When I look back on it, I’m not sure how I did all that,” Collacutt says. “I think the running was a huge part of keeping my stress in check.”

Bernie Mallon, a longtime friend and master of social work schoolmate, observes other traits that help her friend succeed: “Vivian is really smart and organized, and she is able to make really good use of her time,” she says. “I’ve always admired how well she’s able to see the big picture. She can pull all of the pieces together nicely and, in her current role where her region is so broad, she has the ability to develop relationships and facilitate networking.” 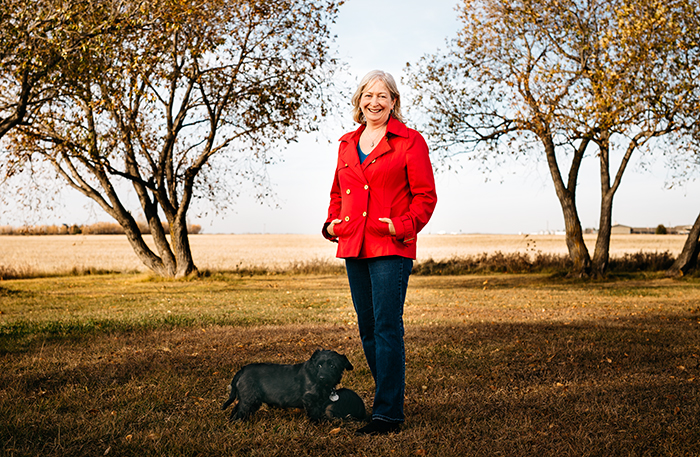 Collacutt says her collaborative approach and background in social work applies to all facets of her job. “A lot my work is influential, so relationship building is at the foundation of everything that I do,” she says. “When we’re looking at helping patients from across the province, it’s important to bring all of the groups to the table so that we can understand what’s out there and how we can best work together to help people.”

Collacutt’s job is to assist patients in community oncology, with access to services and patient care being of critical importance. While she doesn’t work directly with patients, she supervises and provides leadership to those who do. This includes managing a team of six social workers as they work with people at the four regional centres and 11 cancer care centres province-wide.

She says the social workers have become a true team, which is beneficial for patient care and for their professional connections. “It’s been so rewarding to see them grow and develop as a team,” she says. “They have to work with some devastating situations, so to be able to bring the issues to the front and support each other is essential.”

This supportive approach is something Collacutt models to staff. “She’s a very compassionate and caring supervisor, for us as individuals and as a group,” says Tricia Hutchison, community oncology social worker with AHS. “Vivian emphasizes that we all have a role to play – we each have skills and we need to respect the skills of others to build a really strong team.”

No matter where she is, Vivian Collacutt has an awe-inspiring capacity to care. That capacity, combined with an unimaginable work ethic – are the essential factors shaping both her professional and personal life.

A commitment to team building is evident in another aspect of Collacutt’s job, where she is responsible for the community oncology rehabilitation program. “We’re just starting to grow this program, and we have one physical therapist in Lethbridge and a physical therapist and an occupational therapist in Red Deer,” she says. “Cancer treatments can cause physical impairments, and it’s so important for people to have access to appropriate therapies and supports in the regional areas.”

Regional access to support is a pivotal point when it comes to the First Nations-Inuit-Métis (FNIM) work that’s another area of responsibility for Collacutt. “The focus in this area involves increasing access to cancer services for FNIM patients, improving co-ordination of services across the cancer continuum and supporting the development and dissemination of culturally competent resources and care,” Collacutt says. To help make this happen, Collacutt participates in nationally funded collaborative initiatives with AHS partners and with FNIM leaders, communities and organizations.

When she considers the diversity in her current role, Collacutt is thankful to “have a manager who supports me and encourages me to pursue areas that are my strengths,” she says. “I’ve been able to be part of many different councils, projects and initiatives, including the CancerControl Alberta Supportive Care Council and the Communities of Practice project, where I can represent community oncology and connect with people provincially and nationally.”

In the end, Collacutt is all about relationships and connections. “Scott and I have always had a great partnership, with our children and now grandchildren being an incredible part of our lives,” she says. “At work, I’m so fortunate to have a fantastic team, and I’ve never stopped learning and growing because of the partnerships. I’m so grateful to have the opportunity to do this rewarding work.”

“I really admire Vivian’s ability to advocate for patients and families, and the collaborative health-care team approach, in all of her day-to-day responsibilities,” Hutchison says.

But Collacutt’s husband Scott thinks that it’s all her hard work that has led to this success: “She’s really put her heart into her work, and she’s helped to effect changes in many ways, such as remote areas receiving more assistance,” he says. “Vivian is often the glue that keeps everything together and makes it possible.” 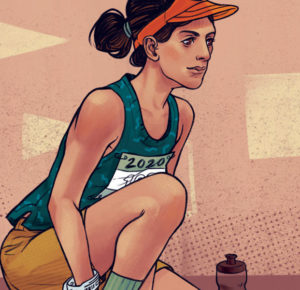 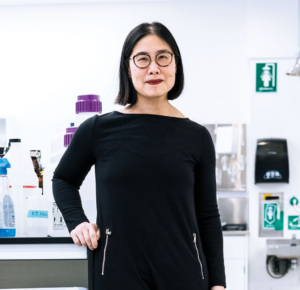