Sitting at her desk at the Cross Cancer Institute, Lori Kirkaldy defines the Cree word for cancer: munchoosuk. “It literally means, ‘a bug that eats you from the inside out,’ ” she says. “In other dialects, it translates to ‘a spider under the leaves.’ ”

“It was as though everything I’d gone through and experienced in my life led me to this job.”

Kirkaldy’s job, as aboriginal cancer navigator at the Cross, sees her facing down the cultural and medical differences that arise when some aboriginal people are diagnosed with cancer. “It’s highly stigmatized,” she says of the disease. “Quite often, a person will know something is wrong with him or her, but not want to go for screening and hear that they have cancer.”

The rate of cancer incidence amongst aboriginal people has historically been lower than non-aboriginal people in Canada. Still, studies have shown a smaller percentage of aboriginal women receive mammograms and PAP smears every three years compared to non-aboriginal women in Canada. And recent research shows that due to social poverty and lack of access to education and health-care – and subsequently, higher rates of drinking, smoking and poor nutritional intake – the future cancer burden is expected to grow amongst aboriginal populations, particularly on First Nations reserves. The disproportionate burden of poverty and disease – the “highs and lows” as Kirkaldy calls them – is what first motivated her to become an aboriginal cancer patient navigator.

“When I was in nursing school at the University of Alberta, we did a project on the high suicide rates amongst aboriginal youth. That’s when I first realized how poor our health is as a population, compared with non-aboriginals. Our life expectancy is lower, our mortality rate is higher. We have a higher incidence of heart disease, diabetes and hypertension. We have a lower income,” says Kirkaldy.

Kirkaldy was born and raised in Edmonton. Her mother was originally from Tsiigehtchic, a Gwich’in First Nations community located along the confluence of the Mackenzie River and the Arctic Red River in the Inuvik region of the Northwest Territories. Kirkaldy’s mother was a survivor of the residential schools system, a colonial project from 1870 to 1990 that forced over 150,000 indigenous children in Canada to leave behind their families and cultural ways to attend government-run boarding schools. In June 2015, the Truth and Reconciliation Committee urged the Canadian government to “acknowledge that the current state of aboriginal health in Canada is a direct result of previous Canadian government policies” and to implement the health rights of aboriginal people.

“Not everyone understands the history of aboriginal people and how the past has affected our health today,” says Kirkaldy. For 10 years, Kirkaldy worked as an oncology nurse at the Cross. During that time, she remembered saying to her husband: “I want to work with our people somehow. But I’m an oncology nurse – what could I do to help?” Shortly after, as though her prayers were answered, Kirkaldy stumbled across a job posting for an aboriginal cancer patient navigator position. “It was as though everything I’d gone through and experienced in my life led me to this job,” she says. She applied and was hired in July 2014.

The aboriginal navigator position, funded by Alberta Health Services’ Aboriginal Health Program, is a pioneering counselling service that offers special counselling support to aboriginal cancer patients through diagnosis, treatment and recovery at the Cross. “When I took this position, I thought I’d sit in my office and counsel my patients. But it’s so much bigger than that,” admits Kirkaldy. On any given day, she finds herself playing multiple roles: she explains medical procedures to patients, acts as a liaison between patients and oncologists, and helps them access housing and transportation resources.

“The aboriginal population typically shows up in the later stages of cancer, and our people tend not to finish their treatments. It’s for a variety of reasons – lack of resources, miscommunication or because they’re overwhelmed by the system. Through consultation, people said they needed someone who knew our life, our culture – they needed a friendly face to help them with the system. They asked for someone they could trust,” says Kirkaldy.

Trust is key to Kirkaldy’s work. When she meets a patient for the first time, she takes time to get to know them. “How are you feeling? How was your trip?” Kirkaldy asks them. Many of her patients are forced to travel from their homes on reserves and settlements for treatment. Patients living in northern Alberta face journeys of five to 10 hours on the road.

Many patients struggle to complete their treatment because of the long distance between their communities and the hospital. Patients receive treatment Monday through Friday at the Cross and are sent home on the weekends. For a patient living seven hours away, that schedule is a major barrier. She recalls a misunderstanding that occurred between a patient and oncologist: late on a Friday afternoon, the doctor wanted to put in a pick-line to help the patient, but the patient refused treatment and became “unco-operative.” Kirkaldy was called in to help mitigate the misunderstanding. The patient was from a remote community in northern Alberta and there was only one bus that departed at 4 p.m. With no pocket money or place to stay in the city – the patient had no other option to get home.

“I didn’t realize that before,” says Kirkaldy. “Patients can’t stay for the weekend; they have to go home. Some patients arrive home at 11 p.m. on Friday night and by Sunday they’re travelling back for treatment on Monday. It’s exhausting for them.”

When patients reach the Cross, Kirkaldy knows they can feel exhausted, scared and vulnerable. She doesn’t rush her interactions with them. “I tell them, this is who I am, this is where I’m from – my mom was from up north. That sets the stage for a more trusting relationship.”

While relationship building is important in helping all cancer patients navigate through the medical system, Kirkaldy believes that it’s even more critical for health professionals to develop relationships with aboriginal cancer patients. “Often, patients tend to not communicate very well with health professionals. It’s sometimes about mistrust with the system, or they don’t want to confront people in power,” Kirkaldy explains.

In her position, she’s striving to bridge the cultural gap between patients and medical professionals. She believes that the medical system doesn’t always take into consideration the social and environmental challenges that patients are facing in their communities. “People don’t realize that social conditions on some First Nations reserves and Métis settlements are comparable to Third World countries,” says Kirkaldy. “There’s overcrowding in houses. Some reserves don’t even have running water to their houses. There are 46 reserves in Alberta and 41 still have to boil their water before drinking.”

Aside from her counselling work with patients, Kirkaldy also facilitates educational workshops for health-care professionals to help them understand aboriginal cultural perceptions of cancer and Western medical treatment. Some traditional people believe that cancer is contracted as a form of “punishment” or bad karma for a negative action. Others believe it’s contagious. One of Kirkaldy’s former patients recovered from his treatment, which led his family to believe he never had cancer at all.

Female aboriginal cancer patients can face additional cultural challenges to receiving care and treatment. In many cultures it’s believed that women, as the bearers of life and creation, are very powerful. The womb is considered sacred. Kirkaldy says that female patients are, at times, reluctant to allow oncologists to examine them.

“Many women are shy about being examined,” she says. “That can affect screening for cancer, as well. Some women don’t want anyone examining them unless it’s absolutely necessary. It could be part of the reason why women come for treatment at later stages.”

Despite the challenges her job entails, along with the larger socio-economic barriers her patients are facing on a daily basis, Kirkaldy is striving to work “one patient at a time” to help aboriginal patients access resources and navigate through a health-care system that’s created years of fear, mistrust and misunderstanding. “We can’t fix aboriginal health overnight,” says Kirkaldy. “But we can try to help one person at a time.”

Although Kirkaldy’s position as aboriginal navigator is relatively new, she’s already made strides to support patients and oncologists, advocate provincially and federally for aboriginal health and document cases for statistical purposes. Kirkaldy feels grateful for the opportunity to work closely with her patients and learn from elders and knowledge keepers in aboriginal communities. “It’s definitely made me understand what my mother went through in residential schools. Growing up, there were things I didn’t understand. But now I’m seeing the long-term effects – and it’s making sense,” says Kirkaldy.

“My work has led me closer to my culture. I find myself thanking the Creator often. I’m learning to find my spirit.” 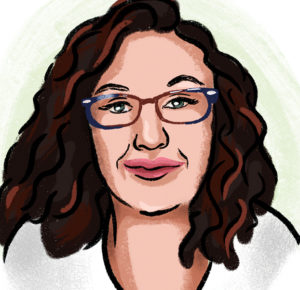 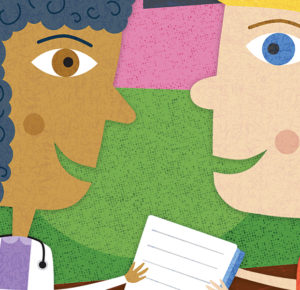