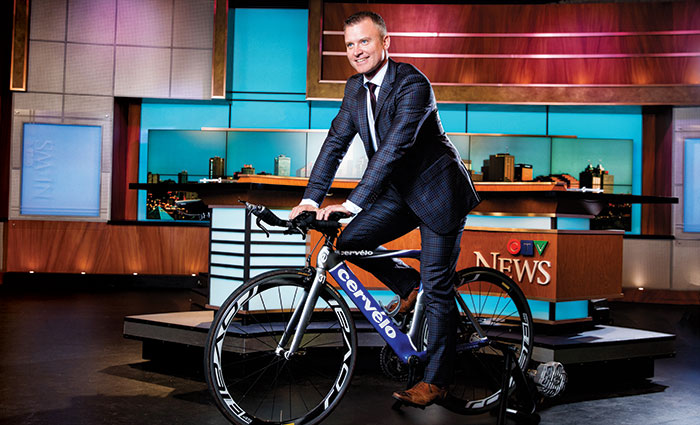 If there’s one thing that Edmonton broadcast journalist and TV personality Rob Williams wants to do, it’s bring hope to cancer patients and their loved ones. And he’s been moving towards that goal from the saddle on his bike.

Each year Williams, the co-host of weekday morning show CTV Morning Live in Edmonton, cycles 100 kilometres to raise money for the Bryan Mudryk Golf Classic, with funds benefitting the the Alberta Cancer Foundation in support of the Cross Cancer Institute.

“The fact that we go for a bike ride and raise a little bit of money may not seem like a whole lot in the grand scheme of things, but at least we’re trying to do something, like so many people are, to help the cause,” says Rob Williams.

In the nine years since he first hopped on his bike, the money Williams has raised has gone towards the purchase of new medical equipment and technologies, like a PET-MR and image-guided radiation treatment – sophisticated technologies that provide valuable insights into providing individual and precise cancer treatment.

Williams has worked in radio and television for more than two decades and is a friend and former colleague of TSN anchor Bryan Mudryk, who as a young man fought cancer twice and beat it – and then vowed to give back to the hospital that helped him heal.

“But just as importantly, it’s hope that we’re trying to raise too,” Williams continues. “It’s incredible some of the work that people are doing to raise money, because there are so many people who are dealing with cancer.”

The Williams & Mudryk 100K for the Cross is a companion fundraising event to the Bryan Mudryk Golf Classic, which was established by Mudryk and his family in 2003. Over the past 13 years, the annual Bryan Mudryk Golf Classic and its associated companion events have raised nearly $1.5 million for the Alberta Cancer Foundation – including $170,000 through the Williams & Mudryk 100K for the Cross. “It’s a pretty good testament to the power of never giving up the fight,” says Williams, who met Mudryk when they were both working the weekend shift at CTV in Edmonton. 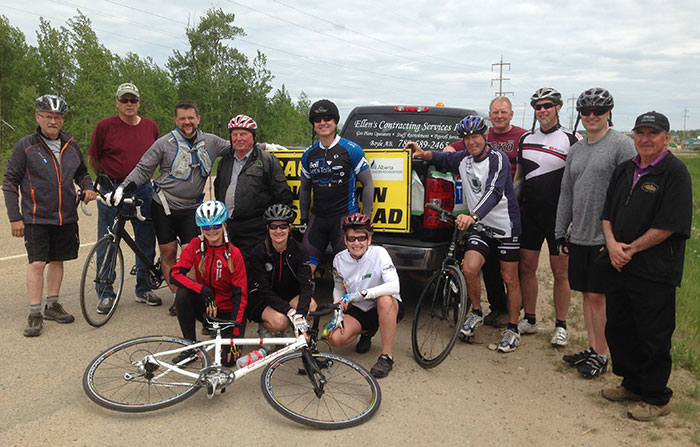 ON THE PATH: Williams and Mudryk, and their support team, during this year’s ride.
Photograph by Curtis Comeau

Williams – who is originally from Irma, a village about an hour-and-a-half southeast of Edmonton – launched his radio career at LW1230 in Wainwright, before moving to Medicine Hat where he worked in radio and television. He’s been with CTV in Edmonton since 2000, and has co-hosted Morning Live for the past four years.

The Bryan Mudryk Golf Classic had been running for several years when Bryan’s older brother, Marty, decided to make his own contribution to support the cause. Marty decided to do a bike ride, pedaling from Fort Saskatchewan north to Boyle, a distance of approximately 120 kilometres. He rode on his own that first year, accompanied by his wife Kristen and mother Terry Mudryk-Harbarenko, who each drove a pilot vehicle.

After his ride, Marty told Williams that he was going to continue the ride as an annual fundraiser, and asked if Williams would be interested in joining him. “I said, ‘yeah it’s not far, no problem.’ It turned out he was serious about asking me,” Williams says, “Because he came back in 2008 to remind me that I was going to be biking with him in June. That was the second year for the ride – it was myself, Marty and two other guys.”

Now, about 10 to 15 riders participate in the ride through Athabasca County, which starts and finishes in Boyle. It usually takes about five hours and everyone stays together, riding as a team along with an accompanying support group. “It’s never been a race,” Williams says. “We ride for Bryan and everybody else who has or who will be going through a cancer fight,” he says. “Now that I’ve been involved with it for this number of years, I can’t imagine not doing it, because it’s the right thing to do.”

He adds: “You always wish there was something else you could do. The fact that we go for a bike ride and raise a little bit of money may not seem like a whole lot in the grand scheme of things, but at least we’re trying to do something, like so many people are, to help the cause.” 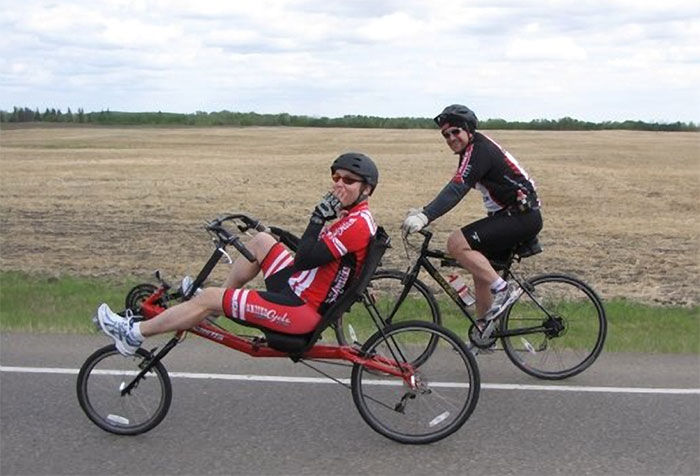 ON THE PATH: Williams and Mudryk during this year’s ride.
Photograph by Curtis Comeau

You can find out more about the Williams & Mudryk 100K for the Cross on Facebook. Other Bryan Mudryk Golf Classic companion events include the Bryan’s Angels stair climb, in Edmonton’s river valley. Williams has done the climb at Edmonton’s Royal Glenora Club’s stairs to support Bryan’s Angels, and he regularly attends the golf tournament with colleagues from CTV and other media outlets. And he has helped out in other ways as well – he has served as a referee in the World’s Longest Hockey Game, another fundraiser for the Alberta Cancer Foundation. “I knew they were looking for refs, so why not get involved in such a spectacular event that means so much to so many people?” he says. “I didn’t mind taking a 3 a.m. referee shift to help out a little bit.” He’s also reported from the event, broadcasting rink side. “We help get the word out, and we tell stories about it while it’s happening,” he says. Since 2003, the World’s Longest Hockey Game has raised more than $3.7 million for projects supporting patients at the Cross Cancer Institute and elsewhere.

Next year will mark the bike ride’s 10th anniversary, and Williams and Mudryk want to make it by far the biggest one they’ve ever done. “We want you to bike with us,” says Williams, who dreams of inspiring others to do what they can to give back, in their own way. “You don’t have to do anything extravagant. You just have to get involved.”

To help support next year’s ride, or to participate yourself, visit albertacancer.ca/bryanmudryk or call 780-887-4936 for more information.

Healthy Meals in a Hurry