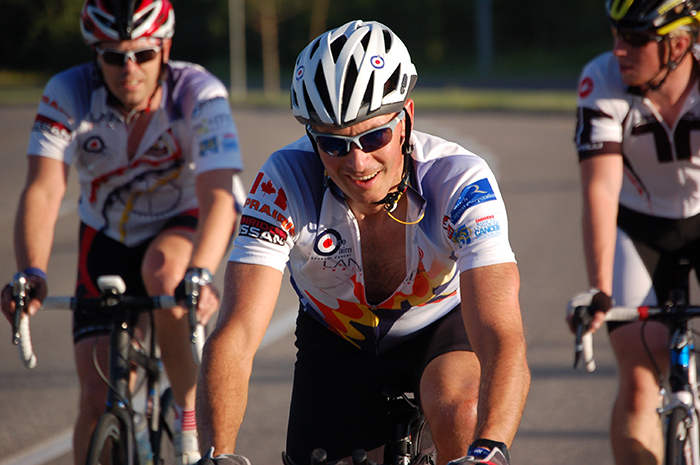 As if riding more than 200 kilometres over two days in the Enbridge Ride to Conquer Cancer were not enough, one team decided to up the ante just two weekends before this year’s event.

The plan was simple: to climb the hill near Dr. Nigel Brockton’s Calgary community, Tuscany, on a bike enough times to equal the distance of climbing Mt. Everest. Inspired by a group of Australians that had completed the same “Everesting” feat – to date some 660 worldwide people have completed the challenge – Brockton, with the support of his One Aim team, became the first person in Alberta.

“Every year I set some kind of crazy riding challenge,” says Brockton, who founded the One Aim team in 2008 for the first Ride to Conquer Cancer. “I worked out how many times I would have to go up and down to do it. One hundred fifty-seven would have but I didn’t want to come up short – so I did 161.”

Brockton took more than 17 hours to complete his mission, raising $520 for the Alberta Cancer Foundation in the process. The money topped up what Brockton and his team members needed to enter this year’s Enbridge Ride to Conquer Cancer. The One Aim team’s 2015 goal is to raise more than $300,000, while its five-year fundraising total for the Alberta event is close to $2 million, with proceeds benefitting Alberta’s cancer centres.