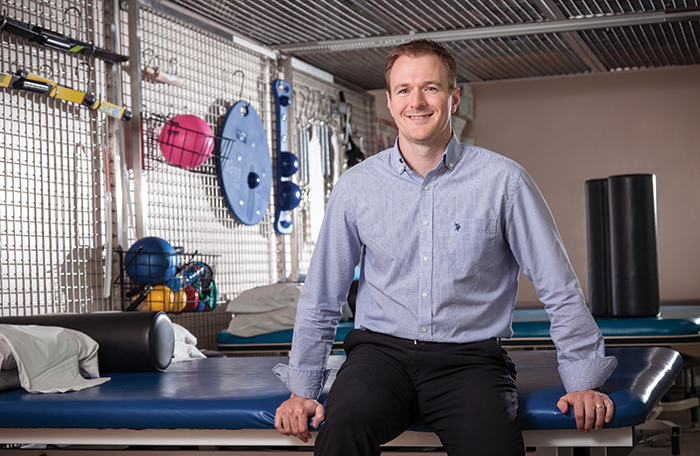 MOVING FOR HEALTH: Alex Grant provides physiotherapy options for cancer patients who are struggling with fatigue.
Photo by Rob Olson

We might be far from a cure, but thanks to advances in rehabilitation oncology, those in treatment or remission have a growing hope for a better quality of life.

Alex Grant, a physical therapist at the Jack Ady Cancer Centre in Lethbridge, was a young Ontario boy when his 16-year-old sister was diagnosed with Hodgkin’s lymphoma. At the time, the nearest hospital for chemotherapy treatment was a two-hour drive away in London. Fast-forward a few years, to when he and his wife were dating in university, and his future mother-in-law was diagnosed with breast cancer. Experiencing heavy fatigue, she was unable to do simple things like mowing the lawn. Helping in any way he could, he felt the weight of a cancer diagnosis was heavy, even outside the clinic. Intrigued at how he could help other people with similar challenges, Grant went on to complete both his bachelor and master’s degrees, finishing his studies at the University of Alberta (Calgary campus) in 2014.

Grant is working to connect with doctors and nurses in the region through a variety of presentations and meetings, and hopes to eventually start a community group that offers basic exercise for cancer survivors.

Every year, the Alberta Cancer Foundation awards two students a six-week studentship at the Cross Cancer Institute in Edmonton, the Wayne and Linda Sartore Summer Studentship in Palliative Care and Supportive Oncology. Grant succeeded in the competitive application process, and moved from Calgary to Edmonton to complete the six-week term in the capital. While working with Janice Yurick in the department of rehabilitation medicine, Grant fostered his desire to learn and help as many people as he could in the future.

“That speaks to his commitment to the area of rehabilitation oncology and to implement the whole-person approach to cancer-care,” says Yurick. “He certainly embraces that. I’m sure he’ll continue to do so in the future, he’s a tremendous team player. He has the patient at the centre of all his treatment goals and aspirations.”

It was Yurick who encouraged him to apply at the Jack Ady Cancer Centre when a physical therapist position, funded by the Alberta Cancer Foundation, opened up last fall. Again, he applied and succeeded. From last December through May of this year, Grant and the team met with stakeholders, oncologists and palliative care professionals to get an idea of where the gaps in service were. More communities in Alberta are starting up specialized clinics, including places like Red Deer and Grande Prairie. Lethbridge has a dedicated clinic, meaning residents of the Chinook Region, will no longer need to travel to Calgary for specialized therapy. Or worse, do without.

“What stood out the most when I was phoning or meeting with different groups in the area, whether it was palliative care or breast health, was how excited everybody was that the service was starting up here,” says Grant.

As of last spring, he was splitting his days between the Chinook Regional Hospital and the clinic at the Jack Ady Cancer Centre. Fortunately, both are in the same building, keeping Grant’s commute from role-to-role minimal. Since the demand for therapy supersedes the availability of practitioners, as of this fall Grant will be full-time in the clinic offering rehabilitation oncology services.

Many of his patients come to him complaining of fatigue, mobility issues or a type of swelling – some swelling occurs when a patient has had lymph nodes removed or radiation therapy (which may result in a condition called lymphedema), and some occurs due to steroid treatment 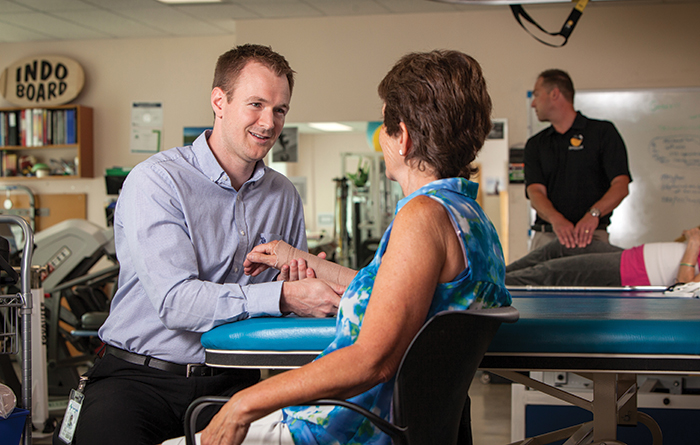 STRETCHING IT OUT: Grant’s expertise is so in demand that he spends his days split between the Jack Ady Cancer Centre and the Chinook Regional Hospital.
Photo by Rob Olson

“Lymphedema is chronic, unfortunately, it’s not curable. So we do a lot to manage it, and they can often manage it at home,” says Grant. “There is a large range of impairments we can alleviate through rehab, or at least reduce the effect of. However, I do ask in all the referrals how much those things are affecting their life. Fatigue, generally, affects people’s life in a very large way.”

On a typical day, Grant arrives at the hospital around 7 a.m., following morning coffee enjoyed at home. He’ll stay on the unit at the hospital until mid-morning, when he makes his way to the Jack Ady clinic, where he devotes an hour to each client appointment. From patients still undergoing chemo, to those in palliative care, to those in remission after 10 years, Grant sees them all.

For instance, one client of Grant’s came to see him with limited movement in her arms and shoulder, due to radiation and surgery. She felt afraid to try anything on her own for fear of making her condition worse. This is common among Grant’s patients, who want to understand what is going on in their body and discover ways to help themselves.

Grant showed her some simple stretches she could do on her own to loosen up the scar tissue. “As she made progress, her fear and anxiety about the cancer reduced. She was very diligent, and it gave her power over what had happened to her,” says Grant. “A lot of people, when they have a cancer diagnosis, feel like there’s nothing they can do about it. You have to take the medical treatment that’s available, and hope that it works. In her case, with this rehab process, she was able to use that and fight for herself and feel responsible for the progress she made.”

“Health-care professionals in general aren’t necessarily as aware of how rehab can help in the cancer journey. Up until a few years ago, cancer wasn’t necessarily the chronic disease it is now,” says physical therapist Alex Grant.

The long-term goal of rehabilitation services at the Jack Ady Cancer Centre is to have a full centre with more physical therapists, occupational therapists and even a speech pathologist, if needed. While they already have a waitlist of four to five weeks, Grant remains hopeful that the difference their services make in the Lethbridge region are obvious.

“Regardless of what the situation is, I feel very satisfied, and happy, when a person comes back to me and says that some aspect of their life has been improved by the rehab we’ve done,” he says. “I’m never here to get rid of their cancer, but there’s still something I can do to make their life better. It’s not about feeling sad or sorry for someone at any point. It’s about asking, ‘Is there some way that I can help you’.”

While patients are definitely being helped, there’s still a long way to go in letting the community of health practitioners, and the general public, know about their work.

“One of the largest issues is that people don’t necessarily know to refer to us for the problems that they’re seeing,” says Grant. “Health-care professionals in general aren’t necessarily as aware of how rehab can help in the cancer journey. Up until a few years ago, cancer wasn’t necessarily the chronic disease it is now. Medical interventions have been vastly improved over the last 10 to 20 years and now more people are moving into survivorship or living much longer with the disease than they could have previously hoped for.”

Grant is working to connect with doctors and nurses in the region through a variety of presentations and meetings, and hopes to eventually start a community group that offers basic exercise for cancer survivors. “Rehabilitation oncology is really a shining example of the advanced practice and specialized skill that is available at a basic level in the community, but not at a specialist level,” says Yurick. “Those with experience in rehab oncology are few and far between in the community, so accessibility to that level of understanding and professional skill has been limited. Not to say we don’t work with the community practitioners and try to serve them – we do. But sometimes it’s beyond their scope or experience level, so having those services closer to home for more Albertans is really exciting.”