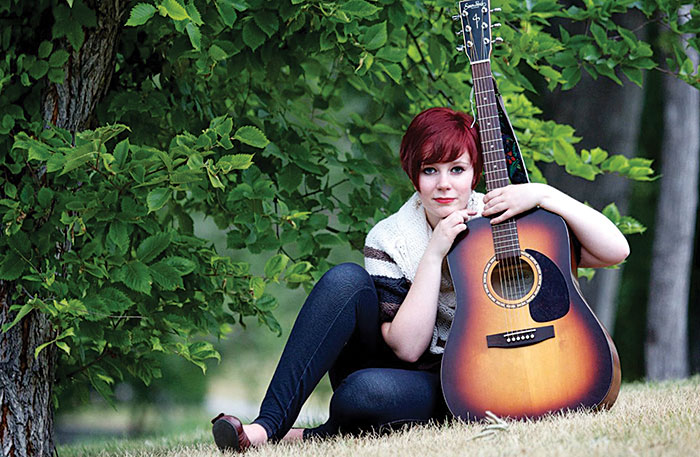 A talented singer with dreams of performing on Broadway in New York City, Taylor Bell had no qualms about moving to Toronto after high school to pursue her ambitions. Soon, she was landing roles in plays and was accepted to the Randolph Academy for the Performing Arts, a private arts college that trains students in dancing, singing and acting. At 19, the Calgary native had life by the horns.

But when her mother flew in for a visit, she found Taylor feeling rundown. “She had a bad cold that wouldn’t get better,” says Jacqueline Bell. And, seemingly unrelated, Taylor’s gums bled when she brushed her teeth. To be on the safe side, Jacqueline made an appointment for her daughter to see a doctor when she returned home for a visit, two weeks later.

“We became more supportive of each other. We watched out for each other,” says Jacqueline Bell.

What should have been a quick visit to the doctor became something else entirely. Concerned that Taylor was seriously ill, the physician ordered bloodwork to be done that afternoon. “By 6 p.m. they were on the phone, telling us to go to the hospital immediately. They didn’t like the way the results were looking,” says Taylor’s father, Don. Referred to the Tom Baker Cancer Centre, Taylor met with hematologist Dr. Mona Shafey. Her assessment was grim: there was a 99 per cent chance that Taylor had leukemia.

The entire family reeled from the news, including Taylor’s younger brother, Travis. It seemed impossible. For one thing, the symptoms had seemed trivial – Jacqueline figured her daughter had a bad flu and maybe gingivitis, particularly since Taylor had always been healthy and energetic, keeping herself busy with baseball and performance. And at 19, she seemed too young to get cancer.

But there was no time to come to terms with the diagnosis: treatment was to begin immediately. Shafey explained that leukemia, like other blood cancers, was often curable – but treatments needed to be aggressive. In fact, within 24 hours of confirming the diagnosis of acute myeloid leukemia, Taylor began the first of four rounds of chemotherapy as an inpatient at the Foothills Medical Centre.

Even though her life had been derailed, Taylor kept her chin up. Like anything she did, she approached treatment with a spirit of adventure – and invited her friends along for the ride. They often accompanied her during her treatments and kept her company during her hospital stays. Don recalls that sometimes the nurses would give them crayons to sign the window with: “I could look across the crowd and see Taylor, and she’d be just grinning.”

As part of her treatment, Shafey recommended that Taylor receive a stem cell transplant. She was a good candidate for the procedure, which involved injecting stem cells – derived from the bone marrow of a donor – into her body to fight the cancer cells. If it worked, she’d be cured. Her chances were 50/50, but everyone on her side was optimistic.

For three months after the procedure, the Bell family waited nervously to find out if it would work. When some follow-up results came back from the lab, Shafey reviewed it three times before asking the family to come in for a meeting. She prepared herself for a tough conversation.

The day of the appointment, the doctor met with the entire family – including Taylor’s brother Travis, who’d been pulled out of school. “We went into a tiny little, ugly room,” says Jacqueline. Before the doctor could say anything, Taylor spoke. “She said, ‘It didn’t work, did it?’ ” says her mother. “Dr. Shafey broke down and said, ‘No. It didn’t.’ ”

[easyrotator]erc_2_1440014305[/easyrotator]
MAKING MEMORIES: After moving back to Calgary, Taylor spent some much-needed relaxation time with her family during her treatment.

As a doctor who has to give bad news to many cancer patients, Dr. Shafey tries not to get upset during these difficult conversations with patients – but sometimes tears happen. “Emotions are running high and the news can be devastating. I try to hold it in, but sometimes I’m overwhelmed and find myself crying with them,” she says.

With no other curative treatments available, Shafey told the family that Taylor would likely have six months to live. She advised her young patient to think about how she wanted to spend that time: “I think it’s important to let people know that they are going to die of their disease and to take advantage of the time left to do what they want to do,” she says.

It was a traumatic prognosis for the entire family and, once again, there was little time to work through the grief. Now Jacqueline, Don and Travis had to be strong for Taylor, to help her make the most of her final days. “You have to somehow remain positive,” says Don. “Every minute of every day, you try to make it work and try to make it the best. You try to turn every negative into a positive. You’ve got to.”

One negative-turned-positive was Don’s unemployment. Just before the leukemia diagnosis, he’d been laid off from his management job at a large warehousing company. As Taylor went through treatment, he’d been glad to be around, and now that time was even more precious he was even more grateful. Jacqueline, a flight attendant, was also able to be home thanks to a supportive employer.

The couple decided that Travis, then 16, should continue going to school and stay busy with sports. Looking back, he’s grateful for that decision: “It helped me keep my mind off of things.” Plus, there was comfort in a familiar routine. Nevertheless, Travis spent a lot of time with his big sister. At this time, Jacqueline and Don watched their son carefully to make sure he was coping. “The big push was keeping an eye on Travis to make sure he knew he was important, and to be there for them,” Jacqueline says.

That winter, the family spent a lot of time cuddled in front of the living room fireplace, where they talked and watched movies. Taylor wanted a dog, so they adopted a black lab puppy that she named Cooper (and nicknamed “Crazy Cooper” for his household antics). With Christmas approaching, it was important to Taylor to get her shopping done early. “We spent a lot of time at Cross Iron Mills,” Don says.

But Taylor’s health was declining rapidly, and there wasn’t time to do everything the Bells had planned. The family had hoped to take Taylor to Disneyland and family friends had successfully crowdsourced donations for the trip. Unfortunately, Taylor passed away before they were able to go as a family. While grief-stricken, the Bells decided to go in her honour a couple of months later.

In the time between Taylor’s initial diagnosis and to her death, family and friends rallied around the Bells. “The support we had was just incredible – and we needed it,” says Don. But to get through the day, they drew strength from within the immediate family. During these harrowing months, the family did their best to be gentle and patient with one another, says Jacqueline: “We became more supportive of each other. We watched out for each other.”

It’s been only a year-and-a-half since the Bells lost Taylor, and they continue to hear from people who were touched by her talents. But while their grief is fresh, the family is doing what they can to add to her legacy – and help others affected by cancer. In addition to being interviewed in the media, they’re planning to start fundraising in Taylor’s memory. “If anyone was ever sick or needed help, she would be the one to raise funds,” says Jacqueline. “She was very, very caring.”

Tough talks are a fact of life for healthcare teams. Fortunately, there are supports to make it easier

For patients and families, a diagnosis of incurable cancer is nothing short of traumatic. But for the bearers of bad news – usually doctors with support from nurses or members of a healthcare team – these conversations can be painful, too. It can be hard to find the right words.

“Traditionally, it’s an area that’s been under-resourced. The majority of medical training is focused on curing and fixing,” says Bert Enns, who leads the Tom Baker Cancer Centre and Calgary Zone Palliative Care Collaborative project. “Many doctors have had limited training about how to have these conversations when a cure isn’t possible.” Fortunately, there are resources in Alberta to help clinicians deliver the news with care and compassion.

Find out what’s in the air you breathe