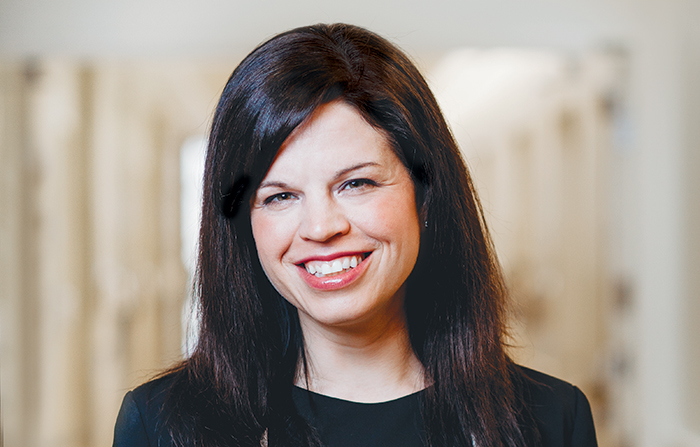 KEEPING AT IT: Dr. Lynne-Marie Postovit’s research has been tackled in five-year increments.
Photo by Cooper + O’Hara

What drives people to do the work they do? It’s an age-old question with no simple answer. But even the most motivated employees can experience a slump in enthusiasm from time to time. For cancer researchers, the ability to rise above roadblocks and waves of uncertainty is a necessary skill as they tirelessly work to discover and test scientific breakthroughs that might one day affect millions of lives.

Dr. Ing Swie Goping, a breast cancer researcher and associate professor at the University of Alberta, is all too familiar with the patience it takes to reach a breakthrough. Goping discovered a particular protein in breast tumours (commonly referred to as BAD) that could change the way some patients are treated. “We’re trying to find a way to identify patients that would do well with a particularly aggressive chemotherapy called taxane – currently, we don’t know why some patients have done well and some haven’t,” she says. “If proven, patients that don’t have a particular marker wouldn’t have to go through this very aggressive treatment, with quite serious toxic side effects, for no benefit.”

“None of the major advancements were just one person, province or country – so to keep that in mind is very humbling,” says Dr. Lynne-Marie Postovit.

Goping and her research team have studied hundreds of breast tumour samples in an effort to prove that women who had high levels of BAD protein in their tumours responded well to taxane therapy, and vice versa. “I don’t think it’s a long time,” she says. “I think that when we look at the history of actual developments that turned out to be clinically useful, they can take 40 years – there are successes and obviously setbacks all through that time, but it’s a process that has to be done.”

Goping agrees that there is an intense amount of pressure, but it’s all part of the process. “You have the pressure to make the discovery in the first place and if it’s not ‘the one,’ be OK with that,” she says. “You have to be willing to say ‘I accept failure’ because it’s part of the process and at the end of the day it’s new knowledge and everyone benefits.”

For Goping, one has to be both stubborn and tenacious while drawing support from the international scientific community. “Whatever you’re doing in the scientific realm is knowledge that can be used for something you never would have expected it to be used for,” she explains. “As long as it’s published and out there for other people to see – that’s the whole scientific purpose. As long as I believe that the scientific process is working, that this new knowledge we’ve generated is important, then I can stay motivated.”

Dr. Lynne-Marie Postovit, an associate professor in the University of Alberta’s department of oncology, examines both breast and ovarian cancer in her lab, and agrees with Goping that cancer research is a truly global effort. “I always say one of the great things, when you think about resiliency and science, is that as we move through the process, we disclose and publish our work. So even when we fail, it’s a win for the field in terms of refining what it is we’re looking at,” she says. “I’m driven by making a difference for patients. While it might not be my lab, per se, that makes the discovery, if we contribute let’s say 50 per cent of the knowledge that led to the discovery somewhere else, that still benefits patients in the end.

“It’s the small breakthroughs,” she says, that make the wait worth it. “None of the major advancements were just one person, province or country – so to keep that in mind is very humbling.”

Over the next five years, Postovit’s lab hopes to develop a biomarker test to detect ovarian cancer at its beginning stages, when it’s localized and highly curable. “Right now we don’t have something like that so a lot of the time the disease isn’t detected until much later on,” she says. “The experiments are designed in such a way that there really isn’t a dead end, just redirection – taking that piece and applying it to a different question. You have to be brave because there is a lot of uncertainty as you work through the initial discovery.”

Postovit admits she sometimes feels a little hopeless when she interacts with patients, knowing her work likely won’t benefit some people in time. “It’s very humbling but at the same time it provides even more motivation to get in there and work towards something for the next patients – the next breakthroughs,” she says. “If you do really great work, then great things will come.”

Armed with an unbreakable spirit, she turns every disappointment into an opportunity. “It’s what keeps me motivated and going through,” she says. “I don’t know if I chose this line of work or if it chose me.”

Both Goping and Postovit agree that the biology of cancer is exceedingly complex and funding is crucial to allow scientists to move forward and get to the point where everyone can survive cancer. “I might not find the magic bullet for ovarian cancer, but one of the brilliant minds in my lab might, so we want to make sure the next generation of researchers stay in the field,” says Postovit.

Colorectal Cancer in Canada by the numbers