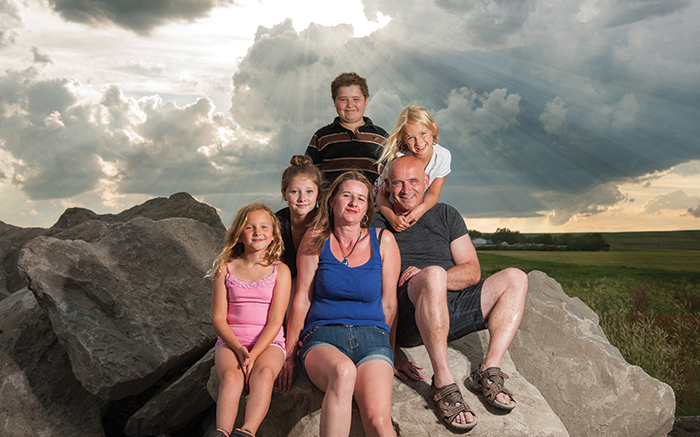 FULL HOUSE: The Scotts pose for photos near their home in Airdrie. Missing is Braden Keating.
Photo by Don Molyneaux

Andrea Scott’s life changed in an instant when, in 2011, her friend Deana Keating, a single mother of three, died of cervical cancer. Without even a word, Andrea and her husband Jim – already parents to two young children – left the hospital with three more. “We didn’t expect to have five children,” Andrea says today. “But I also didn’t expect my friend to die.”

Andrea knew Keating was sick about a year earlier, but didn’t know how bad it was. “I was just under the impression she was doing OK and everything was going to be OK. We talked about other stuff,” Andrea says. “She didn’t want to think about it. She was tired after being sick and exhausted raising her kids as a single mother.”

The ugly truth revealed itself on a June afternoon, when the Scotts learned Keating had taken a turn for the worse. By the time the couple arrived at the hospital, Keating had already died. The couple met with Keating’s relatives and three children as a social worker tried to determine the trio’s fate. With relatives unable to take the children, the Scotts knew what they had to do. “We didn’t even talk about it,” Jim recalls. “I could read Andrea’s mind.” Soon after, the couple went to court to officially become their parents.

Expanding their family was easier said than done. The couple and their children lived in a two-bedroom home in Airdrie. Barely able to make ends meet, Jim was dealing with the aftermath of losing his excavating business. As the family turned to food banks to feed seven, Canada Revenue Agency was garnisheeing a hefty portion of any income they did have.

“I didn’t think about the financial ramifications. You are there. You do what you do,” Jim says. “I truly believed if we lived life appropriately our needs would always be met.” Soon, Jim went to work at a car dealership. “I was penniless and had never sold a car in my life,” he says. “You pony up or you wallow in it.”

And pony up they did. Andrea took Keating’s children up on their one request – to continue the homeschooling their mother had started. “I’m no teacher and I’m not that patient,” she says. “But I managed to pull off Grade 1. I was winging it.”

The family’s first summer was spent camping, an activity they used to bond and, as much as they could, try to forget the tragedy which brought them all together. And there was the day-to-day logistics of sharing a cramped home and the children’s shift from friends to siblings. Jim – who also shrunk by 100 pounds as his family grew – says: “there were days when it was either food for them or myself.”

Despite a tough transition, the children – Konin and Kailey, the Scotts’ biological children, and Keating’s Angel Ana, Aurliea and Braden – meshed and the couple knew they had done right. “For the first six months, Angel Ana wouldn’t talk to anyone except our three-year-old daughter, Kailey,” Andrea says. “I can’t imagine what would have happened if she had been sent away. I don’t know if she could have made it.”

Some, seeing their struggles, questioned why the pair took on the tremendous task of opening their hearts and home to the children. But the couple never doubted their decision. “When there are three kids in a room who have lost their mother, you can’t just walk away,” Jim says. “We were pretty sure they wouldn’t stay together if we didn’t take them. It was either us or social services. We figured it had better be us.”

Keating’s grandmother, Lesley Munns, couldn’t be happier. “I’m proud of the kids and certainly proud of Jim and Andrea. The kids have a wonderful life because of them. I feel really blessed they took over,” says the 92-year-old. “They’re five kids that are just family, that’s all there is to it.”

With the help of Andrea’s mom, Carole, who gave them an early inheritance, the Scotts moved into a new, three-bedroom home. And life is good, says Jim, who cherishes a Sunday tradition with his brood. “I make pancakes for the children,” he says of how he starts his only day off. “No matter how tired or crappy I feel, I just do it. They enjoy it.”

This past August, for the second year in a row, Jim planned to bike in the Enbridge Ride to Conquer Cancer benefitting the Alberta Cancer Foundation, to raise research dollars to save people like Keating in future. Andrea says she has been too busy with the daily grind to be philosophical about the twist her life has taken. But when it comes to helping her friend, she is certain of one thing: “You can sleep at night,” she says.

A Chat with Aurliea, age 11

THE BEST PART ABOUT HAVING A BIG FAMILY: There is always someone around to hang out with if you are bored. It’s awesome when you are on vacation. Everyone gets to hang out all the time.

PET PEEVES: In the car, people start fighting. There are so many of us in a tight space. If my little sister is singing, my brother is yelling at her to stop it.

MAKING IT WORK AT HOME: We have set chores. Mine are wiping the counter, washing the pots and sweeping the floors.

HOW THE TRANSITION HAS GONE: I thought it would suck and I would miss my mom a lot. But it doesn’t. I still miss my mom, but I don’t think it sucks.

WHAT YOU MISS ABOUT YOUR MOM: Just everything.

Get Out There, Alberta

Archery a fast-growing activity in Alberta