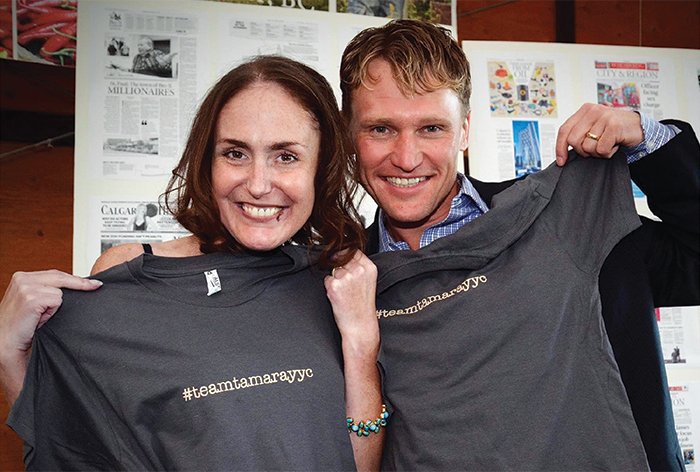 Tamara Gignac and her husband Heath McCoy pose with #teamtamara T-shirts during a fundraiser.

In June 2014, Colette Derworiz visited her friend and Calgary Herald colleague Tamara Gignac at the hospital. Gignac had just been diagnosed with stage four metastatic colon cancer, and had begun treatment:

Soon after, with former-Herald journalist Suzanne Wilton and a number of their friends and colleagues, Derworiz started the TeamTamaraYYC fundraising campaign in an effort to help Gignac and her husband, Heath McCoy, as they dealt with her diagnosis and continued to raise their two young children.

“At first we didn’t know if we should do a pub night or something else, maybe something online,” says Derworiz. With Wilton spearheading the planning, their idea quickly turned into a huge fundraising night held at the city’s Crossroads Market. The event’s scope grew faster than anyone could have imagined – from a small get together to an evening with sponsors including local restaurateurs and businesses.

After the event was done, the fundraising spirit lived on through a Team Tamara Facebook page. Over Christmas, the Alberta Cancer Foundation also featured Gignac in one of its More Moments video campaigns, which inspired viewers and went on to help raise more than $90,000 for the organization.

“We needed to do it as a big group hug.”– Colette Derworiz

In the year since her diagnosis, Gignac’s words and graceful spirit had moved those around her – and even strangers who read and heard her words. Derworiz had made plans with TeamTamaraYYC followers to run in the Scotiabank Calgary Marathon this past May. Sadly, two days before the race, Gignac died.

“It didn’t go the way we thought it would, obviously,” says Derworiz, who had borrowed a wheelchair from the Alberta Cancer Foundation to push Tamara in along the race route. “Everyone was finding out she died the day before we were supposed to run. Suzanne said we needed to do it as a big group hug. It felt right to do what we were going to do in her memory, instead.”

They Ought to Know