With cancer rates increasing at an alarming pace, it’s worth taking a look at diet as a possible countermeasure. Here’s a sampling of healthy ingredients with cancer-prevention properties, and a little about what makes these “super foods” so, well, super.

Soy. From soybeans to soy sauce, miso to tofu, soy contains isoflavones, which are anti-cancer compounds. Experts recommend about 50 grams per day of whole food, like edamame or dry roasted soybeans. There may be some links between soy and a reduction in breast and prostate cancers, especially if consumption starts before puberty.

Garlic. Sure, they help with warding off vampires, but plants in the garlic or allium family (including leeks, shallots and chives) are thought to play a role in keeping away digestive system cancers such as esophageal, stomach and colon cancer. In China, one recent study showed that people who consumed small amounts of garlic and onions had three times a greater chance of developing stomach cancer than those who consumed more of it.

Cabbage. From kale to broccoli and Brussels sprouts to cauliflower, plants from the crucifer family have long been lauded for their medicinal abilities. Studies show diets rich in cruciferous vegetables are linked to a drop in the risk of certain cancers, including breast, bladder, lung and gastrointestinal, as well prostate cancers. To bring out the best in their anti-cancer potential, cruciferous vegetables should be lightly cooked and thoroughly chewed.

Berries. Most berries (including raspberries, strawberries and blueberries) are a great source of several classes of polyphenols, which possess their own anti-cancer potential. Recent data shows that molecules found in blueberries, for example, might even slow the growth of tumours.

Tomatoes. Initially discovered by the Spaniards who conquered Mexico in the 16th century, tomatoes were then brought back to Spain, and later taken to Italy. Recent findings indicate that Lycopene, a pigment and compound responsible for the tomato’s bright red hue, is tied to its anti-cancer potential. Cooking tomatoes in oil or vegetable fats maximizes their anti-cancer properties.

How Smoothies Give You a Nutrition Boost 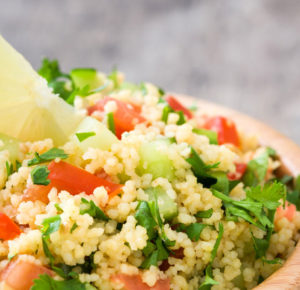