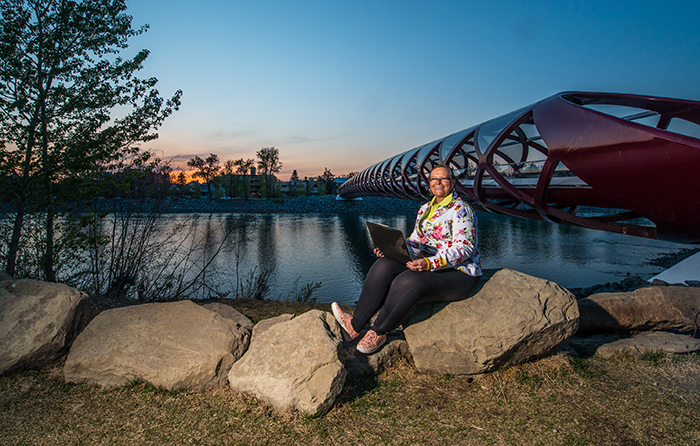 FINDING HER VOICE: When she was diagnosed with cancer for a second time in 2012, Calgarian Mary Beth Eckersley turned to the Internet and started the blog, I Will Fight for Me, to pen her journey.
Photograph by Brian Bookstrucker

There were times when chemotherapy made Mary Beth Eckersley too sick to read or watch TV. The sheer exhaustion made it impossible to focus for more than minutes at a time.

“I decided I’d make the experience as positive as possible, and put as much of it in the light as I could,” says Mary Beth Eckersley.

But even at her worst, she could blog. “I’d do a couple of lines, then stop,” she says. “It fit what I could do at the time.” For Eckersley, this was a godsend. She’d been diagnosed with stage three breast cancer in 2012 – her second bout with cancer, as she’d survived cervical cancer 30 years earlier. But back then, her treatment had only consisted of minor surgery. This time, she faced multiple invasive surgeries and chemo. “This was a whole other ball game,” she says.

Like many cancer patients, Eckersley started a blog to write about her experience. “I decided I’d make the experience as positive as possible, and put as much of it in the light as I could,” she says. “It’s the darkness that scares us.” She also hoped it
might help other patients at earlier stages of their journey. So, for the last three years, she’s logged on to her blog – I Will Fight For Me – to share everything from medical treatments, to participating in the Enbridge Ride to Conquer Cancer, to her recent decision to become a certified Aqua Fit instructor.

Research has proven that there are many therapeutic benefits to expressive writing. A regular writing practice can reduce stress, improve memory and sleep patterns, boost immune cell activity and even speed healing after surgery. For cancer patients, putting pen to paper — or fingers to keyboard — can ease the miseries of treatment. In a 2014 study from the University of Texas, patients with kidney cancer were asked to either to write about neutral topics or share their deepest feelings about their cancer. Those who expressed their feelings in writing felt a reduction in their cancer symptoms. A 2008 study by Georgetown University researchers showed patients with leukemia and lymphoma felt much better after treatments if they engaged in expressive writing immediately before. 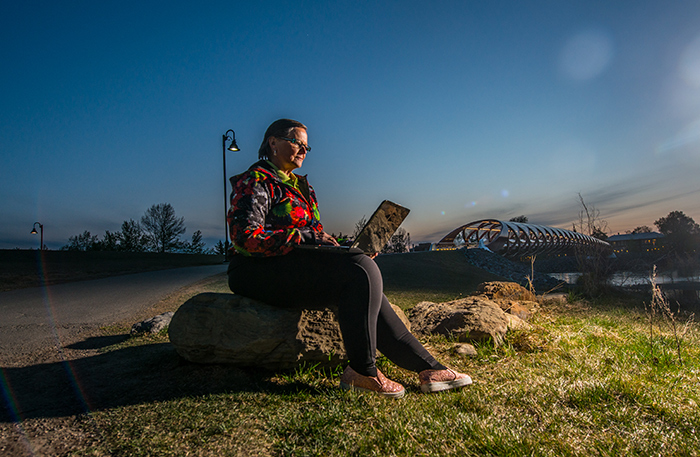 Of course, many people – Eckersley included – don’t want to write just for themselves. The good news is that sharing writing publicly may have some specific health benefits. A 2013 study of troubled youth by researchers at the University of Haifa, in Israel, found that blogging was more effective than journalling for boosting self-esteem and lessening social anxiety.

But it’s not always easy to put yourself out there. For Eckersley, it was a bit nerve-wracking to post her first blog entry. “I think I put up the first one at 3 a.m. and just let it go,” she says. “But I found it really cathartic to type it and put it out there. It made it all less scary.”

Eckersley’s initial worries about privacy faded as she went through treatment. Now, she was encountering an endless stream of doctors and nurses who knew all about her. After a while, she stopped feeling self-conscious about exposing her chest in an exam room – or sharing her experience online. “You think your life is private until you get cancer,” she says.

Like Eckersley, Mike Lang went online for support after being diagnosed with Hodgkin’s lymphoma a few years ago. At the time, he was an avid outdoorsman who worked as a ski patroller and led adventure trips with his wife, Bonnie. He was also only 25. Baffled by the diagnosis, Mike went online to find other young cancer patients: “I just really wanted to talk to someone my own age,” he says.

At the time there weren’t any online support groups for young adults with cancer. Fortunately, Mike was connected to seven other survivors his age through an organization called Young Adult Cancer Canada, which he found while surfing the web. The peer support helped Mike get through treatment, so when he and his wife decided to organize an adventure trip for survivors, they invited his online friends.

In his words, the trip “was me trying to figure out what the hell happened.” Since diagnosis, he’d become increasingly bitter and angry, and needed to find a way to reconnect with the positive person he’d been before. So he and Bonnie organized an eight-day kayaking trip along Oregon’s Owyhee River, similar to the trips they’d organized for at-risk youth before the diagnosis.

While preparing for the trip, Mike spoke with the other survivors coming along and was amazed by what they told him: “I thought, man, these stories are incredible – we should share them somehow.” Though he had no experience with film, Mike decided to capture footage from the trip and make a documentary about cancer survivorship: Wrong Way to Hope: An Inspiring Story of Young Adults and Cancer. The film earned the CIBC Hope Award in 2011 and has been screened more than 300 times in seven countries. It also led Mike to produce two more films about cancer survivorship: Ebb and Flow: Storytelling for Cancer Survivors and The Valleys. “It’s my favourite thing to do,” he says.

Since then, Mike and Bonnie have continued to organize adventure tours for young cancer survivors through their company, Survive and Thrive Cancer Programs. Many of their clients reach out to them online.

On top of this, Mike has spent the last couple of years working towards a master’s degree in health services research. For his thesis project, he studied the effectiveness of an online chat group called Cancer Chat Canada, which runs weekly discussions guided by a professional facilitator. Mike’s work found that the online program had many of the same benefits as a face-to-face group – decreasing anxiety and loneliness, in particular.

While the online realm has been a supporting player in both Mike’s cancer journey and resulting career shift, he sees its limitations. “This medium is a double-edged sword. There’s all this potential for positive things, and the potential for negative things too,” he says. Case in point: online discussion boards, which can contain bad information or trolls.

And when it comes to privacy, Mike thinks young survivors should consider the risks – particularly, the potential harm to future employment opportunities. He recommends using support groups that allow users to be anonymous, like Cancer Chat Canada (cancerchatcanada.ca). Bloggers can use a service called Caring Bridge, which allows people with health issues to blog about their health journeys, without worrying about it being read by anyone other than their loved ones.

Many of us assume no one will be interested in our tiny corner of cyberspace – in fact, that’s what the couple assumed when Bonnie started a blog to keep friends and family updated about Mike’s treatment. “We didn’t think anyone but our families would read the blog,” he says. “We were surprised over the years that all of a sudden there were thousands of people reading it.”

Tweeting Until The End 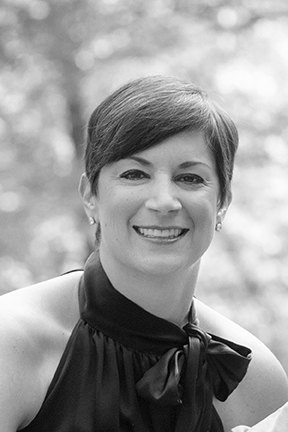 Until a few weeks before her death, Lisa Bonchek Adams tweeted about flowers, living life to the fullest and the details of her terminal breast cancer. She had more than 15,000 followers and had tweeted 176,000 times when she died at 45.

Since starting her Twitter account in 2009, the American mother of three shared the intimate details of her life with cancer, including her medical treatments, prognoses, thoughts on life and dying, and preparing her children for her death.

Her candour attracted plenty of fans, but it didn’t sit well with two newspaper journalists — Emma Gilbey Keller and Bill Keller — who questioned her choice to share her dying days so publicly. “Should there be boundaries in this kind of experience?”asked Emma in The Guardian, in 2014. “Is there such a thing as TMI? Are her tweets a grim equivalent of deathbed selfies, one step further than funeral selfies?”

Social media has an indelible effect on public conversations around health care, says University of Alberta health law professor Timothy Caulfield: “It’s changed how people talk about illness, how health information is disseminated, and I think it’s having an impact on health policy debates.”

More patients like Adams are sharing their stories online — but also fundraising for treatments and reaching out to one another. But there are plenty of downsides, says Caulfield. Some patients are going online to crowdsource their diagnoses or find others who share their misguided ideas about health (case in point: the anti-vaccination movement).

While the ethics of dying online are murky, there may be legal risks associated with social media storytelling, says Caulfield: “Any time you tweet about other people, there could be a danger of crossing a line and talking about people inappropriately,” he says. “In the extreme, that could raise legal issues.”

But what worries him more is how other patients perceive the stories they find. Some may think treatments are more effective than they really are, based on a few patients’ experiences, for instance. “People should remember these are stories and anecdotes,” says Caulfield. “They can still be very powerful and useful, but they should consider them one person’s experiences.”

And anyone — whether they’re tweeting on their deathbed or blogging about Daffodil Days – should exercise common sense before they post anything online. “If you’re considering doing it, remember that once it’s out there, it’s out there. And consider how it might be useful to others.”