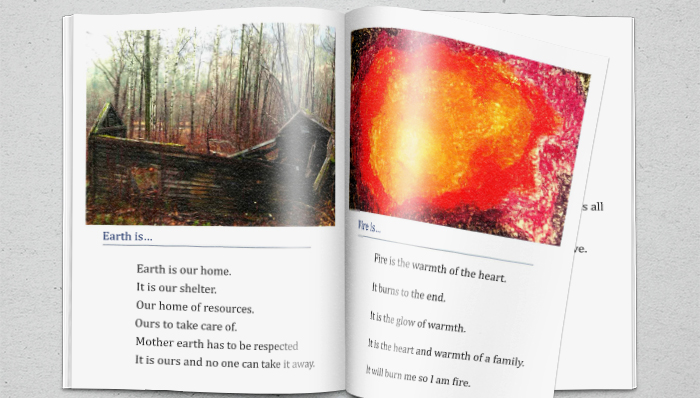 After their Great-Aunt Ruth was diagnosed with pancreatic cancer, Michael and John Brown wanted to do something to make a difference. Michael, who is nine years old, decided writing a book that they could sell to raise money and awareness surrounding pancreatic cancer research would be the ticket. So he put the words together, while his 12-year-old brother John gathered the art for the book.

They ended up creating Poems of the Spiritual World, a collection of Michael’s poems and John’s images of nature. The poetry is mostly about Michael’s experiences in the natural world, including time in nature and family memories. For example, in his poem “Fire is…,” Michael writes: “Fire is the warmth of the heart./It burns until the end.” The art that John gathered is mostly environmental, as well.

The brothers began selling the books to neighbours and classmates around Christmas 2014. “People think it’s so good,” says John. “I was surprised that we raised so much money.” The first run of books sold out and the brothers have raised more than $2,700 in total.

“It was definitely John and Michael’s initiative,” says their mother, Catherine Bell. Some of that support came from their schoolmates, who spread the word around their school. “It felt really good because it’s for the Alberta Cancer Foundation, and for people to know that we should start doing more research for pancreatic cancer,” says Michael.

Recently, the family learned that their great-aunt’s pancreatic cancer is now in full metabolic remission. “She was really thrilled with the outpouring of love and support from Michael, John and so many other people,” says Catherine.

Congratulations are in order