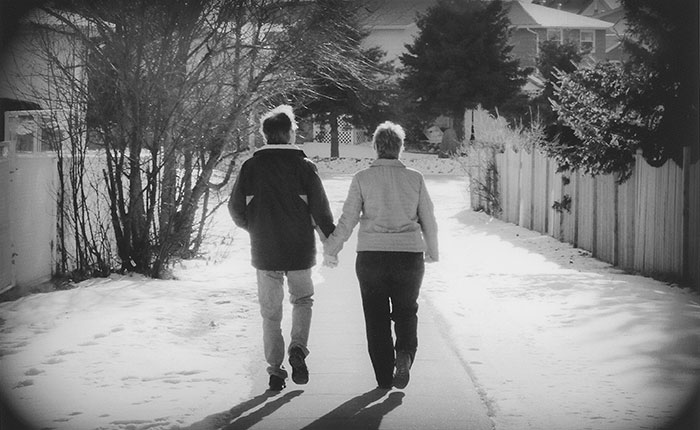 Soul mates: Married since 1982, Tammy and Geoff Wegrich say financial difficulties and a series of health problems, including a cancer diagnosis for each of them, have only made their love stronger.
Photograph by Jenn Haig

Tammy Wegrich was preparing for her daughter Courtney’s wedding in July 2011, making decorations for the hall, sewing, and designing tables, “helping out with all the things moms do when their daughters are getting married,” she says. She took a break for a regular doctor’s appointment and opted to undergo one of the unpleasant aspects of the physical – providing a stool sample. That simple test saved her life. Though she exhibited no symptoms, the sample came back positive and a colonoscopy that November revealed she had stage three colon cancer. In two weeks she was having surgery. “It was really quick – within a couple weeks it was like ‘Boom! This is what you’ve got,’” she says. “Then boom! Surgery. Boom! Chemo.”

“We took the biggest sigh of relief because we knew she was going to help and we weren’t going to have to struggle,” Tammy Wegrich says.

She punctuates the timeline of her cancer diagnosis with such emphasis because it was an explosive time for the Wegrich family. On the more sanguine side of life, Courtney got married, but Tammy’s husband Geoff was in the clutches of some devastating health problems, himself. On St. Patrick’s Day of 2009, Geoff had gall bladder surgery. Then, on December 30, 2009, on their 27th wedding anniversary, he had surgery on his lymph nodes, to definitively rule out tuberculosis – which also confirmed the suspected leukemia hinted at from previous blood work. Then, in 2010, he had an angiogram that found he needed triple-bypass open heart surgery. This was followed by two colonoscopies, having a basal cell carcinoma removed, and a splenectomy. His spleen was so enlarged because they had held off on the surgery during Tammy’s chemo treatment, that when it was removed, it weighed four pounds, says Tammy. “We called it Doug,” she says.

All told, Geoff had six surgeries in just as many years. His children joked that he had so many scars on his body he ought to get a vertical-running tattoo of the top of a zipper, to give the impression he could come together or apart with just a tug.

Geoff and Tammy were married in 1982, she at 23 and he at 30, after meeting through friends and living together for two years. They were married in the living room of a justice of the peace, and while Tammy admits it wasn’t the most Disney-like of beginnings, they didn’t need pomp and ceremony to demonstrate their love for one another. It was transparent, and still is, she says. “We love each other madly and we’re supportive of each other no matter what we’re going through.” Above their bed they have a printout of the lyrics to All About our Love, a cut from English soft-rock singer Sade’s “Lovers Rock” album.

Geoff began driving a bus for the City of Edmonton in 1975, when he was just 23; 2015 marks his 40th year. “I love interacting with the people,” he says. “With my seniority I had the choice of any shift, so I always started at 4:30 in the morning.” But Geoff’s last day of work was when he discovered he needed open heart surgery, in 2010. For the longest time, he missed the job, he says, adding “but I’m in a good place now.” On long-term disability, he’s still an employee receiving a pay cheque, though he’s unsure if he can ever return to work. He still has shortness of breath; his health is “up in the air,” Tammy says. His white blood cell numbers tend to creep back perennially, and he’ll show symptoms like bruising and sweats. His numbers are just far enough below the maximum cell count, however, to put them in the “normal” range, so technically he’s in remission. “They were hoping he might get five years of remission, if he was lucky,” says Tammy. “We just take every day as it comes.”

Tammy and Geoff have three grown children, the youngest of whom is now 26, plus three grandchildren and a fourth on the way in July. Throughout her kids’ childhood, Tammy was an “off-and-on stay-at-home mom,” running a daycare at home for six years as a young mother and later working with Sobeys for seven years. With both of them tackling a cancer diagnosis at the same time, they feared that their children would worry about them too much, that they couldn’t be there to provide their children with the mental support they’d need. “When you’ve got kids and grandkids and you don’t know what the future holds, the uncertainty is pretty scary,” says Geoff.

The doctors scheduled the couple’s chemotherapy so they could support each other as much as possible. But the financial burden grew. Each trip to the Cross Cancer Institute from their home in Morinville added 85 kilometres to the odometer, parking four times each treatment week wasn’t cheap and the cost of prescriptions were through the roof. Though their chemotherapy was covered, Tammy and Geoff had to pay out-of-pocket for some of the cost of the drugs that relieve the chemo’s side effects. A generic anti-nausea drug cost around $400, and one fill wasn’t enough. Without any savings to fall back on, they quickly exhausted Tammy’s RRSPs from her time at Sobeys. As the financial and emotional toll of two cancer trials accumulated, “Life almost stopped, it seemed,” says Geoff. 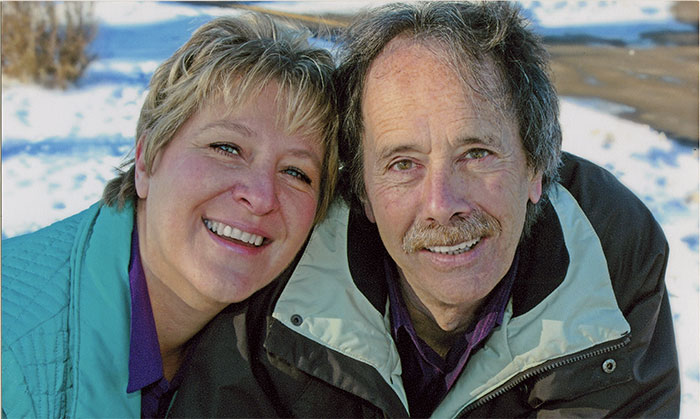 After Tammy’s diagnosis and surgery for colon cancer in 2011, Geoff and Tammy attended a class that prepares patients and their families for the intricacies of living through chemotherapy treatments. While attending that class in early 2012, they were put in touch with Teresa Skarlicki, a social worker with the Cross Cancer Institute who, as a liaison, also administers the Patient Financial Assistance Program (PFAP), designed to help cancer patients to deal with the extra financial burdens of a cancer diagnosis. “I think everybody wishes they could shoulder the burden without asking for help, but I felt like it was more of a burden that we could deal with at the time,” Tammy says. Skarlicki immediately started working with the Wegrichs to help them cover expenses. “We took the biggest sigh of relief because we knew she was going to help and we weren’t going to have to struggle,” Tammy adds. “Teresa was extremely warm, compassionate and understanding – all the things you hope for when you reach out for help.”

Skarlicki began her professional life in medicine, but not as a social worker. She started as a lab tech, and while she enjoyed the medical atmosphere she preferred interaction with humans rather than equipment. She wanted a change of career and, by 1995, was working with seniors in geriatric programs and home care. In 2002, she joined the Cross Cancer Institute and with the exception of a few months off in 2009, has been there since. “It’s really a privilege to journey with people through such a difficult and vulnerable time in their lives, and to be able to make a difference,” she says.

PFAP helps patients with a demonstrated financial need with the unexpected financial costs that arise as a result of cancer. After an investigation of a patient’s financial situation, the program can cover the cost of travel, parking, medications and sometimes food or monthly expenses. Income replacement is not its mandate, though it aims to be as comprehensive as possible. Payments work through either reimbursement or direct billing from the vendors, like pharmacies or hotels; Tammy says that they paid for their parking and sent Skarlicki their receipts, but when it came to their prescriptions they never saw a bill. Skarlicki says that direct billing is essential for some patients who can’t cover up-front costs. “It’s hard to realize that some people are running at a deficit, and so they’ve had to say, ‘I’m sorry – I know I’m having chemo but I cannot buy that drug because I don’t have $20. I don’t know what I’m going to do.’ ”

Skarlicki says that often patients find it more difficult to deal with the financial aspects of cancer treatment than the medical aspects. She describes seeing patients whose body language makes evident that they’re stretched beyond their capacity to cope, and it’s not for their health but for their bank accounts. “If you can give them a little bit of help, a lot of that stress melts away and they can go forward and focus on trying to make it through cancer, because it takes all of your internal resources to make it through treatment,” she says. “I’ve personally journeyed with people who didn’t have to worry about their finances, but I saw the toll [cancer] took on their lives emotionally, physically, psychologically and spiritually.” Couples are usually loath to discuss finances even in good health; when anxiety of a cancer diagnosis is looming, the stress is compounded. When the anxiety of a cancer diagnosis is looming, the stress is compounded. With Skarlicki’s help, “we could concentrate on getting better,” says Geoff.

Today, Tammy gets her blood work done every three months and is doing great. And though his numbers tend to creep back into risky territory, Geoff is happy to be in remission. “It’s been a long road for the last six years, but between him and me there’s light at the end of the tunnel,” Tammy says.

Skarlicki uses the word “journeying” to describe her task as a social worker. “It has a beginning, middle and end, and once we start on this trajectory it really takes the patient through a wide spectrum of emotions,” she says. “There’s the feeling of shock, loss, fear and anger, and then the Cross becomes a safe place of nurturing, and then they’re let go, back into their community, and it’s both scary and a relief at the same time. You’re never the same person after such a life-changing experience.”

But for Geoff and Tammy, there is consistency. “It’s all about our love, so shall it be forever, never ending,” read the lyrics above their bed. And what seems like the end of the story is really just a new beginning for the couple, now married for 33 years and still best friends. “We’ve seen some suffering … we know whatever may come, we can get through it as if it’s just begun,” the song continues.