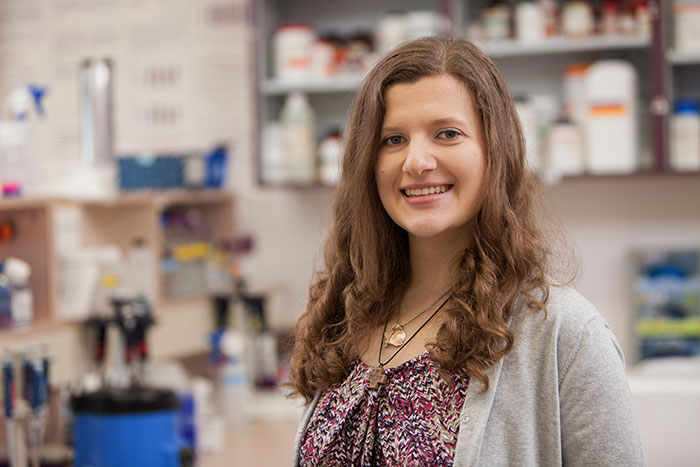 QUICK STUDY: Cyril M. Kay studentship recipient Anna Kovalchuk inherited her keen interest in research and oncology from her
parents, who are both university professors.
Photo courtesy the University of Lethbridge

With two neuroscientists as parents, Anna Kovalchuk did not have to think long or hard about her own career path.

“I am personally very grateful that the Alberta Cancer Foundation created this award – all of these people are going to make wonderful contributions to the fight against cancer,” says Dr. Cyril M. Kay.

The daughter of Drs. Olga and Igor Kovalchuk, respected neuroscience researchers and professors in their own right at the University of Lethbridge, Anna comes by her love of science and cancer research honestly. (Ukraine-born Olga was featured in the summer 2010 issue of Leap, for her work studying Chernobyl and radiation).“I have been exposed to quite a lot of cancer research and have heard my mom talking about her work. I was also exposed to a lot of other supervisors who were interested in this. It just made me believe that this is what I would like to do,” says Anna, who is working under Dr. Bryan Kolb at the U of L for her master’s project, which examines the effects of chemotherapy on the brains of mice.

Now it’s the 23-year-old’s time to take the spotlight, as the 2014 Cyril Kay studentship recipient. Established in 2003, the studentship created in Dr. Cyril M. Kay’s name via the Alberta Cancer Foundation has long been given to top graduate students with bright futures in cancer research.

“These are exceptional students who are interested in medical research, in this case related to cancer,” says Kay, who helped establish the Alberta Cancer Board and is a Professor Emeritus of biochemistry at the University of Alberta. “The projects run through the entire continuum of cancer research, all the way from studying molecular mechanisms to prevention, detection and diagnosis, treatment and palliation. They are judged by an expert panel, and these are the number one students.”

Anna says her work on the $55,000 studentship, which she began in May 2014, is a continuation of her previous studies under Kolb, as an undergraduate, on the effects of radiation on mice. “It seemed like the logical step to take next,” she explains.

Her findings have already shown gains. “We wanted to see what effects mice would experience after being treated with these two chemotherapy agents. One of them (MMC, or Mitomycin C) led to sex and brain-region specific changes in the gene expression of these mice. We were looking at the hippocampus and their pre-frontal cortexes and we are seeing that there were differences between the two drugs and there were also differences between the sexes as to what was going on at the molecular level.”

Anna says she hopes her work will help us understand why people show negative side effects from chemotherapy. “We wanted to see what kind of genes are being expressed and what pathways they belong to, so that when we see what’s going on at that level we can understand what’s going on with the ‘chemo brain phenomenon’ and why people are experiencing deficits in attention. With this understanding, we will be able to prevent people from having these post-chemotherapy effects.”

After completing her master’s degree, Anna hopes to follow in her folks’ footsteps with a PhD from the U of L, which she hopes to complement with a medical degree from the University of Calgary. “It’s close to home and it’s a nice research university,” she explains. In the meantime, she will use the $1,500 stipend from her award to attend a conference in New Orleans, and complete her master’s, of course.

The importance of the award, and having it in his name, is not lost on Kay. “Very often grants are not easy to get, and it’s important to have this kind of money for support,” he says. “This is the next generation of researchers. I am personally very grateful that the Alberta Cancer Foundation created this award – all of these people are going to make wonderful contributions to the fight against cancer.”

A Better Way to See Tumours