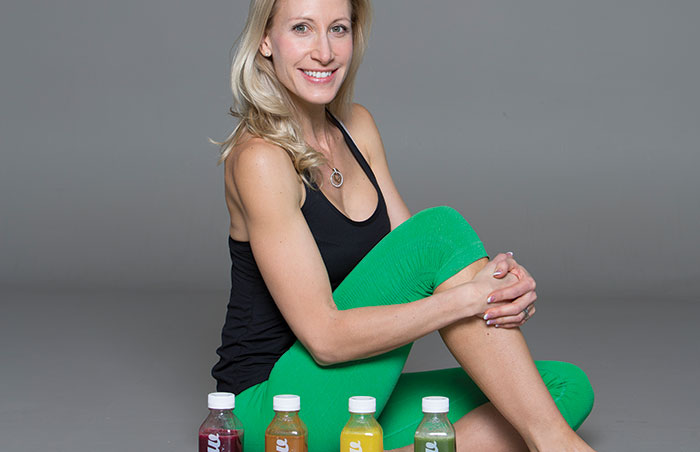 When Marnie Ashcroft first set foot in the Edmonton EXPO Centre at Northlands during the 2014 Bust a Move for Breast Health fundraiser, she was blown away with what she saw. Ashcroft, the founder of a chain of juice bars located across Edmonton (and one soon to open in Kelowna, B.C.), says she was inspired by the “levels of engagement Bust a Move attracts from corporate sponsors and individuals. It’s a really amazing awareness opportunity, and it’s something that we want to be a part of,” she says. “It’s in alignment with many parts of the Glow vision and values.”

“I thought, if juice could have that impact on someone in a critical care situation, what could it do for the average person?” says Marnie Ashcroft. “I want people to think of it as a tool in a tool kit.”

This year, she knew that she wanted to up Glow’s participation level in the event. The company has registered a team of 16 participants, and they hope to raise between $16,000 and $20,000 in donations for the event. They’ll also be working with various instructors and vendors to provide juice and support, during the fundraiser.

Glow Juicery offers a variety of juicing options for clients that want everything from a quick pick-me-up to a full juice cleanse experience. There are three levels of juice cleanses offered through the business, from a beginner’s pack to a regular monthly option that delivers juicing options to a customer’s front door. The company was founded in 2012 under the auspices of “food is medicine.” Ashcroft was inspired by Kris Carr, an American author and wellness activist who made a documentary called Crazy Sexy Cancer after being diagnosed with stage four liver cancer in in 2003, at the age of 31. Karr has gone on to write various books about her cancer experience, and is an advocate for clean eating and a healthy diet.

“I thought, if juice could have that impact on someone in a critical care situation, what could it do for the average person?” says Ashcroft. “I want people to think of it as a tool in a tool kit.”

When she started the company, Ashcroft’s goal was to,“shake up the food landscape a bit and create a way for people to connect with raw nutrition.” The response has been incredible. Glow Juicery now has locations across Alberta and has partnered with 13 other businesses which sell their juice in-house. “We have people coming in and saying they have felt a real impact on their life. There are moments when I’m brought to tears, it keeps me going and really excited,” says Ashcroft.

In 2014, Glow Juicery was a vendor at Bust a Move, and they donated juice to all the volunteers at the day-long event. But Ashcroft made a note that for this year, she wanted to show up, “in a big way. Part of what support looks like is getting people excited about it beforehand, through marketing and social media engagement and attending the different events leading up to it,” she says. “I’m one of those people who just wants everyone to come and party, and we do everything we can to share our excitement about that.” She says the company feels a strong tie the fundraiser because of its overall focus and spirit. “It’s fitness-focused. We believe that a combination of nutrition and fitness are critical to health.”