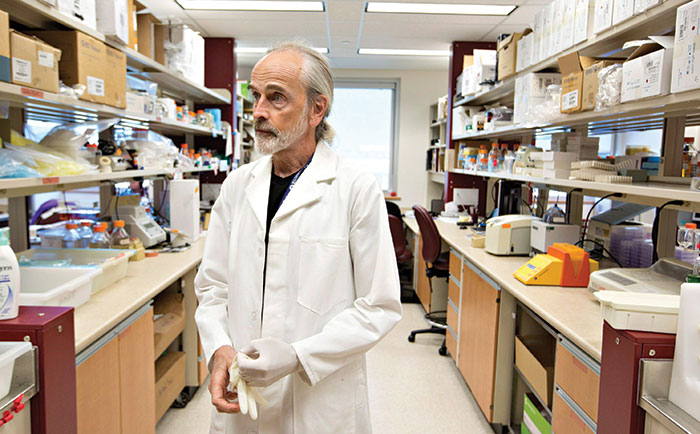 After Powel Crosley’s wife Sladjana died of a rare form of ovarian cancer, he went back to school. Now 61 years old, Powel is enrolled as an undergraduate student at the University of Alberta, where he has taken introductory classes in biochemistry and oncology. He recently assembled a research team, now funded by a grant from the Women and Children’s Health Research Institute (WCHRI), to study granulosa cell tumour (GCT) of the ovary, and Powel will spend the next two years working alongside academics and researchers as they investigate novel treatments for GCT, which accounts for about five per cent of ovarian cancer cases.

“We are close to finishing our first set of experiments that investigate the basic question of whether these small-molecule drugs we are testing work to reduce viability of GCT, and if they work more effectively when combined,” he says. The team is also attempting to coordinate with local clinicians to receive patient tissue to include in their research. “As a rare cancer, there are probably only two or three new cases of GCT every year in Edmonton, so getting access to samples is challenging.”

Powel works with photos of his wife on his computer, and he says he has found the process of going back to school challenging and enlightening. “Even after several years of undergraduate coursework to build up my knowledge, the complexity of cancer, in general, and the variety of experiments that need to be done to confidently draw conclusions puts a heavy load on my intellect,” says Powel, who already holds a several degrees in geography. “The enlightenment comes from seeing first-hand all of the work, most of it unpublicised, the repetition of experiments, regardless of whether they succeed or fail, and the commitment and camaraderie of those who are doing the research. I would be totally without hope if I did not have my fellow lab mates, and technicians to help sort me out when I have questions.”

In the face of challenge, Powel says he remains motivated by Sladjana, who was a scientist and who believed that the “answer to this pernicious disease was in the lab.” In 2004, she created the Granulosa Cell Tumour Research Foundation to fund research. “My effort to try and find a potential solution now, is my way of keeping her hope and legacy alive,” Powel says. “That goes along with the fact that if she were here now, she would be thrilled to be in the lab, herself, and I know she would be much better at it than I am!”