While vacationing in Puerto Vallarta, Mexico, in December 2007, Colin Hackett wouldn’t go to the pool because he didn’t want to take his shirt off. He was staying at a resort with his wife, Kim, trying to enjoy some well-deserved respite from teaching high school in Edmonton, but he was preoccupied with his weight, which had climbed since his college football days. He made a New Year’s resolution to join a fitness group and he started training as soon as he got home. He joined a boot camp and a men’s hockey league weighing 324 pounds. By 2010, he had dropped almost 40 pounds, and by November 2013, he was down to a healthy 250.

“The plan was to write a book about going from being a fat guy to being at the Ironman World Championship in Hawaii,” Hackett says. But on November 10, 2014, the plan changed, and suddenly the blog was about more than just his weight loss.

Hackett says he “fell into” competitive triathlons. This isn’t a metaphor – an ankle injury from a fall during a hockey game compelled him to take up swimming. Already a runner, he figured he was two-thirds of the way there. By June 2013, three months after completing Ironman Los Cabos in Mexico, he was writing a blog documenting his triathlons and his weight loss, called Trials of a Big Triathlete, with the self-deprecating address of trifattytri.blogspot.ca. Five months later, he raced in Ironman Arizona.

For the uninitiated, Ironman competitions consist of a four-kilometre swim, a 180-kilometre bike ride and a 42-kilometre run. It’s a gruelling feat of endurance, and it wrings its participants through the kind of physical agony typically reserved for famine, combat or pandemics. For many, completing that first Ironman means getting the iconic red Ironman logo tattooed on you the next day. Luckily you don’t need one for every race you finish thereafter, because Hackett would be pockmarked like the hood of a stock car. He’s finished seven Ironmans to date, at just 33 years old.

“The plan was to write a book about going from being a fat guy to being at the Ironman World Championship in Hawaii,” Hackett says. But on November 10, 2014, the plan changed, and suddenly the blog was about more than just his weight loss. On New Year’s Eve 2014, exactly seven years since the resolution that turned his life around, Hackett started his first round of chemotherapy. He had stage four colorectal cancer, and it was incurable.

At 4 a.m. on November 6, 2014, Hackett was complaining about bad gas. After a trip to emergency at the Sturgeon Community Hospital, he went home, only to return later for a CT scan that found his bowels were blocked. The doctor gave him morphine and he stayed the night. The next morning, he was transferred to another hospital, where they tried to open his colon with a stent. When the procedure failed, an ambulance took him back to the Sturgeon for bowel surgery. He awoke to find he’d had a colon resection and they had biopsied a spot on his liver. He had a tube in one nostril and two in the other. The biopsy results came in.

[easyrotator]erc_29_1424795432[/easyrotator]
MOVING AHEAD: Doctors say exercise helps people who are undergoing chemotherapy, like Colin Hackett, do better than those who are not active throughout their treatment.
Photos by Cooper & O’Hara

It was debilitating. “I was 10 days away from doing my eighth Ironman,” Hackett says. “I was still training 100 per cent and I had this huge, stage four tumour going.” His youngest daughter was just two weeks old. His oldest was five years old.

Hackett already had a bit of a history with cancer. During Ironman Canada in 2010, he met the Cops for Cancer triathlon team, a fundraising group for cancer research, and he joined in 2011. He started fundraising at the high school he worked at then, Centre High. “It seemed like a really great place to focus my efforts,” he says. “I lost my grandfather to prostate cancer when I was seven years old. He didn’t get to see me grow up and play football.”

Hackett’s also a dedicated ambassador for the Alberta Cancer Foundation, having raised money through more than one triathlon for the foundation, and he is signed up for the Enbridge Ride to Conquer Cancer and was a volunteer ref in the Word’s Longest Hockey Game.

When I first spoke to him, Hackett was a few days away from his initial consultation at the Cross Cancer Institute. “I feel fantastic, honestly,” he said. Over the phone, he communicated enthusiasm and confidence. Already concerned about his diet, he didn’t need a drastic overhaul to his lifestyle. He wanted to train right through his treatment; he was planning for Ironman Coeur d’Alene in June.

Hackett is on an aggressive form of chemotherapy, a regimen called FOLIRI, whose name represents three different drugs. His oncologist, Dr. Michael Sawyer, combines the regimen with a relatively new drug called bevacizumab that attacks the growth of new blood vessels. Hackett tolerates it well. “He told me he biked 20 or 30 kilometres the day before I saw him,” Sawyer says. He also ran a five-kilometre race just four hours after he finished his first round of chemotherapy.

The exercise might have something to do with it. “There are many studies, both in curative chemotherapy (to remove cancer completely) and chemotherapy to prolong people’s lives, where it appears that people who exercise do better than people who do not,” says Sawyer. And there are “hints” that exercise can decrease naturally occurring hormones and chemicals in our body that the cancer uses for its own benefits, he says. It’s not immediately evident why exercise can have these benefits, but it at least appears that it does. And Hackett thrives on this fact.

Meanwhile, the median survival of colon cancer patients increases with each passing year, thanks mainly to new and stronger drugs. “When I was a medical student, the expected survival was somewhere between six and nine months,” Sawyer says. Two or three years ago, the median survival for patients was about two years; today it’s pushing 30 months. Sawyer makes no qualms about saying Hackett will have cancer for the rest of his life, but he also can’t help but highlight all the reasons why Hackett shouldn’t slow down.

Speaking to Hackett again, I ask how his consultation went. “It wasn’t great news,” he responds. “But the oncologist stressed that we don’t know how these things work – you don’t have a stamp on your foot that says when your time is up.” 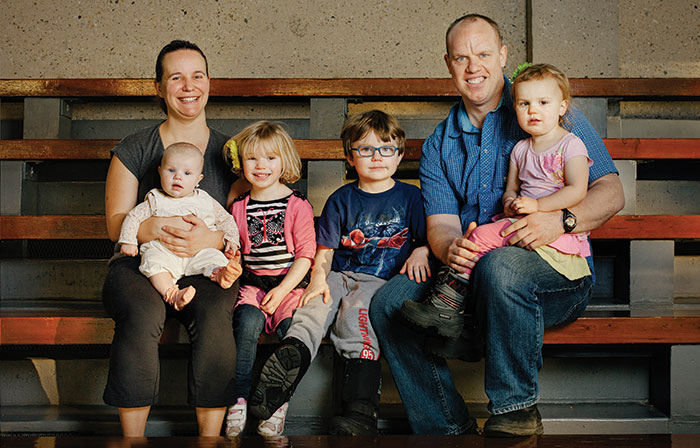 FAMILY FIRST: When not training for his next triathlon, Colin Hackett is making the most of his time by spending as much time as he can with his wife, Kim, and their four children.
Photo by Cooper & O’Hara

He’s grateful that, because he’s young, he can take full doses rather than half-doses. And he’s already excited about returning to work as a teacher. “It’s who I am and how I make a difference in this world,” he says. “I don’t think there’s an hour that goes by that I don’t think about the cancer, but being off work is the worst thing for me. It’s a constant reminder that it’s not me anymore.” He quotes Stuart Scott, the late ESPN anchor who died after his third bout with cancer – just two days prior to our conversation. “He said that you don’t lose to cancer by dying; you defeat cancer by living.”

Kim, however, worries for the father of her four children, the man with whom she travelled on their journey to good health, only to arrive somewhere entirely foreign. When he was first diagnosed, “my world came crumbling in around me,” she says. “I’ve just had to rebuild it from there.”

She wants to be there for her husband in every capacity, keeping him well enough to maintain his health and willpower. “I wouldn’t have picked this for myself,” she says. “But there are people out there who try for years and can’t have a baby, and that’s what they want more than anything. And there are people who spend their whole lives looking for their knight in shining armour. And I’ve got all that.” She is now going back to university – besides the two degrees she already has, she’s pursuing an education degree so she can have a schedule closer to her children’s.

As it turned out, Hackett’s fundraising efforts meant a sizeable karmic deposit was waiting for him when he needed it. Brett Babkirk, who has refereed hockey with Hackett for 15 years, imagined a fundraiser for Hackett while on a trip to a hockey game in Camrose. With the help of his wife, he brought together more than 300 people at the Polish Veterans Hall in Edmonton for an auction and entertainment, where he raised more than $21,000.

Hackett is training every day, spending time with his family and updating his blog. A recent post reads, “Cancer. There, I said it. This seems to be one of the most powerful words in the English language.”

And before we finish our conversation, he says, “If people talked about the fact that they have cancer, we’d all know more survivors,” he says. “If everybody talked about it, we could see how many people have done so well for so long. Nobody knows these amazing survivor stories that are out there.”

When the Diagnosis Isn’t Good

Tamara Gignac is a Calgary reporter who was diagnosed withstage four colorectal cancer in June 2014. She wrote this moving account of her diagnosis, which we’re reprinting here in full.

I was 40 when I learnt I had cancer. The diagnosis was devastating: I had between six months and a year to live. But today, I choose to live like I will live on, beyond that. Yet if I no longer have an uncountable number of days ahead, then I choose to make the most of every tiny moment. The small, the everyday and the moments we all take for granted that I no longer can.

It’s the day I walk my son to his first day at kindergarten, the sound of my little girl’s voice in her Christmas pageant. It is the soft smell of my children’s breath as they jump into my arms, skin gentle and sweet after their bath. It’s the crunch of snow under my boots, the sunshine on my shoulders and the sand beneath my toes. It’s decorating the Christmas tree and wrapping toys with the hope of another year. It is learning how to love fiercely, live honestly and never let go.

Living with cancer makes every minute and every moment meaningful. That is what I live for – more moments.

Help create more moments for people like Tamara by investing in the Alberta Cancer Foundation. 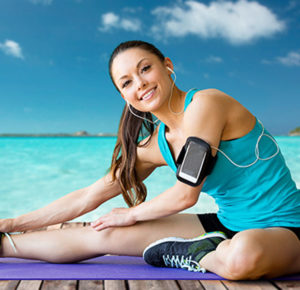 Ask the Expert: Knowledge is Power