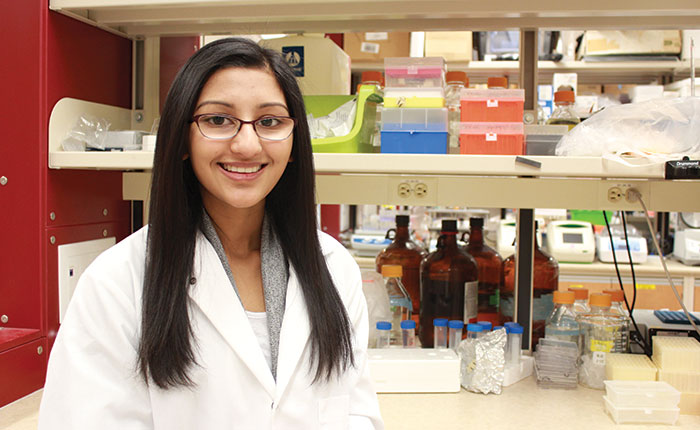 CELL SHOCKER: U of A undergrad Asha Lal spent last summer studying how lung cancer cells react to the reovirus.

It might contradict a stereotype of university student behaviour but science undergrad Asha Lal prefers to spend her free time toiling away in the lab than, well, pretty much anything else.

“Trying to manoeuvre my life around the nature of the project, that was a really good challenge,” says Asha Lal.

So when the opportunity for the 2014 Mark Ariss Summer Studentship came up, working alongside mentor Dr. Maya Shmulevitz, assistant professor in medical microbiology and immunology at the University of Alberta, the second-year psych major jumped at it. No stranger to beating out fierce competition, Lal had previously sported a white coat as a Grade 11 student under Shmulevitz, as part of the Heritage Youth Researcher Summer Program, funded in part by the Alberta Cancer Foundation.

Selected from hundreds of applicants for a HYRS studentship in 2012, Lal took that challenge in stride. And Shmulevitz, who’s also the chair in molecular virology and oncotherapy, couldn’t be more pleased with the young researcher’s efforts and attitude – both then and now. “In the lab, she’s very mature,” says Shmulevitz. “As a human she’s very thoughtful, she’s quite smart and capable, yet she’s very thankful for others, so she’s humble, which allowed her to learn a lot. Every opportunity that came up, Asha was very interested in discussing it and learning. She also takes advice very well.”

In terms of experiments, Lal’s ambitions, like her work ethic, are well beyond her years. “It’s really hard to get summer studentships in your first year,” says Shmulevitz. “There’s so much competition, so it’s quite a statement that she got it.”

She’s proven her worth with an incredibly strong commitment to her project’s focus: the reovirus as a potential attacker of cancer cells, which Shmulevitz admits surpasses the average undergrad’s scope or skill. “Asha’s project was to try to start looking at cancer cells that let the virus grow really well and cancer cells that didn’t,” she explains. “She started to look at the details of what the virus does, and she found that there are certain steps of the virus replication cycle that are stopped in cancer cells that are not permissive. The idea is that, if we can understand that better, we may be able to predict which cancers might be better or worse for therapy and be able to manipulate that virus to overcome it. She was really dedicated to it.”

Far from a nine-to-five job, Lal’s four-month studentship last summer (made possible through targeted funding from donor Mark Ariss via the Alberta Cancer Foundation) often saw her toiling into the wee hours studying and logging data. “The virus I was working with has a 24-hour replication cycle, so sometimes I would have to stay until midnight doing 12-hour time frames. Trying to manoeuvre my life around the nature of the project, that was a really good challenge,” says Lal.

Ariss, a geologist by trade who volunteers at the Alberta Children’s Hospital, says he’s delighted Lal was the first to receive his namesake endowment after witnessing her diligence in Shmulevitz’s lab. The stipulation with his donation, which will support summer students like Lal for five summers, was that it fund pediatric oncology study. “I was looking for something to do with pediatric cancer and this specific research project came up, so the money was earmarked for Asha to look at the reovirus,” says Ariss, who has two older children of his own. “It seemed to be a nice fit. Working with kids at the hospital, I see a potential need there, and this certainly could have very good ramifications for the general public if they do find something that can use viruses to attack the cancer cells.”

The once-in-a-lifetime experience was not lost on Lal, who’s considering both a medical degree and a doctorate. “Especially working with students at such a high level, it pushes you to do your best. I think that’s so important for students to not wait until they are doing a master’s degree to learn how to properly execute a research project. These are skills that I can apply to my everyday life.”

Watt Can You Do? 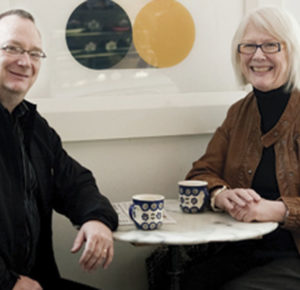