Ask Dr. Gregory Cairncross what motto he lives by and he doesn’t really have an answer.

But chat with the passionate, world-renowned brain cancer researcher for a bit and it’s apparent he has honed the fine art of appreciating the little things in life. After toiling in a relatively dismal area of oncology for about four decades, his outlook is, no doubt, good medicine for this doctor.

“I’ve dealt with many disappointments and failures, but I get satisfaction out of the little successes, in the minor victories, not in the big victories because they are so rare,” says the director of the Southern Alberta Cancer Research Institute and University of Calgary researcher.

It also helps that Cairncross divides his time between clinical practice and research, and the 63-year-old firmly believes the latter is where hope lies in shedding light on the darker aspects of the job.

“How do I cope – apart from dreaming about playing golf? What keeps me going is research. It’s the quest to discover something that makes a difference,” he says.

“For me, the research career has been an important way to cope with the repeated disappointment in the clinic. As I’ve gotten older, I’m less on the front lines with patients and that keeps me sheltered a bit from the day-to-day reality. The status quo is the status quo; research is the only way forward.”

On that front, Cairncross is quarterbacking a national team of researchers at four main laboratories in Canada, with their headquarters located in Calgary. Relying on tumour cells from dozens of glioblastoma patients, researchers found a combination of drugs, including AZD8055 and Temozolomide – already taken by most glioblastoma patients – extended the life of lab mice by about 30 per cent.

If their laboratory findings hold true in patients, the discovery could prolong the lives of people with the aggressive and deadly type of brain cancer which is diagnosed in about 150 Albertans each year. The findings are poised to go to clinical trial, but given that most compounds aimed at targeting glioblastomas fail, Cairncross has learned to curb his enthusiasm with caution.

“We are pleased research has led us to this observation and want to test it in people who have glioblastoma, but time will tell,” he says. “It’s not that I’m not hopeful or excited to do the trial; it’s just tempered by 30, or 40 years in my case, of experience, where many are called and few are chosen.

True advances are infrequent, progress has been slow.”

Over the decades, Cairncross’s commitment to finding breakthroughs in understanding and treating brain cancer has been steadfast – a pivotal point in his career dates back to 1985 with the curious case of a patient named George.

George’s dramatic response to treatment prompted Cairncross to pursue what would be his claim to fame  – the worldwide use of chemotherapy to treat those with that particular type of cancer, oligodendroglioma. It also led to the discovery of molecular features in oligodendroglioma which are used globally to diagnose and tailor treatment for those with the disease. “It was a defining moment in my career,” Cairncross says. “I spent the next 30 years studying George’s kind of cancer and am one of the world’s authorities on that type of cancer.”

A few months earlier, his patient was a miserable man battling seizures, headaches and weakness on one side of his body because of the cancer. But much to Cairncross’s surprise, treatment melted the tumour away, giving George more time rather than an imminent death sentence. “I’ve told that story hundreds of times to colleagues and
students and almost anyone who would listen,” says Cairncross, still impressed by the case. “The response was so unexpected and dramatic … it was so shocking he was better.”

The magnitude of the discovery is not lost on Cairncross, either. “It would have been easy for that moment to slip by and not to have really noticed that this was extraordinary. I might have just kind of shrugged my shoulders. Some get a little better, some don’t and on we [usually] go to next patient,” he adds. “Nature was trying to reveal itself, and say, ‘This cancer that George has is highly sensitive to the chemotherapy you are giving.’ ”

Decades later, the opportunity to work with the researcher behind that discovery was a big lure for neuropathologist Dr. Jennifer Chan, who relocated to Calgary from Boston to be on the Cairncross team. “When I was a baby neuropathologist, we all knew his papers. He is essentially a household name,” Chan says. “He is kind of like a rock star.”

But his stardom of sorts comes without any diva-like baggage. “He is totally down-to-earth; there is nothing snooty about him,” she says. “He is just sort of a quiet, unassuming guy, but behind that he has visions. His opinions are sought by others who are basically movers and shakers in the field.”

That humble approach might be why he complements his research with front-line efforts. “I still see patients because, well, it kind of keeps me grounded and in touch with what’s important,” he says. “Patients have been a source of inspiration for my research – I get ideas about how one might tackle the problem in the laboratory.”

He has been recognized outside the lab as well, having been named Scientific Director, cancer research programs at the Universities of Alberta and Calgary, while also engaging with key research funding partners at the Alberta Cancer Foundation and Alberta Innovators Health Solutions.

“When I was a baby neuropathologist, we all knew his papers. He is essentially a household name,” says Dr. Jennifer Chan. “He is kind of like
a rock star.”

Over the years, radiation has become safer for treating those with brain cancer and chemotherapy combined with radiation can control many glioblastomas. Surgery has improved, too. “Any time the brain is operated on, you might die, wake up speechless, paralysed or with some trouble with vision,” Cairncross says. “These days you wake up fine and most of the time with a lot of the tumour out.”

“That is a doubling of the average survival and five-fold increase in long-term survival but the numbers are still terrible,” Cairncross says of slow progress on the treatment front. “We still don’t eliminate the disease except once in a blue moon. It’s not like some other cancers where there is a significant cure rate … where the treatment is noticeably better. In brain cancer the illness can’t be anticipated,” he says, eschewing any notion of advantage gleaned from early diagnosis. “By the time you have a hint of it, it’s a fatal disease. Probably in my entire career, I’ve seen a patient or two who I thought really had a glioblastoma and it was cured. Whenever we see a long-surviving patient, we are immediately suspicious the diagnosis was wrong.”

And so the work continues. Meanwhile, champions for the work Cairncross does, both in the medical and academic realm, are many – and rightly so. “He is a passionate believer that in order to get great health care we need great science behind it,” says Dr. Jon Meddings, dean of the University of Calgary’s faculty of medicine. “He practises what he preaches … he is a big-picture thinker,” he adds.

For now, there is a bitter balance between hope and history for those working in the field – between what might ideally happen and what statistics have shown. “The most difficult thing is seeing a brand-new patient, who, of course, is incredibly hopeful their illness can be eliminated,” Cairncross says.

“I don’t ever want to take away that hope but of course where I’m sitting, I have a different perspective on what’s most likely to happen to them,” he says. “When I’m with the patients, I am a glass-half-full person. I will describe how treatment has improved and continues to improve; some people have very good results with treatment and there is no reason why a patient shouldn’t be one of them.”

But he also knows the whole picture. “Privately, I don’t think anyone is satisfied with the improvements made to date. My colleagues want to do much better. The understanding of the science [behind how the disease works] is advancing rapidly. The treatment isn’t.”

Perhaps accepting current limitations of science, Cairncross takes comfort in smaller victories. “Most people who get brain cancers are just minding their own business. I’ve seen my share of sadness and heartbreak, but unfortunately it is a part of life,” he says. “I don’t take the treatment failure personally; it’s not my fault the tumour didn’t respond. The occasional patient does spectacularly well and that’s a great joy.”

Challenging as it might be, the scientist is quick to cite those with more taxing gigs.

“Going off to Africa and getting into one of those space suits, looking after Ebola patients and keeping your fingers crossed you don’t get it when it seems like you can get it fairly easily – those doctors are on a much, much more difficult path than I’m on,” he says.

We challenged Dr. Gregory Cairncross to finish these thoughts:

ON A DAY OFF, I LIKE TO take it easy.

TRAVELS: I’m looking forward to going to Hong Kong in six months. It’s such a neat city but I hope it’s not in chaos when I get there. And one day I want to go to Wimbledon and the Masters Golf Tournament. If I could do those two things, I would feel like a pretty lucky guy.

I LISTEN TO country and western. I like the hurtin’ songs. It’s good for my soul.

WHEN DINING OUT, I ORDER a nice glass of wine. I’m torn between doing the right thing by eating fish and trying to pretend I’m still young and ordering a steak.

I STRUGGLE WITH my age. I don’t know where the years went. One thing I will not be doing is working in my 80s. I just want to do other stuff, even if it’s nothing, even if it’s just looking at the sunset.

WHAT ARE YOU READING? Jonathan Kellerman. I’m not sure I like it yet. It’s detective/mystery stuff.

MY JOB HAS TAUGHT ME that every day you are healthy is a very good day.

WHAT I MIGHT DO IF NOT MEDICINE: I hope I’d be hitting golf balls, but I’d want to be good, like some of these young golfers.

ON MAKING A DIFFERENCE: I’m sure I’ve made a difference to the people I’ve tried to help in some way with their journey. This doesn’t make me special – I think a lot of health-care professionals do it day-in and day-out, and I do it off and on. 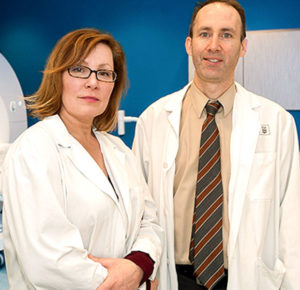 How a clinical trial gets to the heart of cancer