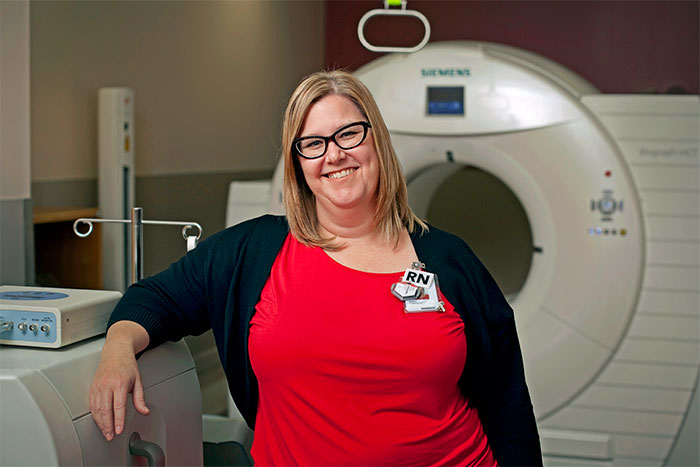 LIAISON: Karey McCann, in her role as nuclear medicine therapy and neuroendocrine tumour clinic co-ordinator at the Cross Cancer Institute, looks after all cancer patients and co-ordinates with five doctors on the Edmonton team as well as liaising with the team at the Tom Baker Cancer Centre in Calgary.
Photo Amy Senecal

As one of only two Canadian sites offering radioisotope therapy to those diagnosed with neuroendocrine tumours, the Cross Cancer Institute coordinates care for patients from across the country. Providing treatment and helping patients understand and deal with the unknown of a rare cancer diagnosis is a job not many could keep up with, but Karey McCann does so with dedication and strength.

“I think there’s still a lot that I can build into my role here, especially with patient advocacy and education. By the time the trial ends, maybe that’s when I’ll be ready to retire,” says Karey McCann.

For the past seven years of her 13-year nursing career, McCann has been the nuclear medicine therapy and neuroendocrine tumour clinic co-ordinator at the Cross Cancer Institute, working with a team of five physicians and one other research nurse. The 43-year-old Slave Lake, Alberta native came to her position after stints in pediatric oncology at the Stollery Children’s Hospital, as well as time in several U.S. cities where she was introduced to radioisotope therapy.

“Then I met Dr. Sandy McEwan, the guru of radioisotope therapy in Canada, and I’ve been back and part of this amazing program ever since,” McCann says. This year, McCann, who is responsible for co-ordinating and caring for all neuroendocrine patients at the Cross Cancer Institute in a program that’s a leader in its field across the country, became a CANO Boehringer Ingelheim Oncology Nurse of the Year Award nominee. On paper, McCann works a routine-sounding, Monday through Friday schedule, but she says it’s a position with challenges far beyond the everyday. “Nursing school didn’t prepare me for this – the job can be both difficult and inspiring, but it’s always gratifying,” she says. “I used to think I’d become a teacher, and while that didn’t happen, patient education is an important part of my work – so I think the job is a perfect fit for me.”

Patients ranging in age from newborn to age 90 from across Western Canada come to the Cross Cancer Institute to receive one of two types of radioisotope therapy – lutetium and mIBG – both forms of radiation treatment that target specific cells, shutting them down so they can’t multiply and divide, and both unlike chemotherapy which attacks healthy and cancerous cells alike. Lutetium is imported in vials from Holland, where there and across Europe and Australia the therapy has been regularly used for many years.

Still relatively new to North America, lutetium therapy is part of a long-term study at the Cross Cancer Institute. Co-ordinated by McCann and a colleague, the lutetium clinical trial started in April 2014, aiming to prove the efficacy and safety of radioisotope therapy over a 15-year period. The trial currently has 97 participants, but some 400 patients will be part of the program over the term. 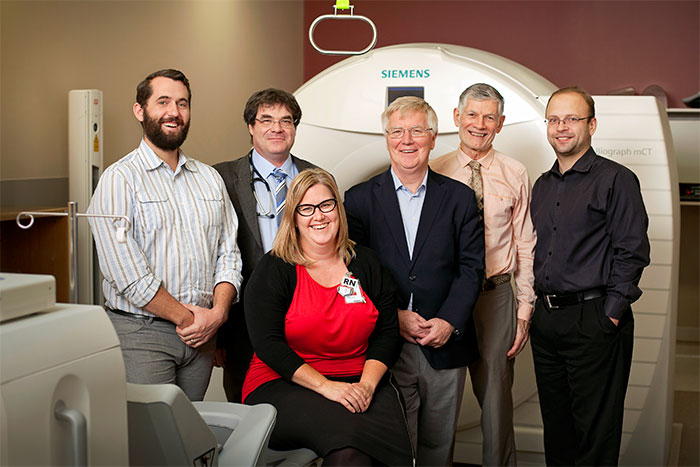 McCann might be seen as command central for those referred to the Cross Cancer Institute for neuroendocrine tumour treatment. She not only looks after all the patients diagnosed with the cancers, but also co-ordinates with the five doctors on the Edmonton team – experts in endocrinology, medical oncology, nuclear medicine, radiation oncology and surgery – and liaises with the team at Calgary’s Tom Baker Cancer Centre. “We’re lucky to have two teams in Alberta – other provinces don’t,” McCann says. “The physicians inspire me – the whole team does.”

The feeling is mutual among McCann’s colleagues. The tumour team at the Tom Baker Centre in Calgary works closely with the Edmonton referral centre, but Dr. Dean Ruether, leader of the provincial endocrine tumour program and a medical oncologist, says moving patients between Edmonton and Calgary or to Edmonton from further afield is handled by dedicated nurses like McCann.

“We’d not be able to do what we do without Karey,” Ruether says. “Her role is key, as she receives referrals, triages patients and assists in the clinic for treatments. This is a great area to work in. With exciting treatment developments and patient advocacy finding its place, it takes dedicated and passionate people like Karey and the entire team to make it work.”

Neuroendocrine tumours only represent around two per cent of all cancers, occurring mostly in patients with no risk factors and often starting in the lung or GI tract before metastasizing elsewhere. Because these tumours can mimic other hormone-related problems, the disease is often diagnosed quite late, when the cancer has already progressed in stage, size and location. Though numbers are relatively small – the Cross Cancer Institute has treated more than 160 patients with approximately 550 lutetium therapies since August 2000 and, since 1987, 375 patients with thousands of mIBG therapies – patients can live many years with their disease, returning to the Cross every 10 weeks or so for radioisotope treatment. 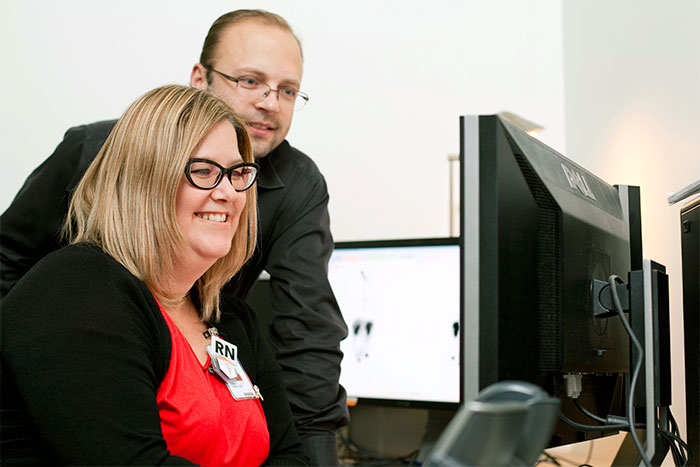 Surgery plays a big role in treatment, and sometimes external beam radiation and chemotherapy drugs do as well. But the highly specialized radioisotope therapies of lutetium and mIBG are seen as an effective treatment when the tumour is too large to operate on, or has spread to other areas. Both therapies are given intravenously, mIBG every 12 to 14 weeks, and lutetium every 10 to 12 weeks.

McCann arranges an overnight stay for patients with each treatment, so they can get scans and see where the targeted therapy went in the body. “Showing pictures and explaining what’s happening in their body is reassuring – it gives a peace of mind to patient and family,” she says.

McCann says that while, on average, patients live five years from diagnosis, she has known patients to live much longer – 10 years and beyond. “We just lost a fellow that was being treated for 14 years. It’s tough because we build bonds with patients,” McCann says. “But I love my job, and I feel lucky to have it. Patients are often inspiring to me – their attitudes and perspective – and there are many I’ll never forget.”

“We just lost a fellow that was being treated for 14 years. It’s tough because we build bonds with patients.”

McCann remembers a 28-year-old pregnant woman from Quebec who came to the Cross Cancer Institute with an inoperable tumour wrapped around her heart. The baby had to be delivered at 26 weeks, and today he’s a healthy five-year-old and his mom is seeing him grow up. “The woman’s courage and strength – I still remember that,” McCann says.

As a co-ordinator and educator, McCann has developed patient education materials for use across the province, and started half-day patient education sessions to answer questions and dispel myths about the disease and radioisotope therapy.

“I’m always looking at different ways to help patients support each other and advocate for themselves. We have tumour support groups that are considered small because of the rarity of the cancer, but our attendance numbers are big, so there’s definitely a need,” McCann says. “People want to know why their hair doesn’t fall out, or how to deal with family, friends or co-workers that don’t necessarily believe they even have cancer. Being socially shunned, or living with the unknown – these are difficult things for patients to cope with, and the lack of resources adds to the patient burden.”

As the lutetium trials continue, McCann says hundreds more will be referred to the Cross Cancer Institute to benefit from ongoing treatments and maintenance. “I think there’s still a lot that I can build into my role here, especially with patient advocacy and education. By the time the trial ends, maybe that’s when I’ll be ready to retire.”

Health of a System