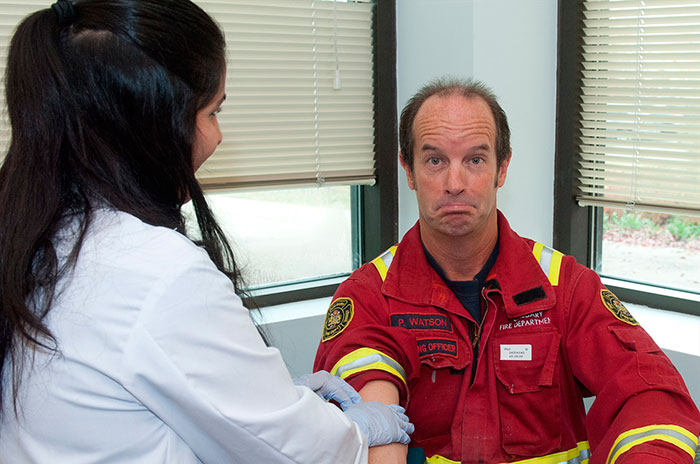 The Calgary Fire Department has issued a challenge to the province’s emergency personnel – take part in the Tomorrow Project.

The Tomorrow Project, a large, long-term project that aims to understand why some people get cancer and others don’t, is supported by the Alberta Cancer Foundation, Alberta Health Services and other provincial organizations. It’s been going on since 2000, and currently has more than 47,000 participants in the province. James Whitworth, the project’s study centre co-ordinator, says the goal is to have 50,000 participants, and that the fire department’s challenge is a big win in achieving that goal.

“This could snowball for us, and we’re hopeful that it does,” he says. The Tomorrow Project did an event with the fire department in October, which drew more than 40 firefighters who signed up for the study. “It worked out and became a fantastic event,” Whitworth says. “We saw a big uptake in enrolment based on that alone.”

The clinics that Whitworth helps arrange include regular blood and urine sample tests and physical measurements. Participants also fill out a health information form, and they are informed that they may be contacted in the future to do the process again. “It’s important that we do what we can at this point to make things better in the future,” says Whitworth. “If I had my way, we’d be in with every police department, fire department and EMS in the province’s mid to large cities.”

Whitworth says they’re also pleased to work with the fire department because the majority of the participants so far have been female, and fire departments (and other emergency professions) are a predominantly male workplace. “We just don’t have enough [male participants], and we need the biggest cross-section of individuals as possible.”

All participants in the Tomorrow Project have never had cancer and are between 35 and 69. The researchers will compare and track those participants over years, or decades, and use that data to help understand more about cancer causes.