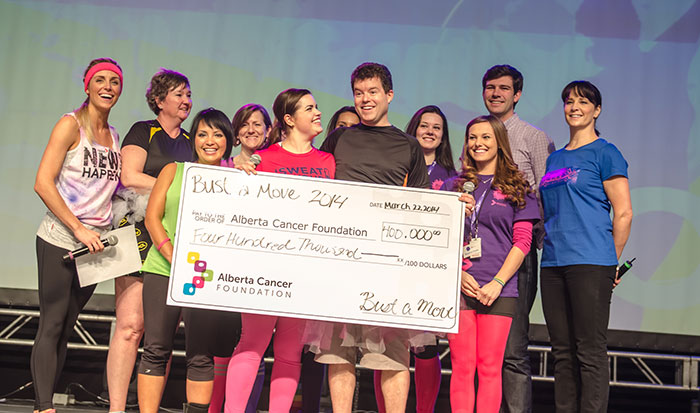 The worldwide phenomenon that is Bust a Move for Breast Health is back again this March, bringing together groups of people all over the world to sweat it out for charity. Started in Halifax in 2010, the event takes place in cities across Canada as well as in Brisbane, Australia. Bust a Move is a community fundraiser that sees teams or individual entrants raise $1,000 for cancer charities in their community.

On event day, everyone gathers in a large space for what Alberta Cancer Foundation development officer Breanne Kraus calls a “six-hour fitness extravaganza.” The event brings in six instructors that hold classes on everything from yoga to Zumba. “The instructors are raring to go this year,” says Kraus, of the March 21 event in Edmonton. All funds raised for the event will go to the Cross Cancer Institute.

Bust a Move has earned a strong following over the years, and participants often arrive decked out in tutus, boas and other crazy costumes. Every year, the team arranges for a celebrity instructor to show up and get the event off to a great start – this year participants can expect a secret local guest, according to Kraus. Registration is now open for Bust a Move for Breast Health 2015. For more information, visit bustamove.ca.