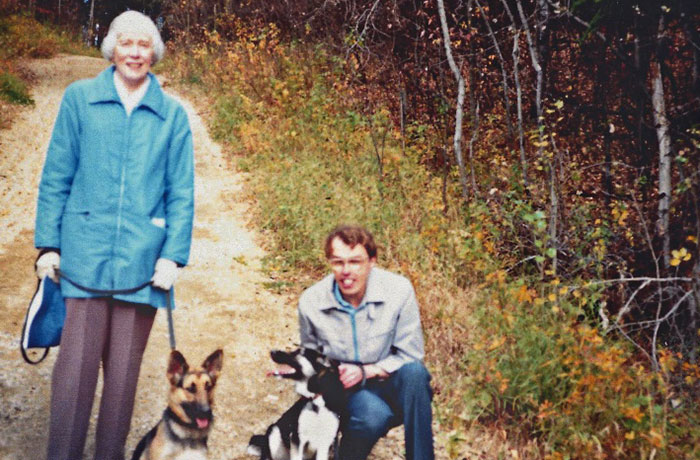 PROUD SON: Keith Brown, shown here in an undated photo with his late mother Betty Brown on a walk with the family dogs, has created a studentship in her honour.

Dr. Roseline Godbout leads us into a sparsely lit research lab in the Cross Cancer Institute, where computers occupy enough space to make it cramped for our small group. Jiali Luan sits down in front of a computer screen and explains what he’s been working on under Godbout’s supervision; wrapping up his four-month studentship, he recently gave a presentation of his research on the enzyme DDX1, a family of proteins that participates in DNA repair. As the beneficiary of the Alberta Cancer Foundation’s 2014 Betty K. Brown Summer Studentship, Luan is conferred a special privilege today – our group’s most enthusiastic member, Keith Brown, established the very studentship Luan has been working under.

“I wanted to give hope to patients that would otherwise have none at all,” says Keith Brown.

Jane Weller, development director at the Alberta Cancer Foundation, gives our group a tour of the facility, and Brown is quick to ask both Godbout and Luan detailed questions about their findings. “It’s unfortunate you didn’t go into research,” Godbout tells Brown. “You think like a scientist.” Naming the studentship after his mother, whose first occurrence of breast cancer was in 1965, Brown stipulated only that the research be pertinent to patients currently under treatment. “I wanted to give hope to patients that would otherwise have none at all,” he says. Brown established a different studentship under his father’s name (Dr. Gordon Brown, who was voted one of Alberta’s top 100 physicians in 2005) which has been offered since 1984, so he knew the benefits. Today, however, he gets to see the effects of the studentship he created in honour of his mother, and he’s overjoyed.

Over the summer, Godbout and Luan studied the correlation between overexpression of DDX1 and early relapse in breast cancer patients. “We want to understand what DDX1 does so we can use different ways of targeting it and see if that can be used as a method of treatment,” Godbout says. “If it’s just a matter of killing cancer cells, that’s easy – the key is that if you kill cancer cells, you kill normal cells also. We need to become very clever at identifying targeted approaches.” She and Luan both see the research as having wide-ranging implications for treatment of all kinds of cancers.

As the tour ends, Weller describes how she and Brown consulted with doctors to create the Alberta Cancer Foundation studentship. “The message keeps coming through, over and over – the most impact you can make in cancer research is in the trainee awards, the graduate programs and the fellowships,” she says. “For the future of the Alberta Cancer Foundation’s fundraising, this is a priority. Students are the fuel for the research engine.” Godbout backs her up, praising the passion and enthusiasm of the summer students, who need a GPA of 3.9 or 4.0 to even be eligible to receive the funding. As a result, “The calibre of students is incredible,” she says. “And a lot of them will be interested in medical school because they have the grades for it.” These programs also kindle an interest in research, which increases the likelihood of important collaborations and discoveries down the road.

Not to put pressure on Luan, though he clearly thrives in the face of challenge. He was born in northeast China and came to Edmonton in 2000, and aspires to be the first doctor in his family. He’s engaged in his work and recommends the experience of being a summer student. “I’d do it again,” he says. “It’s a great program.”

As Godbout heaps compliments on Luan’s work ethic, it’s evident that Brown is glad to have Luan as a beneficiary. Everyone involved in the studentship is excited to see the project continue and happy to be part of the Brown family’s legacy. “Today was a good day,” says Brown, as he shakes Luan’s hand.

The Scare Down There