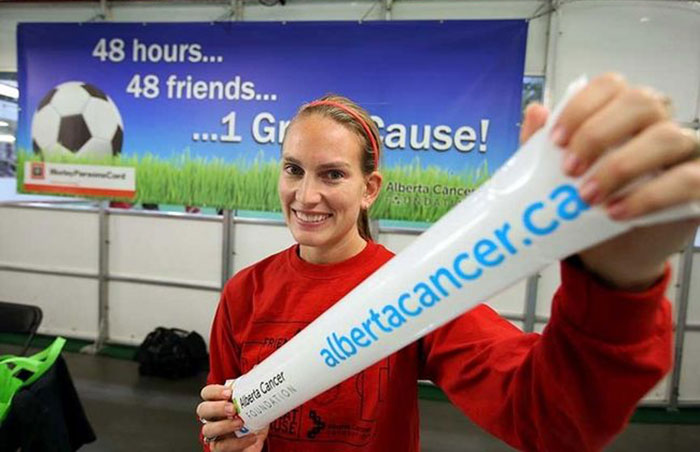 Athletes from the Strathcona region have kept their reputation for hours of competitive playing alive, by setting another record for the World’s Longest Indoor Soccer Game.

The organizers of the Alberta Cancer Foundation’s WorleyParsonsCord World’s Longest Indoor Soccer Game have a good track record for organizing really long matches on the pitch. In both 2008 and 2012, they held the world’s longest games outdoors, clocking in at 33 and 38 hours respectively at the Strathcona Athletic Park. Combined, those two events raised around $140,000.

This year, their goal was to raise $48,000, and they held the event indoors at Sherwood Park’s Millennium Place. They played a 48-hour game and managed to raise over $58,000.

“For the first hour, everyone played together, and then they took shifts so that people could take a nap or eat,” says Kaitlin Fox, a development officer at the Alberta Cancer Foundation. “They did that for about 46 hours, and then for the last hour everyone jumped on the field together.”

The participants had been recruited by organizers through a combination of the two previous games and word of mouth, with most of the players coming from Calgary or Edmonton. The money raised will be going to the cellular imaging facility at the Cross Cancer Institute. “It’s really translational research,” says Fox, of the technology that gives doctors the ability to see a tumour react to different treatments in real time and how they respond to different treatments. The discoveries made in this facility will translate from lab bench to bedside and lead to incredible advances in patient care and treatment.”